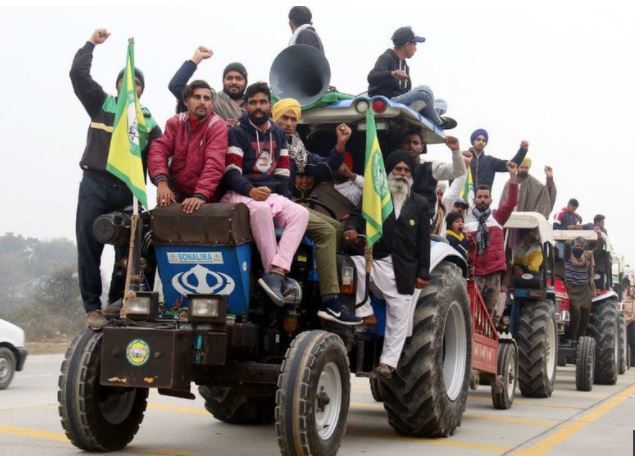 As the country celebrated its 72nd Republic Day, the protesting farmers begin marched on both the tractors as well as on foot to protest against the Centre’s three farm laws passed by the Parliament in September. Thousands of protesting farmers entered the national capital on their tractors under heavy security on Republic Day, even as they announced a foot march to Parliament on February 1, when the annual Budget is presented, to press for their demands including a repeal of the Centre’s three farm laws.

Heavy security has been deployed in view of the unprecedented ‘Kisan Gantantra Parade’ that will move into Delhi from three border points Singhu, Tikri and Ghazipur. Groups of protesting farmers camping at Singhu and Tikri border broke police barricades to force their way into the city.

Violence has been reported from several parts of Delhi with protesters clashing with the police. The Delhi Police on Tuesday resorted to lathicharge and tear gas at the Singhu border after protesting farmers breached barricades set up to thwart them from entering the national capital. Earlier, the Delhi Police had granted permission to farmers to hold the tractor rally with 37 conditions.

The farmer unions protesting for nearly two months against the three new Central farm laws had promised that their tractor parade will start only after the official Republic Day parade on Rajpath concludes. The police had given farmers permission to enter the city and hold their tractor parade on the Outer Ring Road after the official Republic Day parade at Rajpath.

In Sonipat, on the other hand, the situation remained peaceful with the youth singing revolutionary songs on their tractors and jeeps. The massive tractor parade not only coincides with Republic Day, but also the completion of two months of farmers’ protests at Delhi’s borders against the Centre’s three farm laws. While, the police have limited the parade to 5,000 persons and 5,000 tractors, farmers are expecting some two lakh tractors to participate.

On Monday, hundreds of tractors decorated with balloons and national flags for the parade have entered in Delhi from neighbouring states. Not just tractors, the protesters are on foot and on bikes as well take part in the protest. Protesters reached Pragati Maidan area from Ghazipur border.