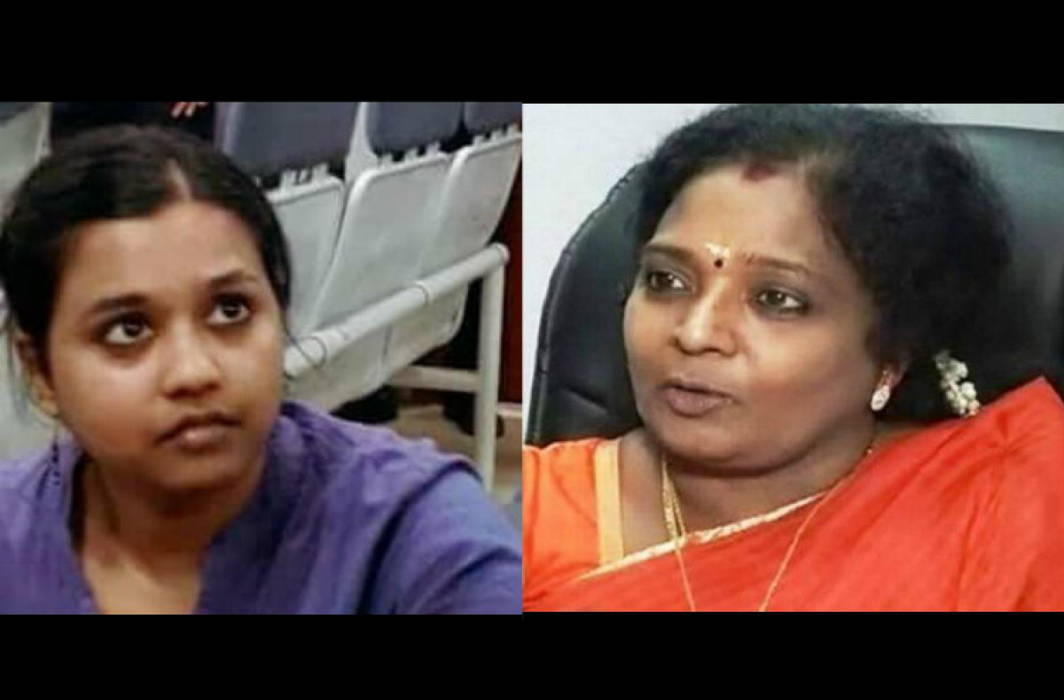 A 28-year-old research scholar of Canada, Lois Sofia, arrested at the Tuticorin airport on Monday for shouting “fascist BJP government down down” on a flight, in the presence of Tamil Nadu BJP president Tamilisai Soundararajan, has been released on bail.

The arrest had led to intense outrage against the police and the AIADMK government. Reacting to the arrest, DMK chief MK Stalin accused the Tamil Nadu government of stifling the right to free speech.

Targeting the AIADMK-led government in the state, Stalin also said that if it was going to imprison people voicing dissent, then he would repeat Sofia’s slogan. “The Tamil Nadu government’s anti-democratic actions, against the right to free speech, are highly condemnable. She must be released immediately. How many people will be imprisoned if you arrest everyone who says that? I will also say it. ‘BJP’s fascist government down, down’,” Stalin tweeted.

News agency ANI reported that BJP Tamil Nadu President Tamilisai Soundararajan got into an argument with a co-passenger at Tuticorin airport. The passenger who was detained had allegedly raised ‘Fascist BJP Govt down down’ slogan.

Sofia allegedly shouted the slogan when Soundararajan, seated in the front row, came near her to take her bag. Enraged by this, Tamilisai Soundararajan engaged in a verbal fight with the student and later with the police who were stationed in the airport and had tried to calm her down.

A video recorded at the airport shows the BJP leader asking angrily: “How can she shout like that? This is not a public forum.”

“When I am taking my bag, a customer shouts ‘BJP’s Fascist government down down’. Is that freedom of speech?” she is seen asking in the clip.

Soundararajan said later to reporters: “She was not an ordinary passenger, I suspect some extremist organization behind her.”

Sofia, who was travelling with her parents, was taken into custody after the BJP leader filed a complaint with the airport police.

Sofia was charged under IPC Sections 505 (statements conducing to public mischief), 290 (public nuisance) and Section 75 of the Tamil Nadu City Police Act and the case was being handled by the All Women Police Station at Tuticorin.

A Thoothukudi court Tuesday granted bail to Lois Sofia, a 28-year-old studying in Canada, a day after her arrest at Tuticorin airport.

Sami, the student’s father has also filed a police complaint against the Tamil Nadu BJP chief and a few others for “criminal intimidation”. That case has not been registered by the police yet.

Sami says he and his wife had received their daughter at the Chennai airport and were flying with her to Tuticorin. When they arrived at Tuticorin, he says, his daughter was surrounded by men and abuses were thrown at her. The family was reportedly kept in a room for safety.

“My wife Madhuri and I received our daughter at Chennai airport and we were flying from Chennai. After we landed at Tuticorin, she (Sofia) saw the BJP leader and said ‘fascist BJP government down, down’. She didn’t utter a word other than that. But when we reached the terminal, Tamilisai and some 10 men who received her at the airport surrounded us and bullied my daughter with abusive words. They issued death threats. Finally, the airport police came to our help and secured us in a room.”

“For more than 8 hours, police kept my daughter in station for inquiry. She didn’t use any derogatory remarks about Tamilisai or anyone. She just said “Fascist BJP Down down”, which is purely freedom of expression. Now, I have lodged complaint against Tamilisai and others for threatening us. So far, no action has been taken,” he said, according to media reports.

Sofia, a writer and a mathematician, had earlier participated in campaigns against the Sterlite Copper Plant in Tuticorin and the Chennai-Salem eight lane expressway, said media reports.

In a tweet before her arrest, Sofia had posted: “I am on a flight with Tamilisai Soundararajan and really want to shout out ‘Down with Modi – BJP – RSS fascist government’. Will I be kicked off the flight?”