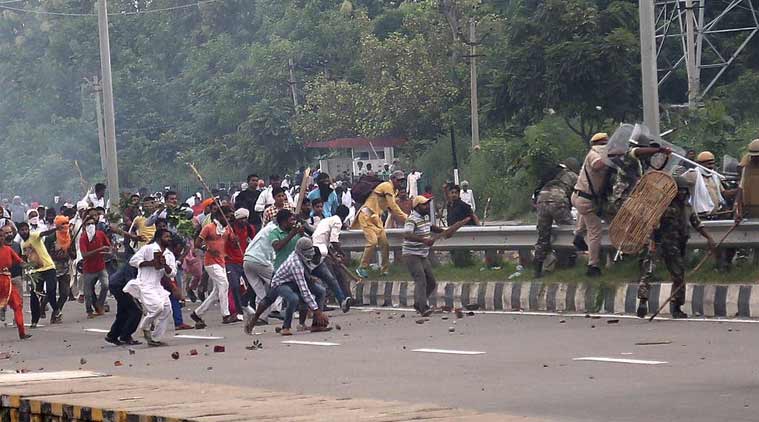 Despite threats of widespread violence by followers of the Dera chief in the run up to his conviction, BJP’s Manohar Lal Khattar government in Haryana fails to contain aftermath of the Panchkula court verdict. Violence spreads to Punjab, Delhi, Rajasthan and Uttar Pradesh as government’s claims of preparedness in dealing with the verdict’s fallout are exposed

The writing on the wall had been clear for the past week.

Threats of violence and arson had been issued by followers of self-styled Godman, the controversial, ostentatious and politically connected Dera Sacha Sauda chief Ram Rahim Singh ‘Insaan’, should he be convicted in the 2002 rape case filed against him. Haryana’s Manohar Lal Khattar government had repeatedly claimed, even till Friday morning, that it was prepared to deal with any aftermath of the verdict. The Army had been called in to secure Panchkula – where the local court’s verdict was due – and the state police had been deployed in huge numbers. Section 144 (curfew) had been imposed in various parts of the state.

Yet, as soon as the Panchkula court pronounced its verdict – holding the Dera chief guilty of the charge of rape – Haryana burned, the fire spread quickly to neighbouring states of Punjab, Delhi, Rajasthan and Uttar Pradesh. In clashes with the police and security personnel, over 30 civilians – including Dera arsonists and innocent people caught in the mayhem – were murdered by 8 pm on Friday, a majority of them in Panchkula. Over 200 people have been injured. The casualty figures are still rising with every passing hour.

The Punjab and Haryana High Court has ordered that the properties of the Dera Sachha Sauda will be attached and the outfit will have to compensate for the loss to property caused in the riots.

Late in the evening, by when Section 144 had been imposed across different riot-hit parts of Haryana, Punjab and Uttar Pradesh, and public outrage over the killings and arson had given rise to vociferous demands by common citizens and Opposition parties alike for the Haryana chief minister’s resignation, Khattar emerged to appeal for calm. Why, despite all signs of trouble, the chief minister had failed to press in adequate measures to control the rioting was something that Khattar was predictably silent on.

Adding insult to injury was Union home minister Rajnath Singh who instead of batting for a full scale inquiry into lapses by the Haryana government, the state’s police and other law enforcement agencies claimed that the Khattar administration “cannot be held responsible for the violence”. Similar and worse claims were made by ministers and officials in the Khattar administration ranging from “what can be done about this”, “we can’t be blamed”, “this is unfair scrutiny”, etc.

Almost as if the Union and Haryana government’s ministers and officials were following a pre-written script, Union home secretary Rajiv Meharshi described the tense situation as “serious but not yet out of control”. By the time Meharshi made this comment, 14 deaths had already been reported, the violence had already spread to the neighbouring states, coaches of at least two trains (one in the national capital’s Anand Vihar Railway station), several buses and public transport vehicles, buildings and government property had been gutted by arsonists. But according to the Union home ministry which is the supposedly the guardian of the country’s internal security, the situation was “still not out of control”. Did the home secretary Meharshi not know the extent of the violence or was he deliberately underplaying it?

The Haryana government, which has had a very public rapport with the now convicted Dera chief – who during the Haryana assembly polls in 2014 had appealed for votes for the BJP – had made an open display of its willingness to play along with the gameplan of Ram Rahim and his supporters. What else would explain allowing the Dera chief – who also enjoys a Z+ category security cover given by the government – to drive from Sirsa to Panchkula in a convoy of over 100 vehicles, filled with his rabid followers, despite imposition of curfew in various places that fell en route?

There were also reports from media persons deployed in the conflict areas that although several companies of the Army had been deployed in and around Panchkula and Sirsa, the Army personnel had been instructed to not use force – not even the famed pellet guns – against the violent protestors. Tear gas was the weapon of choice to disperse those who were armed with swords, crude petrol bombs and other weapons.

As the riots spread, till well past 8 pm on Friday night, the Centre and Haryana government were clearly still trying to get a grasp of the worsening law and order situation. There had been no appeal for peace and calm from Prime Minister Narendra Modi and his ministers, nor had the violence stopped.