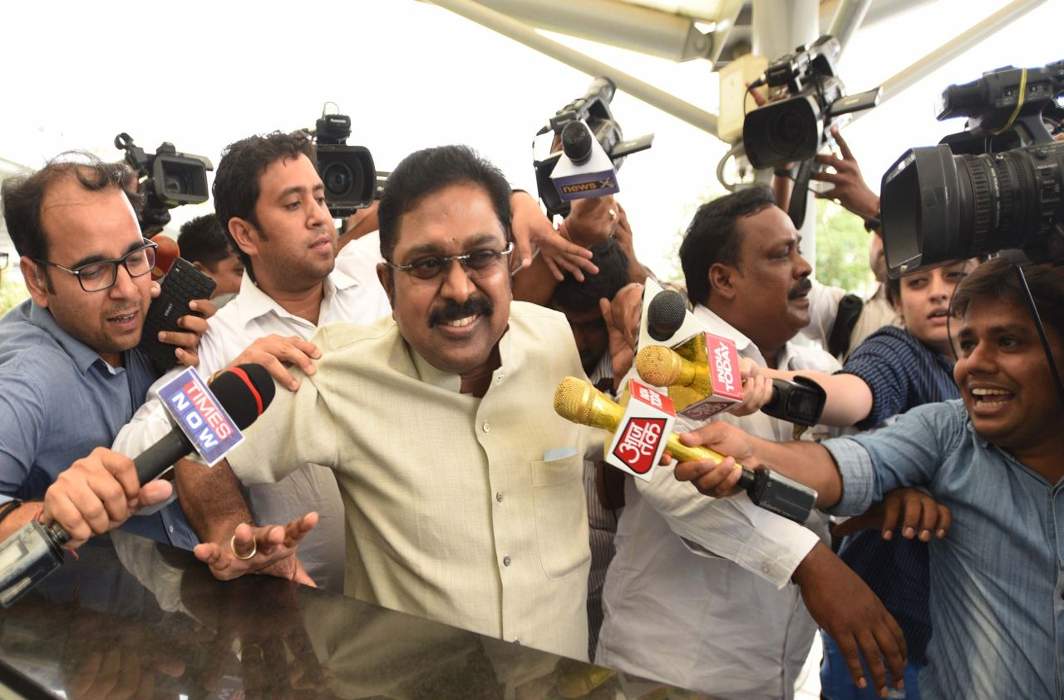 It is a shame that Tamil Nadu, once the frontline state in development and governance, has set the gold standard in electoral corruption in the over-hyped RK Nagar by-election. The institutionalization of corruption in the electoral process appears to be complete. All political parties in future will have to factor this alarming rise in “cost” of harvesting votes for money, and ensure ingenious ways are found to keep out of reach of the long arm of law.

In the run up to the election, Indian (or is it Tamil?) jugaad came into full flow among the representatives of the three contenders – TTV Dinakaran, AIADMK and DMK – in “passing the buck” to the voter. The visual and electronic media reports showed techniques varying from rolling three Rs 2000 notes (so conveniently produced by RBI after DeMo) and passing it surreptitiously to the voter through a handshake or a back slap or tuck it in a bunch of bananas.

In forthcoming elections the “operational managers” of political parties in the RK Nagar by-election, who used ingenious ways to indirectly pay money to the voter can be useful in running tutorials for the benefit of politicians from other states. The impunity with which they flaunted their operations in the so-called TV sting operations, showed they believed they were beyond the pale of law.

But the real danger from the election was: people have become completely cynical about accepting money as an essential quid pro quo (no more an evil) for exercising their votes. We found during the election campaign, ordinary people discussing the going rate for votes in four figures, rather than considering the merits and demerits of candidates or political parties. Voting for money appears to be the done-thing.  Our maid watching the TV news on the election, said she hoped for a by-election soon in her area so that she would become richer by Rs 10,000! Even the middle class voter, who usually acts holier than thou, would probably line up in the next election to collect his largesse for voting for a political party.

Money for votes is nothing new in India. My father contested the district board elections in the 40s as a Congress party candidate. His opponent, a toddy contractor, from the Justice party, was my father’s patient. So soon after he won the election, he visited us to seek my father’s blessing. His unabashed advice to my father was: “Doctor Sir, you wasted your breath talking to these people about Gandhi and Nehru. You see, I beat them with silver chappal (silver rupee) and they voted me.”

Probably, he was exaggerating the use of money power in elections in those days. Democracy was in infancy then; people took pride in exercising their new found right to vote. They believed in the values of fair play, despite caste leaders’ clout. And many leaders with unimpeachable character were elected by popular vote, as some of them still do. Unfortunately, continuous exposure to political corruption has enabled cynicism and stoicism to replace ideology and commitment to democracy among the voters. Consumerism has vetted the appetite for making easy money. So elections are now marketed with attractive freebies, which has become a norm in Tamil Nadu elections. Combined with lack of accountability of administration and absence rule of law, electoral politics has come to mean picking the best of the bad lot. And money received gratis acts as the grease to the gear wheel to push the voter to join the process.

The RK Nagar results were a moment of truth to the EPS-OPS binary ruling the state. The surprise election of TTV Dhinakaran, has brought the man they were trying to wish away to the front rank among AIADMK pantheons. The manipulative leader from the Mannargudi group, showed he was a better manager of elections; he could win it even without the two leaves, the talisman which EPS-OPS group hoped would win them the elections. The duo, despite ruling the state and indulging in their own share of money-play, proved to be inept in getting through to the voter.

By now they would have realized that mere chanting of Amma’s name in every sentence they speak, was not enough to gain the trust of the voter. TTV Dhinakaran came out during the campaigning as an affable, cool and confident man who was in full control of the situation.  On the other hand, E Madhusudhanan, an octogenarian leader of the AIADMK candidate, looked and acted past his prime.

All eyes are on the uneasy AIADMK coalition that rules from Fort St George, after Dhinakaran in his victory speech declared himself as the “true political heir” of the late J Jayalalithaa. He has vowed to bring the EPS-OPS government “within three months.” He may well do it. The DMK coming third in the contest showed it has not been able to defuse the lingering effect of the late Amma’s shadow over Tamil Nadu politics.

The election of Dhinakaran could herald political realignment in the state. Already, defectors from the ruling faction have shown their readiness to jump the ship. Will he make a good chief minister, even if we ignore the cases pending against him? This is a difficult question to answer; I am reminded of what Abraham Lincoln said: “Elections belong to the people. If they decide to turn their back on the fire and burn their behinds, then they will just have to sit on their blisters.” So I suppose, as a resident of Tamil Nadu, I have to learn to sit on my blisters.