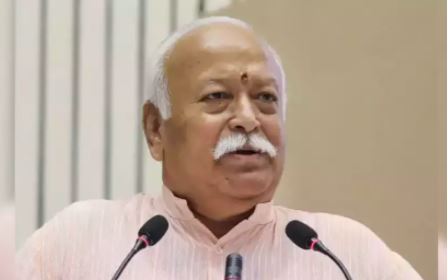 Mohan Bhagwat, the Rashtriya Swayamsevak Sangh Sarsanghchalak, has said Indian Muslims are the most content in the world. Praising the diversity of India, Bhagwat said India is the only country in the world where people from different faiths have lived together for a long time.

In an interview to Mumbai-based Hindi monthly Magazine Vivek, Bhagwat said India has allowed space for all religions since Partition while Pakistan denied the rights of those who are not Muslim.

Commenting on the status of Muslims in India, Bhagwat said there were many Muslims in Maharana Pratap’s army who fought against Mughal Emperor Akbar at the battle of Haldighati. In the past, everybody stood together at every turn of history whenever there was an attack on the country’s culture.

Ensuring the safety and security of Muslims in the country, Bhagwat said nobody has done anything wrong to them. They have got all the rights here unlike Pakistan and the Constitution of India has ensured space for everyone irrespective of caste, creed and religion. Bhagwat said a Hindu has nothing to do with those who believe in one God.

In response to a question on ideal economic models for the country, he replied both capitalism and socialism have failed to deliver the goals. Now, the time has come to look forward to the third way of dharma to regulate money and desires. He said RSS believes in synergy between the individual, the world and the universe.

Asking about the restoration of Hindu temples at Kashi and Mathura, Bhagwat said the RSS does not believe in launching movements and telling dates. He clarified that the RSS didn’t launch the Ram Janmabhoomi movement, it was carried out by society for quite a long time but due to some specific circumstances, it took time to be resolved. Launching movements is not a part of Sangh agenda which believes in working towards changing the hearts of people silently and peacefully, he said.

Regarding construction of the Ram Temple at Ayodhya, he said the Ram Janmabhoomi movement came to an end the day the trust was formed. He added that India has a number of temples to worship or perform rituals but it is the reality that these temples were demolished to destroy the values of this nation.