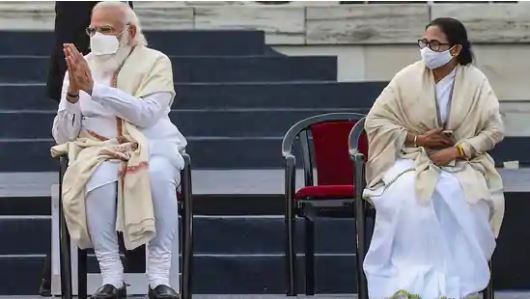 The Rashtriya Swayamsevak Sangh on Wednesday said the RSS does not support Jai Shri Ram slogans at an event in Kolkata to mark the 124th birth anniversary of legendary freedom fighter Subhas Chandra Bose. Distancing from chanting Jai Shri Ram, the RSS said those who shouted Jai Shri Ram at the event must be identified to find out whether it was an attempt to sabotage the event in Kolkata.

Prime Minister Narendra Modi and chief minister Mamata Banerjee attended the programme which ran into a controversy when Banerjee refused to speak in protest against the crowd that began chanting Jai Shri Ram on January 23.

Jishnu Basu, general secretary of Bengal RSS told the reporters that the slogan hailing Jai Shri Ram should not have been shouted at a government event organised to pay homage to Netaji. He said that the Sangh is unhappy with what happened in the event of towering personality like Netaji.

When the crowd started chanting Jai Shri Ram after West Bengal Chief Minister Mmamata Banerjee had refused to say anything in the event on Netaji organized by the Central government. Thanking Prime Minister Narendra Modi and the Union culture ministry for holding the programme in Kolkata, Banerjee had said this is a government programme not a political programme. There has to be dignity. It doesn’t behave anybody to invite people and insult. He concluded her speech saying don’t want to speak anything. Jai Bangla, Jai Hind.

The state’s ruling Trinamool Congress said Jai Shri Ram slogans at the event were condemnable. The Trinamool MP Saugata Roy said that the sloganeering at a function held to celebrate the birth anniversary of Netaji was an insult to the patriot. This is the only reason why the RSS has reacted.

The controversy comes at a time when the BJP and the TMC are locked in fierce battle for the assembly polls slated for the first half of 2021.