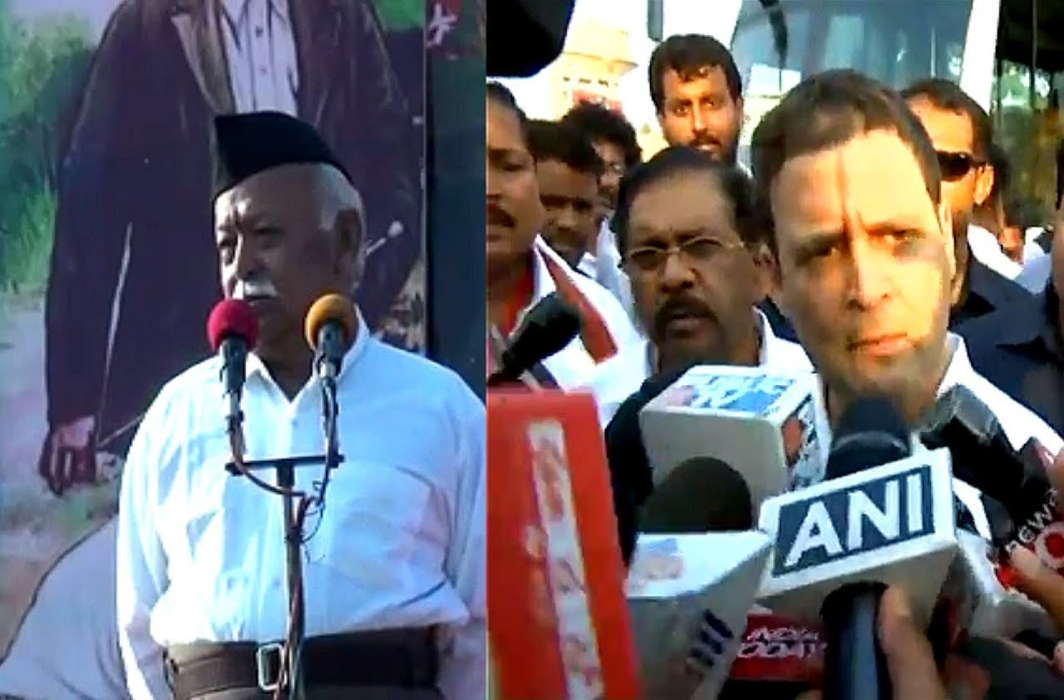 The RSS may invite one of its sharpest critics, Congress president Rahul Gandhi, for an event next month in Delhi, said reports in the media.

Apart from the Congress president, several other opposition leaders, like Sitaram Yechury of the CPI(M), are also likely to be invited to a three-day lecture series of its chief Mohan Bhagwat on the theme, ‘Future of Bharat: An RSS perspective’ to be held between September 17 and 19, reports said.

Indications that Gandhi could be invited came on a day the RSS criticised him for drawing parallels between the Sangh and Islamic radical outfit Muslim Brotherhood.

Giving details of the September event, which would be held at Vigyan Bhavan, RSS prachar pramukh Arun Kumar said, “Bhagwatji will address and interact with select audience comprising prominent citizens on ‘Future of Bharat: An RSS perspective’ in a three-day lecture series.”

Kumar said people across the country wanted to know and associate with the RSS.

“This lecture series has been organised in this context… sarsanghchalak (RSS chief) Mohan Bhagwatji will present the Sangh views on various contemporary issues of national importance,” Kumar said.

Replying to a question on whether Gandhi will also be invited, Kumar said the list had not been finalised, reported News 18.

“It is our prerogative to choose who to invite or not. Leave this to us… But people from all walks of life, including from different political outfits, ideologies and religions, will be invited,” he said.

Earlier in June, former president Pranab Mukherjee had attended an event at RSS headquarters in Nagpur and addressed the outfit’s members, a move that had upset many Congress leaders.

Rahul Gandhi himself had not commented on the invite to Mukherjee and, after the former president’s speech, however, the Congress said Mukherjee was able to show a mirror to the RSS.

RSS is a frequent target of attacks from Rahul Gandhi. The ideological mentor of BJP, RSS was the focus of Gandhi’s attack during his recent visit abroad.

In his latest comments made in London, the Congress chief said the RSS’s idea was “similar to the idea of the Muslim brotherhood in the Arab world” and went on to draw parallels. The comparison provoked a furious response from the BJP, which demanded an immediate apology.

Rahul Gandhi also alleged that the RSS was trying to change the nature of India and capture its institutions.

The Sangh said the Congress chief cannot understand the saffron outfit as he does not know India.

Responding to a question on Rahul’s remark during a press conference, RSS all India Prachar Pramukh Arun Kumar said if the former had the clear idea of how the world was fed up with the Islamic State, the Muslim Brotherhood and Muslim terrorism, he probably would have not made such a comparison.