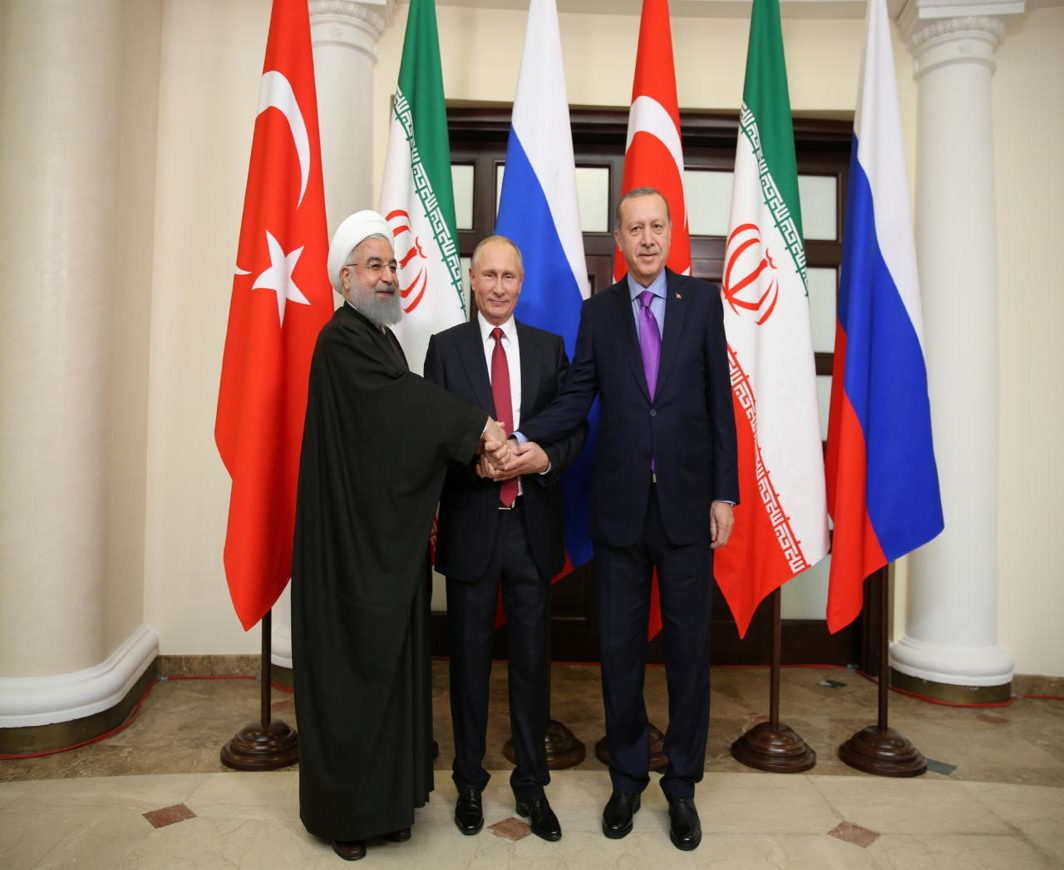 Rival groups to sit across table in Sochi before Nov. 28

The outline for political process for setting Syria’s future was discussed among Russian President Vladimir Putin and his Iranian and Turkish counterparts who have supported a proposal to hold a “Syrian people’s congress”  where Bashar al-Assad government officials and opposition figures were expected to across the table.

According to Aljazeera, this was announced by Russian President that the leaders of the two countries have agreed for the proposed congress. Iran has played important role in eradicating terrorists from Syrian territories by providing military advisors while Turkey has recently changed sides. Most overseas terrorists made their way into Syria and Iraq after landing in Istanbul. Turkey was also considered to be supporting anti-Bashar al-Assad governments.

President Putin hosted his Iranian and Turkish counterparts; Hassan Rouhani and Recep Tayyip Erdogan,  at a time when some Syrian opposition groups met in Riyadh before the proposed United Nations-sponsored talks in Geneva.

The Russian President, while talking after the trilateral summit, which was preceded with detailed official level interaction, said “The congress will look at the key questions on Syria’s national agenda.” Rouhani and Erdogan were sitting next to him in Sochi, a Black Seas resort.

“First of all, that is the drawing-up of a framework for the future structure of the state, the adoption of a new constitution, and, on the basis of that, the holding of elections under United Nations supervision,” he added.

Putin said he believed a “new stage” had been reached and warned that achieving a political solution in the Syrian crisis would require compromises from stakeholders.

The proposed congress is expected to be held in Sochi prior to the next round of Geneva talks on November 28.

Earlier, Russian leader had hosted Syrian President Bashar al-Assad in Sochi on Monday, who briefed him about the end of military operation against terror groups and thanked Russia for their support in fight against terror in his country.

Russia, Iran and Turkey issued a joint statement underlining the need for all warring sides to release prisoners and hostages, hand over bodies and create the suitable conditions to achieve a lasting truce.

The three leaders also urged international community to provide humanitarian aid and help in clearing Syrian territory of land- mines and restoring the infrastructure destroyed during the conflict.

Hundreds of thousands of people have been killed and  more than 12 million people were displaced during seven-year long crisis.

The three countries are the sponsors of the ongoing talks between Syrian government and opposition groups in Kazakhstan’s capital, Astana, as well as act as guarantors for the establishing four “de-escalation zones” across the country.

Erdogan had, till recently, appeared reluctant to support Putin’s idea for a congress bringing all rival groups for holding a national dialogue.

He adds, “This congress would sit in the middle, but it suggests that Putin is trying to shape the future of Constitution of Syria ahead of any future Geneva talks.”