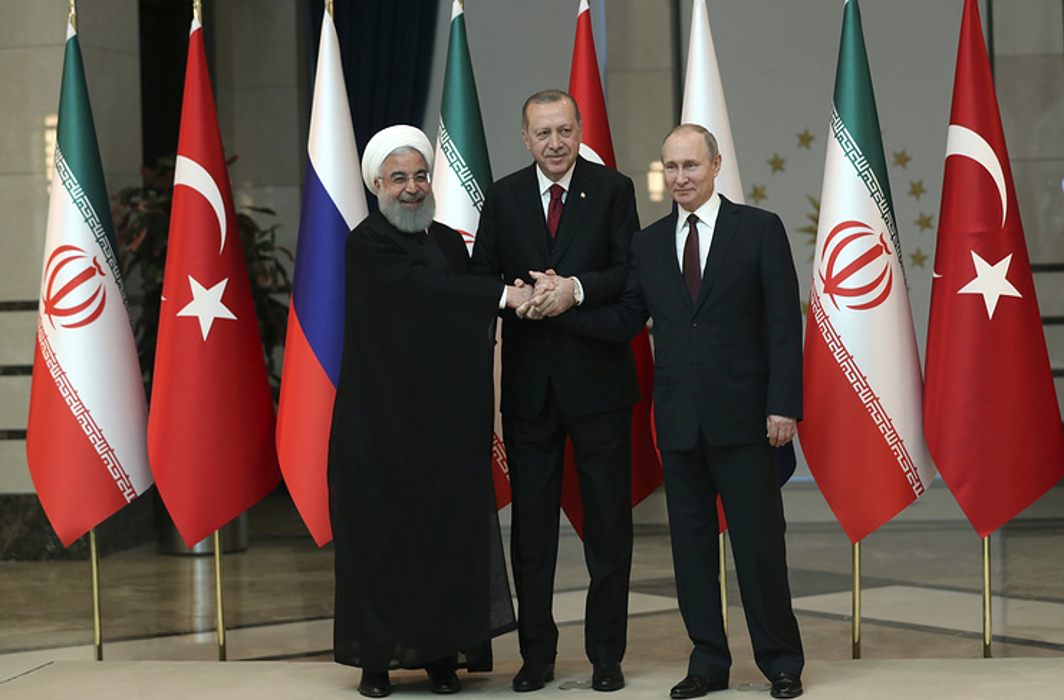 They oppose US for any geographical changes

Presidents of Russia, Turkey and Iran have reaffirmed their support to maintain the sovereignty, independence, unity, territorial integrity and non-sectarian character of Syria and expressed  commitment to work toward achieving a sustainable ceasefire, bringing peace and stability in that country.

According to Russian official news agency TASS, the joint statement signed by Vladimir Putin of Russia, Recep Tayyip Erdogan of Turkey and Hassan Rouhani of Iran at talks in Ankara on Wednesday said that separating terrorist groups from the armed opposition in Syria is crucial for protection of civilians,

The three leaders “Reaffirmed their determination to continue their cooperation in order to ultimately eliminate Daesh/ISIL, Nusra Front and all other individuals, groups, undertakings and entities associated with Al-Qaeda or DAESH/ISIL as designated by the UN Security Council in Syria and underscored the success of their collective efforts in the fight against international terrorism.”

The statement said that Russia, Iran and Turkey will continue their cooperation in order to eliminate in Syria the terrorist organizations Islamic State and Al-Qaeda (outlawed in Russia) and the groups associated with them.  The leaders are confident that there is no military solution to the Syrian conflict.

“The presidents expressed their conviction that there could be no military solution to the Syrian conflict and that the conflict could be ended only through a negotiated political process,” the statement reads.

Putin, Erdogan and Rouhani “emphasized their strong and continued commitment to the sovereignty, independence, unity, territorial integrity and non-sectarian character of Syria.

Without naming US, the three leaders highlighted that none of the actions, no matter by whom they were undertaken, should undermine these principles, confirmed by relevant UN resolutions and by the will of the representatives of all segments of the Syrian society.

Read More: Russia criticise US for not acting against Syrian terror groups

The presidents have reaffirmed their determination to continue active cooperation on Syria.  “The Presidents reaffirmed their determination to continue their active cooperation on Syria for the achievement of lasting ceasefire between the conflicting parties and advancement of the political process envisaged by the UN Security Council Resolution 2254,” the statement reads.

Tass further said, Vladimir Putin, Recep Tayyip Erdogan and Hassan Rouhani also “expressed their conviction that the Syrian National Dialogue Congress, which was convened in Sochi on 30 January 2018, constituted an important milestone in paving the way for the political process, reiterated their commitment to follow up on the results of the Congress, reflecting the will of representatives of all segments of the Syrian society.

They reaffirmed their support to facilitate the beginning of the Committee’s work in Geneva as soon as possible with the assistance of the United Nations Secretary-General’s Special Envoy for Syria and in coordination with three guarantor states.”

It was agreed that the Astana format is the only effective international initiative that had helped reduce violence across Syria, according to the statement.

“Expressed their satisfaction with the outcomes of the first year of the Astana meetings held since January 2017, underlined that the Astana format had been the only effective international initiative that had helped reduce violence across Syria and had contributed to peace and stability in Syria, giving impetus to the Geneva process in order to find a lasting political solution to the Syrian conflict,” says the statement.

Russia and Iran have been supporting Syrian government headed by President Bashar al-Assad in its fight against Daesh and other terrorists in the country. Turky has entered its forces in Afrin without Damascus consent, presumably, to fight against Kurdish separatists, who were supporting of Kurdish fighters in Turkey.