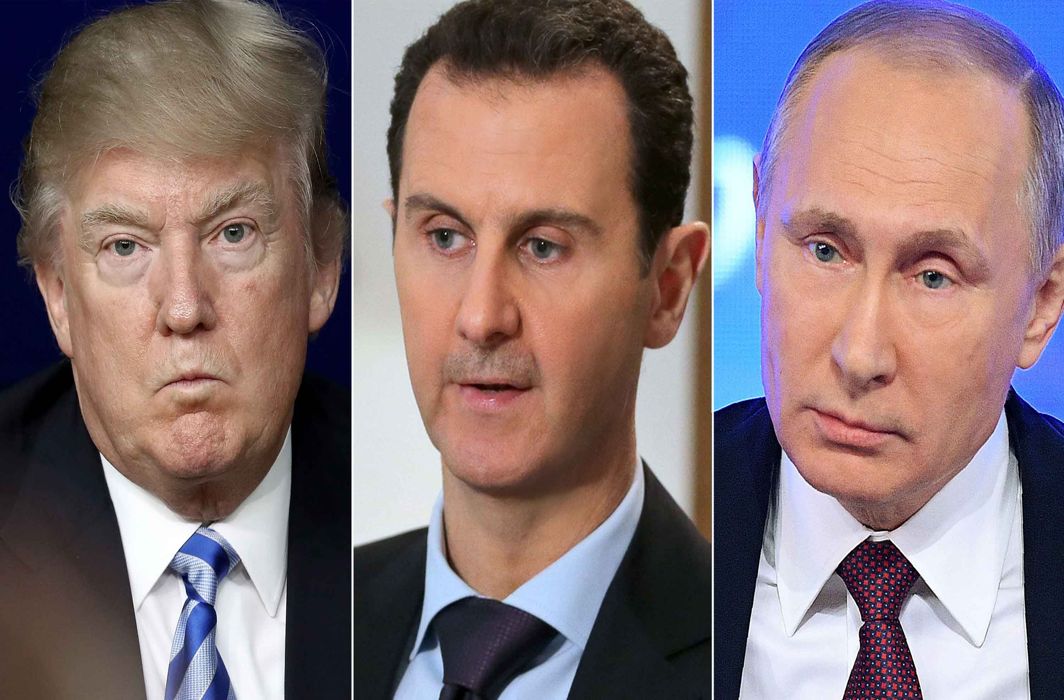 The ongoing attacks in Eastern Ghouta in the outskirts of Damascus have become a matter of conflict between the two perceptions carried by US and Russia about the inhabitants.

The Syrian army and Russians seem not to be willing to implement the recently concluded UNSC resolution for a 30-day ceasefire to avoid escape of the holed up “terrorists” while western media and even United Nations have been calling the situation as “Hell on Earth” for the besieged civilians.

UN Secretary General Antonio Guterres, while speaking at the UN Human Rights Council in Geneva on Monday described Eastern Ghouta situation as “Hell on Earth” and called for an immediate implementation of the Saturday’s Security Council resolution for a 30-day ceasefire in Syria.

“I remind all parties of their absolute obligation and international humanitarian and human rights law to protect civilians and civilian infrastructure at all times. Similarly, efforts to combat ‘terrorism’ do not supersede these obligations,” he added.

Meanwhile, TASS reports that Russian President Vladimir Putin has ordered a daily five-hour humanitarian pause in hostilities in a bid to prevent civilian casualties. It said that a humanitarian corridor would be opened from 9 a.m. to 2 p.m. every day from Tuesday to allow civilians to leave.

Latest reports received from Eastern Ghouta have confirmed that the five-hour “humanitarian pause” called by Russia has come into effect to allow civilians to evacuate the area that has been under continuous aerial bombardment. More than 550 civilians have reportedly lost their lives during last eight days.

The UN Secretary General’s remarks came at a time when doctors in the besieged enclave have accused Syrian government of launching a chlorine gas attack in Al-Shifaniyah in Eastern Ghouta.

Syria’s Civil Defence rescue team, also known as the White Helmets has claimed death of one child as a result of suffocation, while opposition health officials have claimed of victims showing symptoms “consistent with exposure to toxic chlorine gas.”

Interestingly, Russian Reconciliation Centre for Syria, a Latakia based joint Turkish-Russian enterprise, while releasing its report on Sunday, warned that “militants in Eastern Ghouta were preparing to launch a chemical attack which would later be blamed on Syrian government.”

The centre’s report said, “The data at our disposal indicates the leaders of militant units are preparing a provocation that will involve the utilization of chemical weapons in order to accuse the government forces of deploying chemical weapons against peaceful civilians.”

Recently the Russian embassy in Washington said in a statement, “We hope that the United States was not guided by the need to stop counterterrorism operations against the Islamic State, Jabhat al-Nusra, Ahrar al-Sham, the Army of Islam and Faylaq al-Rahman groups (outlawed in Russia ) operating in the suburbs of Damascus”.

It further said, “However, there are some doubts on that score. Sources ‘on the ground’ cited by Americans more and more often indicate that the information on the situation in Syria received by them comes from the White Helmets NGO, which is mixed in with terrorists and which is financed by Western proponents of the concept of forcible change of unwanted regimes.”

Moreover Russia’s Defence Minister Sergei Shoigu, while speaking at one of his official meeting in Moscow,  has also proposed  setting up of humanitarian corridors in the al-Tanf and Rukban areas for civilians’s free exit.

He said, “Being aware that Eastern Ghouta is not the sole trouble spot on the territory of Syria with regard to civilians and refugees, we know that the Rukban refugee camp controlled by the US is located in al-Tanf. We propose organizing the same humanitarian corridors and humanitarian pauses in the al Tanf and Rukban areas as well so that civilians can freely return to their homes and start restoring peaceful life,”

US forces are based in northern Syria without UN mandate of Syrian government’s invitation. Turkish forces are bent upon hitting Syrian Kurdish militants who have been receiving support from US forces. However, al-Tanf and Rukban are situated near Syria-Jordan border, in the south-eastern region of the country.