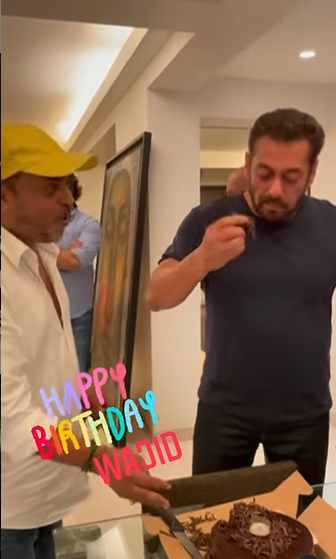 Actor Salman Khan on Friday celebrated the late singer, music composer Wajid Khan’s birthday by cutting the cake. The superstar was accompanied by his brother Sajid Khan and his rumoured girlfriend Lulia Vantur, who is a popular Romanian actor and singer.

Wajid’s brother Sajid shared a video of himself with Dabangg actor during the cake cutting session on his official Instagram handle. Sajid also put an emotional note under his post for his late brother, he wrote Kaise bataye kisko sunaye kitna tumhe hum chahte hai (How to tell, whom to tell how much we want you). Wajid also expresses his love towards his late brother by putting a heart emoji.

This is not the first time Tiger Zinda Hai actor celebrated Wajid Khan’s birthday. Last year during the COVID-19 pandemic, Salman Khan and his brother Sohail Khan cut the cake for Wajid khan on his birthday. The gesture clearly shows that the Kick actor shared a brotherhood bond with the late singer and always misses him on his birthdays.

Recently, Salman congratulated Sajid Khan on his new song called Mast Barsaat from his official Twitter handle. Under the tweet, he also said Wajid will always be missed.

Songwriter, music composer Wajid Khan died on July 1 this year at the age of 42 due to cardiac arrest. The singer also reportedly tested positive for COVID-19 due to which his health deteriorated. He is survived by his wife, Kamalrukh, and two children, a daughter and a son.

Both Sajid-Wajid started their career in Bollywood with Salman’s movie Pyaar Kiya Toh Darna Kya in 1998. Since then, both of them together gave many hit songs for Salman Khan such as do you wanna partner, Soni de Nakhre, Hud Hud Dabangg, Tujhe Aksa Beach, Jalwa, Munni badnaam hui and whatnot.