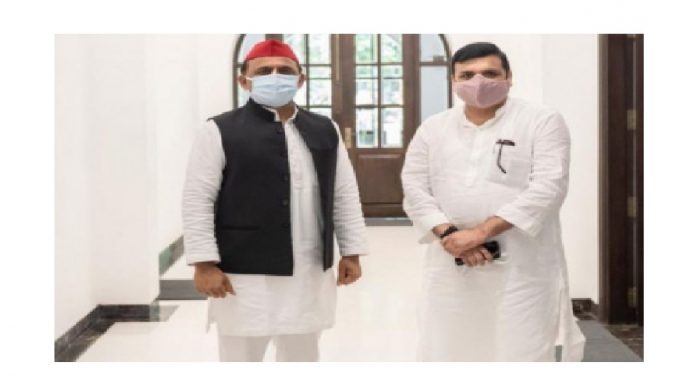 The Aam Aadmi Party, which claims to have been founded on anti-corruption principles drawing from the Anna Hazare campaign, is examining a proposal to ally with the Samajwadi Party for the Uttar Pradesh elections 2022. The AAP had ridiculed SP and other regional parties with the iconic comment by convener Arvind Kejriwal saying, “Sab mile hue hai.” Now, the AAP seems to be set on milan with one of those very parties.

Ahead of the 2022 election, Samajwadi Party is looking to form a super alliance so that they can come into power and give defeat to BJP. On Wednesday, November 24, AAP leader Sanjay Singh met with Samajwadi Party supremo and former Chief Minister Akhilesh Yadav to discuss the common issue to free Uttar Pradesh from BJP.

After the meeting, Sanjay Singh said that if the talks regarding the alliance are decided then the information will be given. He further said that there have been no talks about seat sharing, yet.

The meeting between Akhilesh Yadav and Sanjay Singh took place at the Lohia trust office in Lucknow. According to reports, the meeting took place for about an hour.

According to reports, Sanjay Singh had a positive discussion with Akhilesh Yadav. And, if reports had to be believed, then the seat-sharing talks between AAP and SP are in the final stages. which makes it clear that soon there will be SP+AAP= SAAP.

Currently, AAP is busy campaigning in Punjab and Uttarakhand for the 2022 elections. Delhi Chief Minister Arvind Kejriwal while addressing a public gathering in Moga, Punjab, said that he will give Rs 100, to 18+ women in Punjab, if his government comes to power in the state. He also promised that there will be round-the-clock electricity supply and free treatment at government-run hospitals in Punjab.