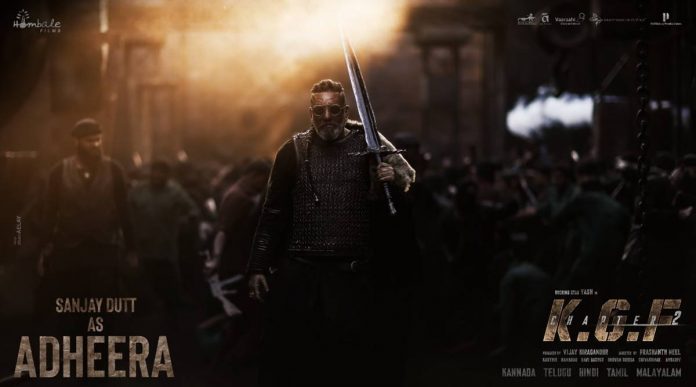 On the occasion of Sanjay Dutt’s birthday, the makers of the upcoming film KGF: Chapter 2 have released a new poster introducing Dutt as Adheera. The new poster of the film was released on Thursday to honor Sanjay Dutt and mark his birthday celebrations. Sharing the poster on their social media handles, Excel Entertainment wrote: War is meant for progress, even the vultures will agree with me” – #Adheera, Happy Birthday @duttsanjay

The 62-year-old actor also shared the poster on his Instagram account and thanked his fans for their birthday wishes. He wrote: Thank you so much everyone for all the warm birthday wishes. Working on #KGFChapter2 has been amazing. I know you all have been waiting for the film’s release for a long time and I assure you that it’ll be worth the wait! #Adheera

KGF: Chapter 2 is a sequel to the 2018 film K.G.F: Chapter 1. The film was scheduled to release on July 16 in four different languages– Telugu, Malayalam, Tamil, and Hindi. However, due to the massive second wave of the Covid-19 pandemic, the film couldn’t hit the silver screen as per the scheduled date. The film also stars Yash, Prakash Raj, and Raveena Tandon.

K.G.F: Chapter 2 is a period action film written and directed by Prashanth Neel, and produced by Vijay Kiragandur under the banner Hombale Films.

Dutt was last seen in Sadak 2 which is a sequel to the 1991 film Sadak. The film also marked the directorial comeback of Mahesh Bhatt that released on the OTT platform. He has a slew of projects lined up for release, including Shamshera, Prithviraj, Torbaaz, Bhuj: The Pride of India, and Shamshera.