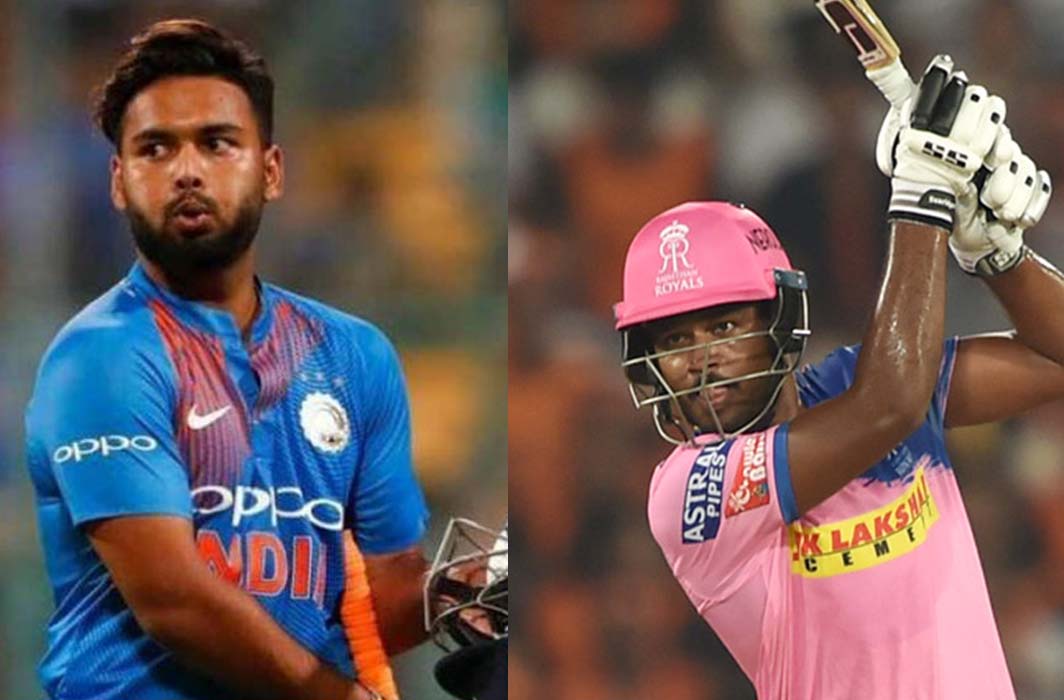 When Rishabh Pant made his first-class debut in October 2015, Sanju Samson had already stepped into the international arena, playing the T20 match against Zimbabwe the same year in July. Four and a half years down the lane, the 22-year-old Pant has played 11 tests, 15 ODIs and 28 T20Is, but not again has Samson managed to break into India’s playing eleven.

Samson’s performances on the other hand were not bad at all. He has two IPL centuries under his belt, and an overall average of 27.61 and a strike rate of 130.24 in the Indian Premier League. Mentored by Rahul Dravid, he has played many crucial knocks for Rajasthan Royals in the tournament.

The rumours before the World Cup 2019 was that MS Dhoni would retire from international cricket after the tournament. The selectors also seemed keen to give more chances to youngsters than to the 38-year-old Dhoni.

Although the ex-Indian captain hasn’t announced his retirement, he hasn’t played a match after India’s World Cup semi-final loss against New Zealand in July 2019. He was also not part of any of the Indian squads announced after the World Cup.

What worked for Pant was the fact that he peaked at the right time. Considering his last two stupendous IPL seasons, the selectors hoped Pant to be the right person to take up India’s wicket-keeper mantle. The left-handed batsman used to instil fear in the opposition minds with his aggressive stroke making, something which Dhoni was also famous for. When Wriddhiman Saha took a break from cricket due to an injury, Pant also got a chance to play the longer format of the game in Indian jersey.

Being good was not enough for Samson.

But is Pant capable of carrying Dhoni’s legacy forward? The Delhi lad’s international stats belie his talent. He averages just 20.5 in T20Is from 28 matches. His ODI performances till date also have not been up to the mark – In 15 matches, he was able to cross the fifty run mark only once.  Although Pant averages over 44 in test matches, he was eventually replaced by Saha after a series of poor scores.

It is to be noted that Saha didn’t replace Pant straight away after coming back from injury. He was benched initially, but Pant’s struggles with the bat gave opportunity to the 35-year-old Saha to get back to the only format he plays for India.

And he grabbed it with both hands. Saha’s exceptional wicket keeping was a talking point in India’s recent test series against South Africa and Bangladesh. Although he averages much lower than Pant in tests, Kohli seems to trust his hands behind the stumps more than Pant.

Pant’s rash stroke making, which was earlier his prime weapon, eventually turned out to be a cause of concern. Some irresponsible shots in some matches made critics question his temperament. Adding to that the fact that he was supposed to be the replacement of Dhoni – someone who rarely makes a careless move – pressure kept mounting on Pant.

He was stuck in no man’s land – whether to continue playing his natural game that gave him the repute he has or to get back into his shell and play more meticulous inningses. Low confidence led to his downfall – his clean bat-swing went missing, while wicket keeping became an area for mocking.

The crowd chanting “Dhoni.. Dhoni” whenever he missed a chance behind the stumps was the evidence the public wasn’t happy with the long run given to Pant, despite his poor performances.

Can Samson break in?

Samson hasn’t got many chances in the Indian colours, but he is definitely breathing down the neck of Pant. In the Vijay Hazare trophy last year, the Kerala wicket-keeper batsman smashed an unbeaten 212 against Goa in just 129 deliveries, becoming the sixth Indian to hit a List A double-century.

Samson’s sound technique and ability to pierce gaps and hit big shots had been on display on multiple occasions in the IPL. However, despite his performances, he hasn’t got many opportunities. He was part of the squad against West Indies but didn’t get a game. He is also part of the team for T20Is against Sri Lanka – with one match to go in the series, it seems unlikely that he will be getting a chance.

Pant has the backing of his Captain and the selectors. Many experts have come in support of Pant, asking the public to not put extra pressure on the young dashing batsman. BCCI president Sourav Ganguly recently said that “Pant is a special talent… and selection should be left to the selectors”.

Considering that Samson has not been included in the squad for the upcoming series against Australia, things look bleak for the Kerala lad. Selectors might be backing Pant to play the T20 World Cup, but it appears to be a tightrope walk now. Because if Pant fails to perform in upcoming series as well, Samson should be given adequate time to get used to playing in the high level games before becoming India’s first choice wicket keeper for this year’s World Cup. India shouldn’t be going to the tournament without a clarity on this front.