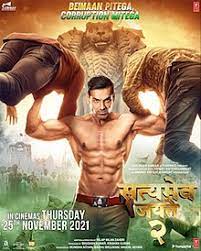 The much-awaited sequel of the 2018 hit Satyameva Jayate is all set to hit the theatres today on November 25, 2021. John Abraham starrer Satyameva Jayate 2 movie is a whole mood of action, drama and thriller. This movie is directed by Milap Zaveri.

Also, Divya Khosla Kumar is in the lead role of Satyameva Jayate 2. The movie is based on patriotism in which actor, John Abraham undergo a mission which fights againts bad politics, corruptions, injustice and misuse of power by many political characters in the movie.

Also, in the second thread he posted picture of his favourite scene from the movie Satyameva Jayate 2, where he ranked the movie. The user rated this movie, in which he has given 3 stars out of 5.

Check out the reaction:

Moreover, the other tweeple commented that three John Abraham’s get crammed into this terrible migraine packed masala movie. Also, he added that, the only good thing about the movie, Satyameva Jayate 2 is Nora Fatehi’s belly dance.

According to the bollywood reports, Zaveri has replicated antiquated themes from the 1980s, such as physicians on strike, children dying from food poisoning and a lack of oxygen, a flyover collapsing, and a girl setting herself on fire after being raped by a politician’s son.