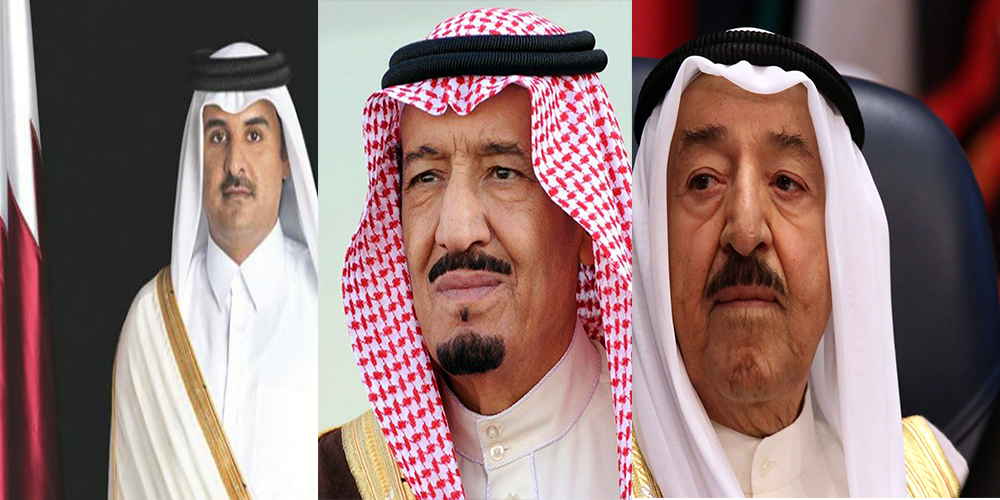 The US supported Kuwait’s mediation for resolving crisis between Saudi Arabia plus three allies and Qatar seems to be working. On Kuwait’s Emir Sheikh Sabah al-Sabah’s request, Saudi Arabia, UAE, Bahrain and Egypt, on Sunday morning, agreed to extend their 10 day ultimatum by another 48 hours. The ultimatum expired Sunday midnight.

The foreign ministers of Saudi Arabia-led group of four countries will review Qatar’s response in a meeting scheduled to be held in Cairo on Wednesday. Egypt’s Foreign Ministry spokesman Ahmed Abu Zeid, was quoted as saying, “At the invitation of  foreign Minister Sameh Shoukry, there will be a quartet meeting of the foreign ministers of Egypt, Saudi Arabia, the UAE and Bahrain in Cairo on Wednesday July 5 to follow up on the developing situation regarding relations with Qatar.”

Saudi Arabia and its allies severed diplomatic ties with Qatar on June 5, sparking worst diplomatic crisis in decades. Qatari citizens were ordered to leave these countries and various steps were taken against Qatari companies and financial institutions. All land and air links were also severed.

Meanwhile Qatar’s Foreign Minister Sheikh Mohammed bin Abdulrahman Al-Thani, while speaking to journalist on Saturday in Rome said, “The list of demands is made to be rejected. The state of Qatar …is rejecting it as a principle. We are willing to engage in providing the proper conditions for further dialogue.”

Meanwhile QNA, the official Qatari News Agency, has reported that Foreign Minister will inform the ruler of Kuwait of Qatar’s response on Monday.

However, the US administration headed by Donald Trump, who initially justified Saudi led bloc action against Qatar, has been giving varying responses. A Department of State official said on Sunday that US encourages “all parties to exercise restraint to allow for productive diplomatic discussions. We are not going to get ahead of those discussions. We fully support Kuwait mediation”.

Earlier this week, Secretary of State Rex Tillerson insisted that Qatar’s neighbors provide a list of demands that was “reasonable and actionable”. He had also called for compromise and hosted senior Gulf officials, but efforts were undermined by President Trump who apparently supported Riyadh’s position.

Saudi Arabia had demanded Qatar to shut down Al Jazeera network, close Turkish military base and scale down ties with Iran. Qatar was also asked to cut ties with Muslim Brotherhood and other groups including Hezbollah, al-Qaeda and IS.

The Saudi Arabia led block also asked Qatar to stop all means of funding for individuals, groups or organizations that have been designated as terrorists by Saudi Arabia, UAE, Egypt, Bahrain, US and other countries.

Qatar must also refuse to naturalize citizens from the four countries and “revoke Qatari citizenship for existing nationals where such citizenship violates those countries’ laws”. Qatar should also hand over “terrorist figures”, fugitives and wanted individuals from Saudi Arabia led bloc to their countries of origin, freeze their assets and provide any desired information about their residency, movements and finances. They also asked Qatar to cease contact with the political opposition in these countries.

Demand of severing ties with Iran was explained in detail. Doha was asked to shut down  its diplomatic posts in Iran, expel any members of Iran’s Revolutionary Guards and conduct trade and commerce in accordance with the US and international sanctions in manner that does not “jeopardize the security” of the GCC member countries.

The desired media clampdown was not targeted at Al-Jazeera only. Al Jazeera’s affiliates and other news outlets including Arabi21, Rassd, Al-Araby Al-Jadeed and Middle East Eye were also asked to be close down.

Doha was also asked to “align Qatar’s military, political, social and economic policies with other Gulf and Arab countries, as well as on economic matters, as per 2014 agreement reached with Saudi Arabia”.

Another demand, which could have been quite costly for Qatar, says to “pay reparations and compensation for loss of lives and other financial losses caused by Qatar’s policies in the recent years. The sum will be determined in coordination with Qatar”.

They asked Qatar to agree to all demands within ten days of list being submitted, or the list will become invalid. Qatar must consent to monthly compliance audits in the first year after agreeing, followed by quarterly audits in the second year and annual audits in the following ten years.

The situation may deteriorate in case of Qatar’s non-compliance. UAE Ambassador to Russia Omar Ghobash, during an interview last week said that Qatar could face fresh sanctions by Gulf States asking their trading partners to choose between them or with Doha. Commercial bankers in the region believe that Saudi, Emirati and Bahraini banks might receive official guidance to pull deposits and interbank loans from Qatar.

However UAE’s Minister of State for Foreign Affairs Anwar Gargash has played down the chances of escalation saying “the alternative is not escalation but parting ways” from the six-member GCC.

On the other hand Qatar’s Foreign Minister Sheikh Mohammad bin Abdulrahman Al-Thani , while speaking in Washington last week, said the GCC was set up to guard against external threats. “When the threat is coming from inside the GCC, there is a suspicion about the sustainability of the organization.”

Following the severing of diplomatic ties by Saudi led bloc and delinking ground and air routes with Qatar, Iran and Turkey have started supplying food items, water and other necessities and welcomed Qatar Airways to use their skies.

In one of his tweets, Saudi Arabia’s representative in UN Abdullah bin-Yahya al-Moallemi said: “Qatar had insisted on shaking the security of the kingdom of Saudi Arabia and interfering in the affairs of countries in the region.”

Saudi Arabian forces have been assisting Bahrain in controlling opposition protests demanding their basic rights. Riyadh is also heading a coalition with started war against Yemen, currently under Houthis control. Qatar was also alleged by Riyadh to have ties with Yemen’s Ansarullah, the militia force of the Houthis fighting against Saudi hegemonic war. The ousted President Mansour al-Hadi led government in exile is based in Riyadh for more than a year.

Kuwait, working for mediating in the crisis and Oman have not followed Saudi Arabia’s diktat for severing relations with Qatar. Among the GCC countries, Oman and Kuwait have better ties with Tehran than other GCC member countries. Diplomatic ties between Saudi Arabia and Iran were severed after violent protest at Saudi embassy in Tehran in the aftermath of stampede tragedy in Mina, during Haj 2015. Some 465 Iranians were among those killed out of more than 1400 casualties. However Saudi Arabia admitted the death of 769 only. Others remain missing till date. More than 100 Indians were killed while 280 remained missing.