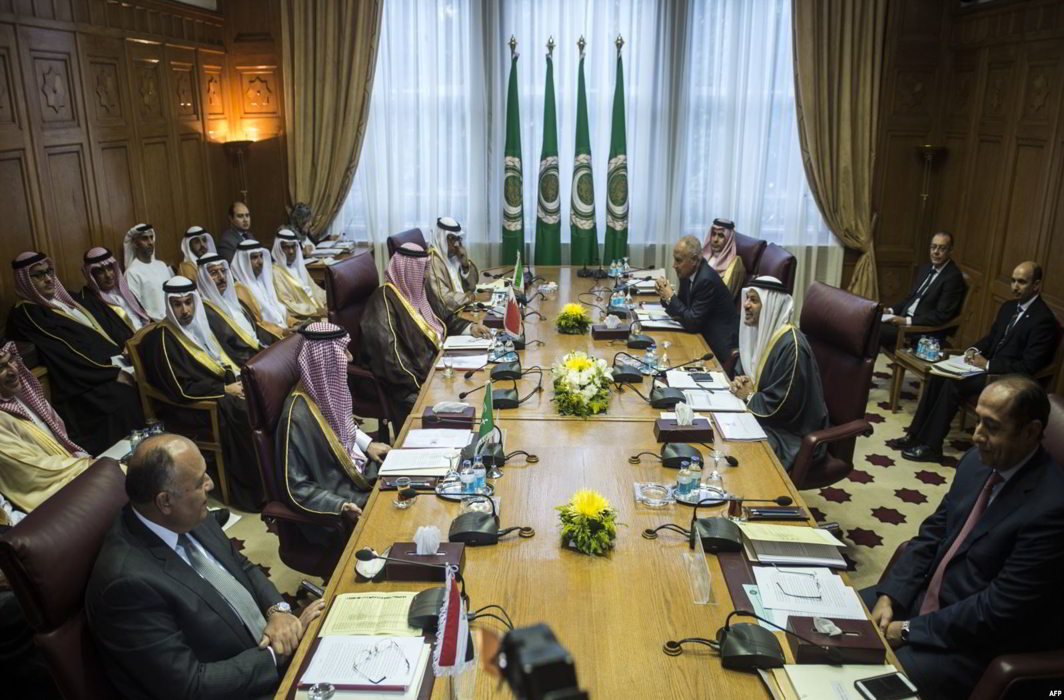 In a swift move Saudi Arabia has led Arab foreign ministers in condemning Iran and Lebanese group Hezballah at an extraordinary Arab League meeting held in Cairo on Sunday. The meeting was held at the behest of Saudi Arabia amid heightened tension with Iran over developments in Lebanon and ongoing war against Yemen.

The Arab foreign ministers’ meeting were also important with the recent resignation of Lebanese PM Saad Hariri in a surprise announcement made from Riyadh. He is currently cooling his heels in Paris, a journey connived by Saudi and French administrations. Hariri cited Iran and Hezballah for meddling in regional affairs and expressed fear of a plot to assassinate him.

Saudi Arabia’s Foreign Minister Adel Jubeir told the foreign ministers of the region that his country “will not stand by and will not hesitate to defend its security” in the face of Iranian “aggression.” He further said, “Any leniency in dealing with their policies would only encourage them more, so we must stand together,” Jubeir said, referring to Iran.

He alleged that Iran was aiming “to destabilise and fuel sectarian rift” on the region “and drive a wedge between ourselves and our people”.

He further said “”This swift response reflects the gravity of the situation our countries are facing … as a result of the ballistic missiles violations of Iran and the blunt interference in the domestic affairs of Arab countries.”

Earlier, Saudi Arabia alleged Iran for supplying long range missiles to Houthi Ansarallah in Yemen, who had recently conducted attack on Riyadh airport. Saudi authorities claimed of destroying the missile before reaching its destination while Houthis said that the missile hit the target successfully. Saudi Arabia called it an Iranian aggression against its territory.

During the meeting Bahrain’s Foreign Minister Sheikh Khalid bin Ahmed Al-Khalifa was quite vocal against Hezbollah saying it was “in total control” of Lebanon. He reportedly alleged that “Iran’s biggest arm in the region at the moment is the terrorist [Hizballah] arm.”

While addressing the Arab foreign ministers Arab League Secretary General Ahmed Aboul Gheit said that they will raise the matter with UN Security Council and other international organizations. He alleged, “Iranian threats have gone beyond all limits and pushed the region into a dangerous abyss.”

He even went on saying that missile which was fired by Houthis towards Riyadh was “Iranian made” and called is as an “unacceptable Iranian message”.

However, the Egyptian diplomat said that Arab League was “not declaring war on Iran at this stage.” He  said that Arab League  was not asking the Security Council to meet, but  they were “just briefing the council and maybe the next stage would be for us to meet and call for a Security Council meeting and submit a draft Arab resolution [against Iran].”

AFP reports that Saudi Arabia requested for Arab League foreign ministers’ meeting to discuss “the violations committed by Iran in the Arab region, which undermines security and peace … around the globe.”

The Arab League accused Hezballah of “supporting terrorism and extremist groups in Arab countries with advanced weapons and ballistic missiles,” in its declaration.  It said Arab nations will provide details to the SC of Tehran’s violations for arming Houthi rebels in Yemen. The declaration called Hezbollah as “terrorist organisation”.

Earlier in the day, Iran’s foreign Minister Javad Zarif told state media in Antalya, a Turkish resort city, on the sidelines of a meeting with his Russian and Trukish counterparts, “Unfortunately countries like the Saudi regime are pursuing divisions and creating differences and because of this they don’t see any results other than divisions.” The trilateral foreign ministers meeting was discussing the issues related to Syrian situation.

Saudi Arabia allege Iran of instigating and supporting Yemen’s Houthis and opposition groups in Bahrain where Saudi forces were “helping” Al-Khalifa regime to crush the “protesters” and even denying them right to practice their religion. Majority Shias were denied to organise religious meetings commemorating the martyrdom of Imam Hussein in the month of Muharram recently.

According to Riyadh’s official  Al-Arabia.net, in a separate meeting with editors of Egyptian newspapers, the Saudi Arabia’s foreign minister Adel al-Jubeir said that Qatar’s crisis is small matter and and there are more important matters to attend to. Observers believe that he tried to belittle the gulf crisis triggered after Saudi led quartet cut ties with Qatar earlier in June.

Some of the threats he mentioned include the Iranian threat to Arab national security, the fight against terrorism, the Syrian crisis, Libya, yemen’s stability, internal development and implementation of Crown Prince Mohammed bin Salman vision 2030 in Saudi Arabia.

The Cairo meeting was not attended by Lebanese foreign minister Gerban Basil. Instead Antoine Azzam, country’s representative to the Arab League participated in the foreign ministers’ meeting.

Hezballah is part of the coalition government in Lebanese government. PM Saad Hariri, a Sunni leader belongs to Future Movement. President Michel Aoun, has refused to accept Hariri’s resignation and accused Saudi Arabia of holding him against his will. Hariri and Saudi Arabia deny the allegations.

Recently BBC has carried an investigation on how US and its allies shifted Daesh terrorists from Raqqa, Syria and the way they didn’t allow Russia to bomb the fleeing terrorists from Raqqa. US weapons drop to terrorists was also caught in camera in Iraq. Israel had also admitted providing medical support to the “civilians” injured in Syria. Syria and Iraq have been alleging these countries for their hand-in-glove role in spreading terrorism in the region.

According to Marwan Bishara, a senior political analyst has said that Saudi Arabia had convened the Cairo meeting in a bid to “consolidate its position in a divided Arab region.”

He further says, “The Arab world is divided and a lot of countries convened to Cairo today don’t see eye to eye with Saudi Arabia on its ways and means or how it plans to confront Iran in the region.”

“That doesn’t mean they agree to the escalation of Iranian interference in various Arab countries, but paradoxically it was the incompetence and the division among those Arab countries that was the main factor why Iran is able to expand its influence in the region,” added Bishara.