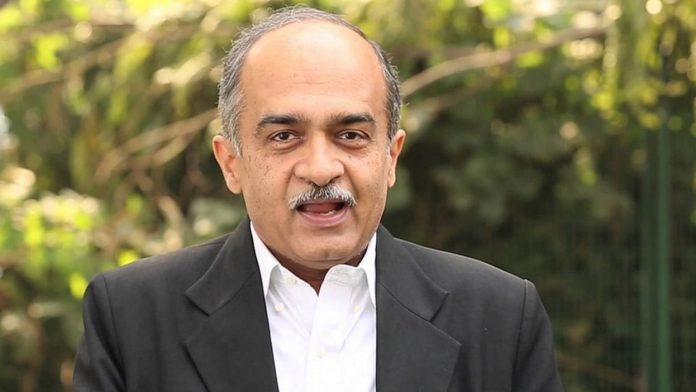 The Supreme Court has found Advocate Prashant Bhushan guilty of contempt of court for his tweets criticising Chief Justice of India SA Bobde and the judiciary posted earlier this year.

The order was passed today by a Bench of Justices Arun Mishra, BR Gavai, and Krishna Murari. The Court is yet to decide on the quantum of punishment. The hearing on the sentence will be held on August 20. The Court had registered the suo motu contempt case against Bhushan over two of his tweets criticising the judiciary.

Orders were reserved in the matter on August 5 after a day’s hearing, in which Senior Advocate Dushyant Dave made vociferous submissions on behalf of Bhushan.  The two tweets in question were posted in June this year.

Dave submitted that Bhushan was airing only bona fide criticism against the judiciary without any malice. Dave also submitted that there were several shortcomings in the functioning of the judiciary, which warranted Bhushan’s criticism. Bhushan filed a detailed reply affidavit to the contempt notice, stating that expression of bona fide opinion about the Court cannot amount to contempt.

The first tweet pertained to Bhushan’s commentary on a picture of Chief Justice of India SA Bobde on a high-end motorcycle, whereas in the second, Bhushan expressed his opinion on the role of last four CJIs amid the state of affairs in the country. Madhya Pradesh-based advocate Mahek Maheshwari had also filed a contempt petition against Bhushan and Twitter India on July 2 over the tweet pertaining to CJI Bobde on a motorcycle.

In his reply to the Court by a 142-page affidavit, Bhushan stated that his tweets are justified, and could not be considered contempt of court.

He said that his tweet on CJI Bobde appearing in a picture on a motorcycle without a helmet or a mask was a mere expression of his anguish with an intention to highlight the incongruity of the situation. As far as the tweet on the role of the last four CJIs is concerned, Bhushan submitted that he was expressing his bona fide opinion about the state of affairs.

As regards his tweet about Chief Justice of India, S A Bobde, seated on a Harley Davidson motorcycle, Bhushan said in the affidavit that his comment was to underline his angusih at the non-physical functioning of the Supreme Court for the last more than three months, “as a result of which fundamental rights of citizens, such as those in detention, those destitute and poor, and others facing serious and urgent grievances were not being addressed or taken up for redressal“.

Along with the reply, Bhushan had also moved the Supreme Court challenging the action of its Secretary-General to list the contempt petition filed against him on the judicial side, without the consent of the Attorney General.

Moreover, this plea had also questioned the sudden listing of an 11-year-old contempt matter pending against Bhushan in light of recent developments. On August 10, the Court decided to hear this case on merits. This 2009 case concerns Bhushan’s statements on corruption in the judiciary in an interview with Tehelka magazine.