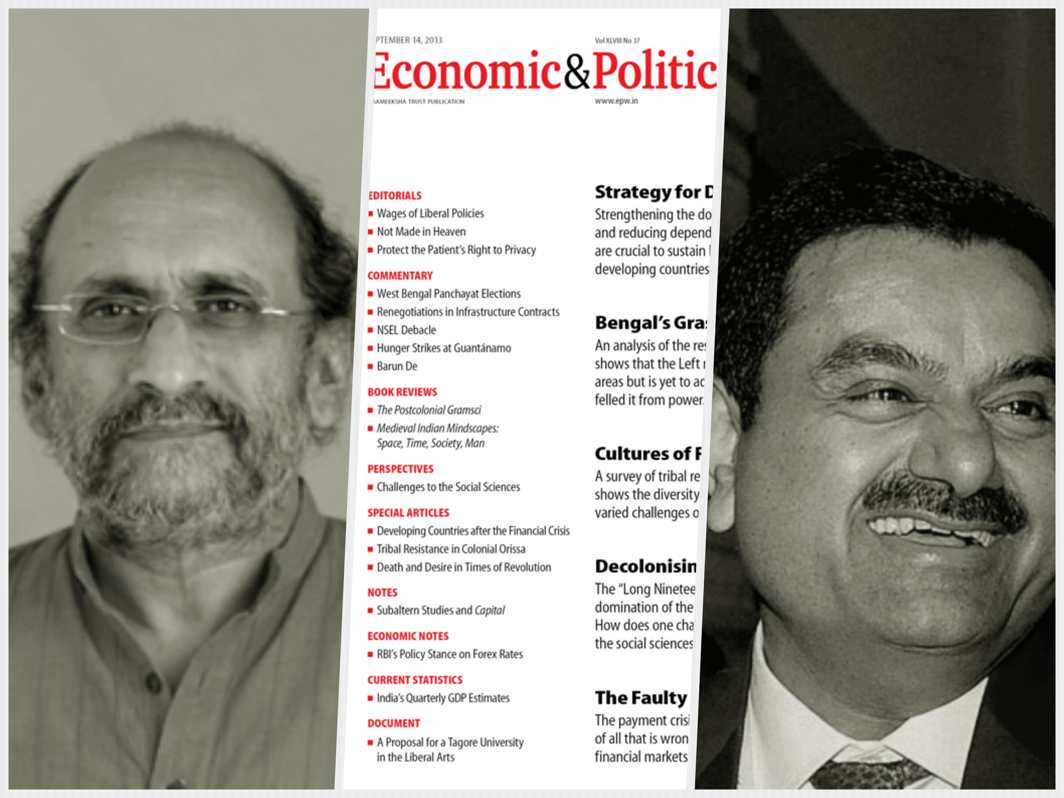 More than 150 members of the academic community and contributors to the EPW have written an open letter to the directors of Sameeksha Trust, which brings out the journal Economic and Political Weekly (EPW), questioning their decision to remove an article on the Adani Group from the EPW website and impose restrictions on the editor. They have asked the trustees to make an effort to engage with the larger community on recent events and restore the independent nature of the journal, questioning their decision to cow down to corporate pressure.

On July 18, Economic and Political Weekly (EPW) editor Paranjoy Guha Thakurta resigned from his position after directors of the Sameeksha Trust ordered that he take down an article on the Adani Group. The Adani Group had written to the board and Guha Thakurta saying that the article was defamatory and threatened to take them to court.

Guha Thakurta has said that, in addition to asking that the article be taken down, the board told him he could no longer publish articles with his by-line in the journal and would have to work with a co-editor in the future.

The board members, in their statement, have not denied this or questioned the factual nature of the original articles. They said instead that Guha Thakurta had “exceeded his brief” by responding to the Adani Group’s letter on his own and initiating legal process on behalf of the Sameeksha Trust “without informing, let alone obtaining approval of, the Trust”.

The Sameeksha Trust’s actions upset the wider community of scholars who have been part of the ‘EPW community’ as readers and writers. Their letter to Sameeksha Trust directors and the list of signatories is reproduced below:

Open letter to the board members of the Sameeksha Trust

As long-standing well-wishers and members of the intellectual community served by the EPW, we are appalled and dismayed by the recent events leading to the abrupt resignation of the editor, Paranjoy Guha Thakurta.

We are distressed that the board of the Sameeksha Trust has insisted that the editor retract an article published in the journal, and is preparing to introduce new norms for the board-editor relationship and appoint a co-editor. It is obvious that, taken together, these actions (mentioned by the editor in interviews to the press and not denied in the statement issued by the trust) would force any self-respecting editor to resign. By failing to distinguish between internal issues of procedural propriety in the board-editor relationship from the much larger question of the EPW’s public reputation for integrity, the board of the Sameeksha Trust has dealt a strong blow to the journal’s credibility.

Paranjoy Guha Thakurta’s professional reputation has been primarily that of an investigative journalist of several decades standing. His well-known past exposés have delved into the malpractices of large corporations and the frequent complicity of state institutions in such corrupt practices. That such journalism could provoke retaliation by those investigated may be expected. These facts must have been known to the board of trustees of the Sameeksha Trust when they appointed Guha Thakurta as editor just 15 months earlier. It is one thing to wonder if the editor may have erred in initiating legal action on behalf of the Trust without first consulting its board, and quite another to withdraw an already published article from the journal. If the board believes the article to be mistaken in its facts, it must issue a public apology and retraction.  If it is only concerned that due deference was not shown to the board, it must publicly stand by the article. By forcing the editor’s resignation without clarifying its stand on the substance of the article, the board has diminished the institution that it is mandated to nurture.

The fact that a legal notice was sent to the editor and the publishers (Sameeksha Trust) of EPW, for an ongoing investigation on the tweaking of rules that have benefited the Adani Group, is not surprising. Legal notices have unfortunately become the standard means used to intimidate and suppress investigative journalism. When they translate into court cases that can extend over years, they obviously add to costs and further harassment of honest journalists. However, as long as all the published material can be adequately substantiated and verified, there is little reason to fear an adverse result from the judicial process. But publishers MUST stand behind and back their editors on this if the journals are to maintain their independence and credibility.

India is currently living through a dark period in which there are real concerns about freedom and independence of intellectual expression, both for academics and journalists, with significant corporate takeover of major media houses and increasing instances of overt and covert intimidation of independent thinking and debate. In this context, reports of what appears to be a capitulation by the board of trustees of Sameeksha Trust –  removing the “offending” article from the EPW website and trying to impose humiliating terms on the editor – are alarming. The EPW has a long and distinguished tradition of promoting independent and critical thinking that is vital in a democracy. We expect the current trustees to be mindful of our inherited legacy that they hold in trust on behalf of us as scholars, analysts and activists in India and abroad, who have contributed to EPW over long decades. They need to take immediate steps to restore the prestige and credibility of the journal and the Sameeksha Trust. This letter is therefore also asking the Trust, which (regardless of its purely legal status) is in the nature of a body accountable to a larger public, to create channels of communication between the Trust and the EPW community so as to strengthen the autonomy and integrity of EPW.