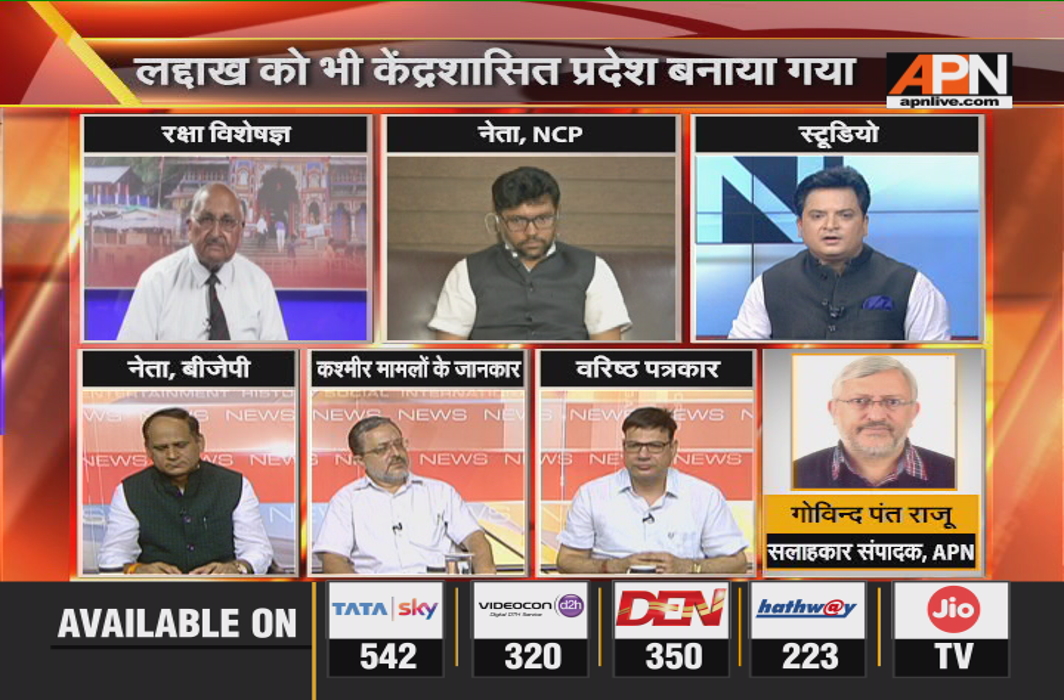 Badhwar said: “This is an interim decision. Two Lt Governors will be appointed for Ladakh and Kashmir. The move will be considered good or bad depending upon the outcome. It was part of the BJP manifesto. Leaders like SP Mukherjee and Deen Dayal Upadhyay wanted it, Advaniji also wanted it, though Vajpayeeji never came out with a bold stand on this. Let’s not get too excited about it, nor should we be too hasty in flaying the move. I have covered the Valley, and am aware of the ground realities there. This issue concerns the fundaments of the Indian constitution.”

Kaushik said: “People gave the BJP a huge mandate. It was time to re-asses and re-examine Articles 370 and 35A. People in the Valley wanted it, barring 5-10 percent people. I came from a taxi to this studio…the cab driver gave me mithai as soon as he came to know that Art 370 had been scrapped. The government should be able to handle the situation now. Security has been beefed up in the Valley.”

Brig Behl said: “This is a historic move and should have happened much earlier. The Valley has not seen the kind of development that was expected. This is a moment of joy for the nation.”

Mishra said: “This is a very bold move on the part of the government. In the past, I would feel that I am from out of the country on visiting the Valley. Mehbooba Mufti and others are practising politics of division. Muft’s turf has been taken away.”

Singh: “People wanted it. It was part of our poll manifesto. PDP leaders are tearing their shirts, now janta will also tear their shirts. After 1947, it looks like this is the second independence for the nation, and for the first time in the valley. It is an auspicious day for the Valley.”

Raju said: “If opposition leaders want debate in parliament, that demand is legit. Even the government should not have a problem with that. This is a big move. The government seems to have manoeuvred to have its way. No doubt, this decision should have been taken long time back. This special status for Kashmir has been the bone of contention for long. The government has shown that it can take daring steps, but it needs to be seen if this can solve the problems in Kashmir. This move was not expected by Pakistan as well. Imran Khan recently stated that Pak will be giving support to Kashmiris. International repercussions are also likely, though this is an internal matter of the country.”

Singh said: “The government is fully aware of the international repercussions, but it is an internal matter of the country. This government has taken this move with a strong determination.”

Manvati said: “For the common man, this is a welcome move. When Sheikh Abdullah came the second time, he had met industrialists over three days, but they said rail head is in Jammu and so industries will be set up in Jammu. Sheikh said industries should be set up in Kashmir, but how could they (industrialists) have done that? With the result, barring one industry in the Valley, there is not much else. Now there will be a boost to both tourism and industry.”

Kaushik said: “It is not that Art 370 was a historical blunder. But when we assess the decision, we need to see what advantage was gained from it?”

Brig Behl said: “The people in the Valley would feel stifled. There is no need to feel panic-stricken about the move.”

Mishra said: “Nehru would know why he took the decision, but in today’s time, it needed to be scrapped.  When a bold decision is taken, there are pros and cons, but bold decisions have to be taken at some point. I have no idea why the Congress is opposing the move, because Nehru had said that Art 370 should be removed. Similarly, reservation bill was never proposed to be there forever.”

Manvati said: “This came two years after the Instruments of Accession was signed. It is a falsity to believe that Art 370 and Instrument of Accession came at the same time. This is politics, and it is not that National Conference (NC) or People’s Democratic Party (PDP) leaders do not know all this. Aam janta will be happy.”

Singh said: “BJP leaders have very well dissected this problem before going in for this kind of operation; if psychoanalysis is needed, that too will be done. SP Mukherjee always wanted this, how can we have two constitutions in the same country.”

Raju said: “Lot of parties have supported the move. JDU has its own compulsions, and wants to stand out, but the real mudda is different. I feel it’s a big move, but not that this is going to simplify matters now. There is no need for MPs to tear clothes over this.”

Kaushik said: “No one expected this to happen like this, that’s why some MPs started tearing clothes and making strong statements.”