Home Opinion & analysis Selling pakodas as a form of employment is an idea showing simplicity... 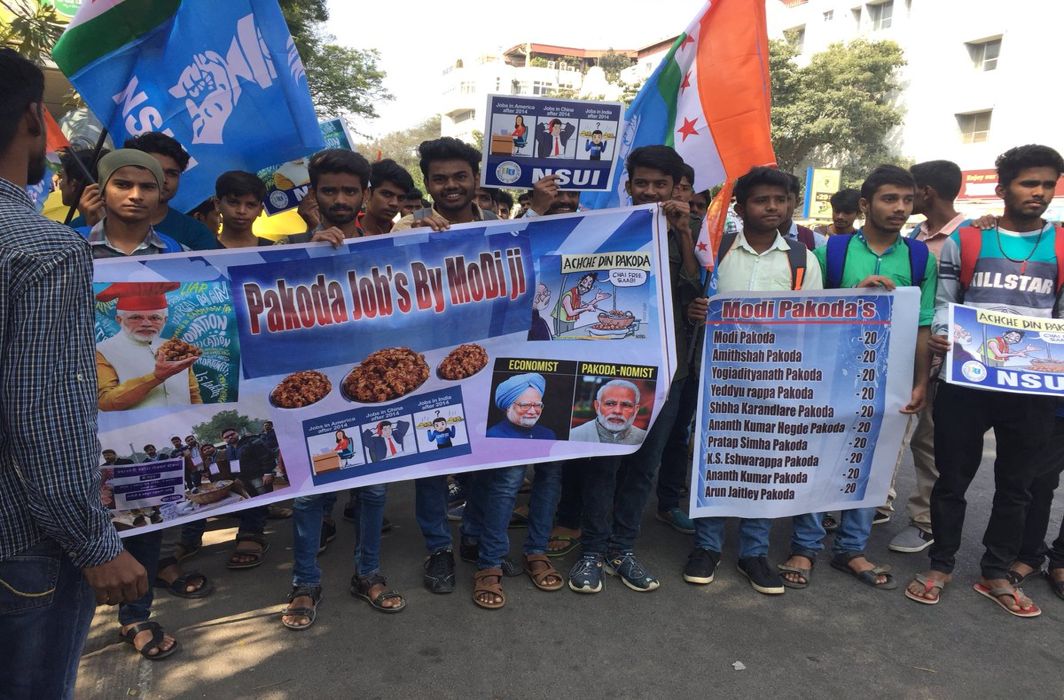 You can’t have your pakoda and eat it too. You cannot say it is a good thing but others cannot have it.

Prime Minister Narendra Modi had said in an interview to a news channel recently: “If someone opens a ‘pakoda’ shop in front of your office, does that not count as employment? The person’s daily earning of Rs200 will never come into any books or accounts. The truth is massive number of people are being employed.”

The statement created a stir. What a solution to the problem of unemployment that almost every expert, including – and especially – the Harvard and Oxford-educated economists had termed as intractable. It was the simplicity of genius. But it seems the country just isn’t fully ready for this revolutionary idea.

Congress leader Sanjay Nirupam was detained by police when he was on his way to sell pakodas outside Mantralaya – as if it was a crime. Even if it was – which it isn’t, ask the PM – the police acted even before it was committed. Something like police rounding up some men from some park/building claiming they were planning a dacoity.

Students selling pakodas near the venue for PM’s rally were arrested. In Uttar Pradesh, where Yogi Adityanath does not take kindly to anything ‘unpalatable’ to him, found the job of Samajwadi Party and Congress workers, and some students selling pakodas an offence serious enough to let the police thrash them for it.

Contrast this with Delhi BJP chief Manoj Tiwari’s plans to have pakoda parties in different parts of the city. The BJP or its leaders, including the PM, do not seem to have any problems with this. Nor, apparently, has Delhi Police, which reports to the Union Home Ministry.

What do Tiwari’s pakodas have that others don’t? Why this kind of pakoda discrimination? Was the guy selling pakodas outside Zee TV office, whom the PM mentioned as a shining example of employment opportunities provided by his government, also from BJP?

The government has to answer. The Nation wants to know. It was an avenue of employment hailed by the top honcho himself, and he surely did not mean to say it was intended only for BJP workers – unless the BJP has secret, sinister plans to corner all pakoda outlets, lure citizens to its fold by offering them exclusive pakoda vending rights  and declare all non-BJP pakoda sellers anti-nationals who should be packed off to Packistan, which is what Pakistan is meant for in the minds of ‘patritotic’ Hindutvaites who want India to belong only to them.

In fact, one of their leading lights, minister of state in Modi government Giriraj Singh, is said to have captured some 2.5 acres of this country’s land in Bihar, as part of this nationalist drive, no doubt. Since the Bihar government is headed by a person who is still not fully nationalist and patriotic like BJP, a case has been registered against Giriraj Singh.

Not only this, apart from booking the minister for his nationalist act, another anti-national lodged a complaint in the court of chief judicial magistrate (CJM) in Muzaffarpur against BJP national president and Rajya Sabha MP Amit Shah for saying that selling pakodas was no shame, reported India Today. The petitioner’s argument was that the BJP president encouraging educated unemployed youths to sell pakodas was like making a mockery of their condition.

On the contrary, it is the petitioner who seems to be making a mockery of the national pastime of protesting for hurt sentiments. In New India, only nationalist sentiments can be deemed to be hurt, and no nationalist can hurt sentiments. That is India’s glorious tradition. A nationalist mob can disrupt a Republic Day function and ask for one of them killed in this patriotic act to be declared a martyr and his family compensated liberally. Just see what happened in Kasganj, Uttar Pradesh.

Shah had only tried to explain to the country’s aspiring youth to look no further, rack their brains no further to find a way to a bright future. Just follow the path shown by the PM: sell pakodas. It was the simplicity of genius.

It was picked up by everyone, cutting across party lines, even though BJP’s own government in UP led by Yogi Adityanath did not take too kindly to it. Azam Khan, Samajwadi Party protested: “Students had set up a stall in Ambedkar park, but the police thrashed them. The prime minister must not treat it as a joke. He has given good advice and we welcome it. We are also passing it on to the unemployed youth so that they don’t sit at home idle. We had asked PM Modi for jobs,” said a media report.

The Samajwadi Party in Bareilly opened the ‘PM Pakoda Training Centre’ where the unemployed, educated youth are being trained to make pakodas. The students are taught to make four types of pakodas – Modi pakoda, Shah pakoda, Jaitley pakoda, and Yogi pakoda.

Youth Congress in Agra also set up a stall to sell pakodas on the roadside. Much like Bareilly, from GST Tadka pakodas to U-turn and Kala Dhan pakodas, were sold as snacks.

In Delhi, it is the BJP which is now coming up with a ‘Pakoda Party’. Delhi BJP chief, Mr Manoj Tiwari is the first from the party to take forward PM Narendra Modi’s appreciation of  pakodawalas.  If the ‘Pakoda Party’ clicks in Delhi, the BJP will take this across the country, said media reports.

Tiwari will hold the first ‘Pakoda Party’ at his Lok Sabha constituency (North-West Delhi) on February 12. The “pakodawalas” have been called to set up stalls at the  venue.

After this he would organise similar events in all 14 districts of Delhi. Taking the “pakoda” theme forward, Tiwari said the the pakoda meeting would be in the line of  “Modiji’s sabka sath, sabka vikas.” BJP leaders and functionaries attending the meeting “will bring these pakoda sellers to the forefront like the chaiwallahs,” Tiwari said.

This upsurge of support for the PM’s idea, so much in keeping with native wisdom, culture and cuisine, holds out the hope of emancipating crores of youth from unemployment and make India the largest and the fastest growing economy in the world.

As a columnist in The Hindu, G Sampath, wrote: “As per the 2016-17 NSSO data, a pakodawala makes an average of 300 pakodas a day. That’s 1,09,500 pakodas a year. Let’s assume he sells two pakodas per plate and each plate costs Rs20. That’s an annual turnover of 54,750 plates worth Rs10,95,000. Now, if every one of India’s 2 crore unemployed sets up a pakoda stall, that’s 2 crore pakoda stalls producing 2.1 trillion pakodas a year, generating revenue of Rs21 trillion. If taxed at 25%, that gives the government a cool Rs5.25 trillion, which is more than enough to provide food, healthcare, and 1-BHK dwellings with attached grazing area to every one of the 200 million cows in the country.”

PM Modi had it all worked out beforehand.