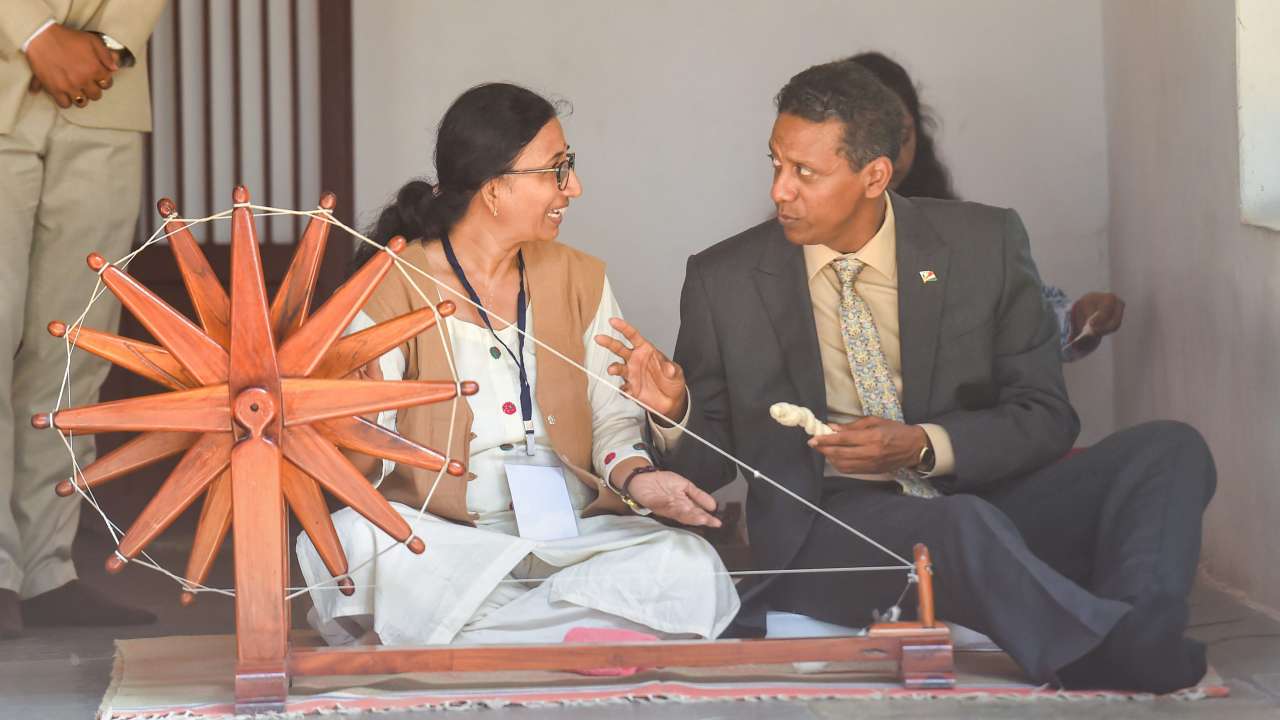 Seychelles President Danny Faure has visited Sabarmati Ashram and paid his tributes to Mahatma Gandhi and Indian Institute of Management (IIM) in Ahmedabad on Saturday. He arrived on a six-day visit to India on Friday.

Raveesh Kumar, the spokesperson of Ministry of External Affairs posted his tweet along with pictures Saturday afternoon

Where the message of truth and non-violence reverberates in eternity! President of Seychelles Danny Antoine Rollen Faure visited the Sabarmati Ashram and paid his tributes to Mahatma Gandhi. pic.twitter.com/UiiP9pno9g

His visit comes on the heels of his government’s announcement earlier this month that a joint project with India to develop a naval base at Assumption Island would not move forward.

There had been growing political opposition in Seychelles to the pact signed with India in 2015 alleging that it would have given India a strategic advantage in the Indian Ocean Region.

While visiting IMM the visiting dignitary met with Errol D’Souza , the director of the prestigious institute who is a long-time friend of his. He also visited Gujarat Forensic Science University (GFSU) in Gandhinagar before leaving for Goa. Later he is also scheduled to visit Utarakhand.

विद्या विनियोगाद्विकास! President of Seychelles, Danny Antoine Rollen Faure visited IIM Ahmedabad where the motto is ‘Education should be utilized for development and enlightenment.’ pic.twitter.com/XHk9uHEZLc

At GFSU, apart from interacting with university officials, Mr Faure met 18 police officers from the Seychelles who are undergoing training there in the sensitive institute. Governor O P Kohli would hosted a lunch for Danny Faure before his departure.

At a press conference on June 4, Mr Faure had said the Seychelles would develop military facilities on the island on its own, and the project with India “will not move forward”.

President Danny Faure is on a six day official visit at the invitation of the President Ram Nath Kovind. The visiting dignitary is accompanied by a high level delegation comprising two cabinet ministers, four secretaries of state and other senior officials. A business delegation is also accompanying with the President.

President Danny Faure will be accorded a ceremonial welcome at the Rashtrapati Bhavan on 25 June. On that day he will pay tribute to Mahatma Gandhi at Rajghat

His official engagements include meeting with the President, delegation level talks with the PM Narendra Modi, calls by the Vice President and the External Affairs Minister, and an address to the India-Seychelles Business Forum. The President will host a State Banquet in honour of the visiting dignitary.

According to a press release issued by Ministry of External Affairs on Friday, “The state visit of President Faure is part of regular high level exchanges between India and Seychelles, and will accord an opportunity to review our wide-ranging bilateral cooperation including in the fields of defence and security and development partnership”. He will conclude his India visit on Wednesday next.

According to MEA document on its official website, India-Seychelles relations have been characterised by close friendship, understanding and cooperation. Diplomatic ties were established with Seychelles after its independence in 1976.

The number of Indian origin persons in Seychelles is more than 10,000 which is significant of its total population of 96,000. In addition, there are 11,000 Indian citizens holding Gainful Employment Permits, who are mostly workers in construction sector, shop assistants and a few professionals.