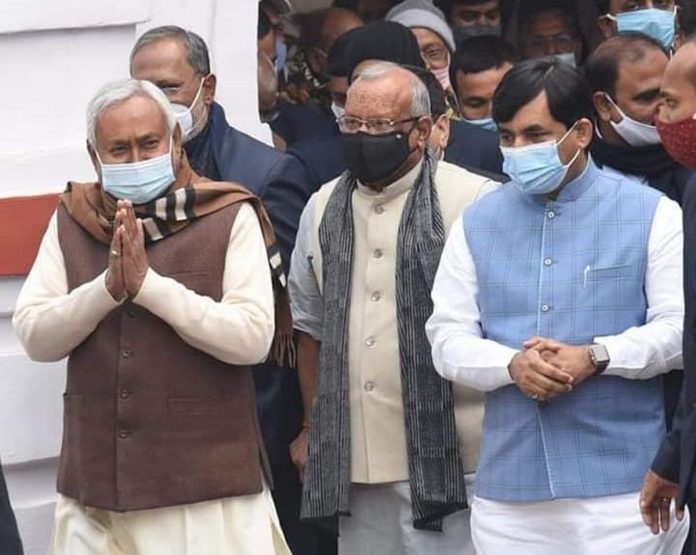 Former Union minister and BJP leader Shahnawaz Hussain on Tuesday took oath as minister in Bihar Chief Minister Nitish Kumar’s cabinet. Kumar expanded his cabinet today. During the much awaited cabinet expansion ceremony held at Raj Bhavan, Hussain was the first to be administered the oath of office by Governor Phagu Chauhan. He was elected to the Bihar legislative council last month.

The Bihar cabinet can have 36 members but had only 13, apart from the CM. The cabinet expansion had been hanging since the assembly polls due to chief minister Nitish Kumar’s disagreement with the BJP being the larger ally.

The BJP, which was the junior ally in the state had emerged as the second largest party in the assembly polls last year. Chirag Paswan’s LJP had contested solo and cut into the votes of Nitish Kumar’s Janata Dal United, pushing it down from 71 seats to 43. It also gave the upper hand to the BJP, which won 74 seats.

Shahnawaz Hussain was Nitish Kumar’s colleague in the Atal Bihari Vajpayee’s government. This time Hussain is under Kumar in his cabinet. On his relocation as minister from New Delhi to Patna, Hussain said its his good fortune that he got the opportunity to work in his homeland.

Shahnawaz Hussain has been three-time Lok Sabha MP from Bhagalpur in Bihar. He did not contest the Lok Sabha polls in 2019 as his constituency went to the Nitish Kumar’s JD(U) as part of the seat-sharing deal with the BJP.

Shahnawaz Hussain was elected unopposed to the Legislative Council of Bihar on January 21, 2021, triggering speculation about his induction in the Bihar cabinet.

Among the 17 ministers inducted today, the BJP got nine berths, the JD(U) got eight. The important departments, like Home, Personnel, Education, Rural Development, Rural Works, Water Resources, remained with the JD(U).