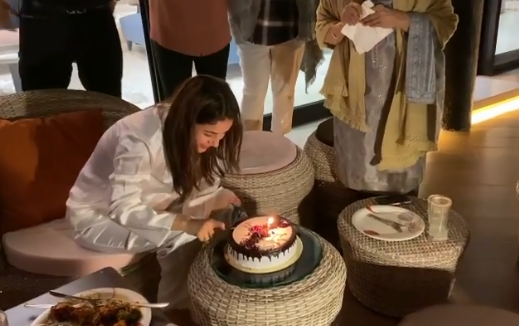 Former Bigg Boss contestant Shehnaaz Gill is celebrating her 28th birthday on Wednesday.  The Punjabi actor and singer rang her special day with rumoured boyfriend Sidharth Shukla’s family.  Gill looked adorable in a night suit as she cut the cake. She offered the first slice of the cake to Shukla who asked her to feed it to his mother and sister first who were also present at the party.

Another video was shared by Gill on Instagram in which Sidharth Shukla throws her into the pool after her birthday countdown. The duo had met in Bigg Boss house and became quite close to each other. Although, they have never admitted their relationship, their fans continue to link them with each other. In an interview, Shehnaaz had admitted being in love with Shukla. However, she stated it was one-sided and she did not want to lose friendship with him. Shukla, on the other hand, continues to maintain that they are just good friends. Gill had also attended Shukla’s birthday bash in December this year.

Shukla was adjudged as the winner of Bigg Boss 13, while Gill was one of the finalists. The duo has featured in several music videos together and their chemistry has been loved by many.  Gill, who  worked in several Punjabi videos and films became a household name after her participation in Bigg Boss 13. Shukla, on the other hand, started his career with modeling and worked in several television serials.

Sidharth Shukla continues to remain one of the most popular participants in the history of Bigg Boss. He recently hosted a Weekend Ka Vaar episode in the absence of regular host Salman Khan who could not shoot for the episode due to work commitments. During the episode, Shukla grilled several contestants including Rubina Dilaik and Nikki Tamboli and also announced the week’s eviction.