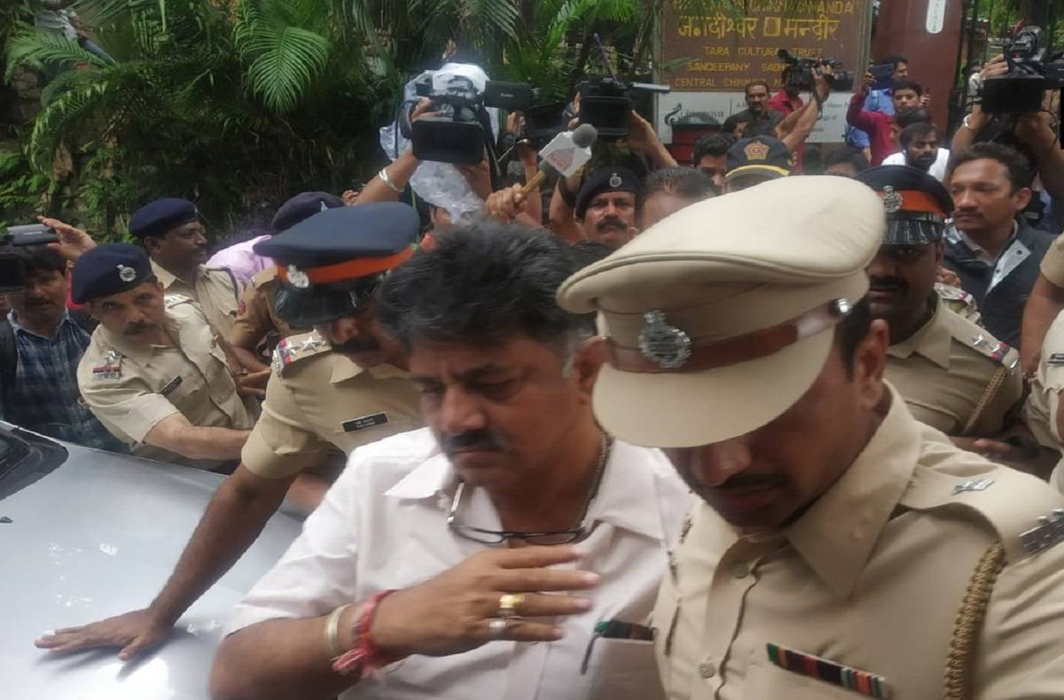 The on-going Karnataka government crisis escalated further today (Wednesday, July 10) with Congress leaders DK Shivakumar, Milind Deora and others were detained and taken away in a police van from outside theRenaissance Mumbai Convention Centre Hotel when they went to meet the 10 dissident JD(S)-Congress legislators who have been staying at the premises since Saturday.

The rebels had earlier approached Mumbai Police, saying they felt “threatened” by their state leaders and do not want to meet them in this regard.

They have moved the Supreme Court and it is likely to take up the plea filed against Karnataka Speaker KR Ramesh Kumar for not accepting their resignations.

Kumar had rejected the resignations of nine of 14 coalition MLAs on the ground that they were not tendered in the correct format. The Speaker has fixed dates over the next six days to meet and interview the five MLAs whose resignations were found to be in order.

The Speaker’s decision gives the Congress-JD(S) combine breathing room to pull the government back from the brink of collapse — if the resignations were accepted, the alliance would have been reduced to a minority of 103, less than BJP’s 105, in the 224-member House, after two Independent MLAs, too, withdrew support and tendered resignations Monday.

Earlier today, Congress troubleshooter Shivakumar morning was stopped at the gates of the Mumbai resort where the 10 rebel MLAs are staying. Shivakumar was accompanied by JD(S) MLA Shivalinge Gowda.

Shivakumar insisted that he has “booked” a room in the hotel. He said he will not leave without meeting the MLAs. Amid the chants of “Shivakumar go back,” the Congress leader said, “I only have a heart that I have come to extend to my friends…politics is an art of possibility,” he said.

“I’ve booked a room here. My friends are staying here. There has been a small problem, we’ve to hold negotiations. We can’t go for a divorce immediately. There is no question of threatening, we love and respect each other,” he told reporters outside the hotel.

Last night, the 10 rebel MLAs had approached the police seeking security as they feared that Karnataka Chief Minister HD Kumaraswamy and DK Shivakumar will “storm” into the premises and threaten them when they reach Mumbai.

Tight security cover — State Reserve Police and Riot Control Units — has been deployed around the hotel after the letter.

Yeddyurappa said Kumaraswamy should go since his government “doesn’t have the numbers” and “make way for a BJP government” in the state.

Yeddyurappa, who according to a Hindustan Times report was on his way to meet the Karnataka governor Vajubhai Vala with the demand to sack Kumaraswamy government, added that “the coalition government had lost the moral right to continue.”

Earlier, the 76-year-old BJP state president in Karnataka had suggested that “it was not late” for Kumaraswamy to quit in the view of the looming Assembly session from July 12.“On 12th July, Assembly session will begin but they don’t have the numbers, it will be an illegal session. It is not too late; you (Karnataka CM, HD Kumaraswamy) should resign and make way for a BJP government, he said.”

Yeddyurappa said that he will also meet the Karnataka Assembly Speaker at 3 pm today to register protest over alleged tearing of resignation letters of some rebel MLAs by Congress leader & MLA DK Shivakumar on Saturday.

In a separate development the rebel MLAs from both the Congress and the JD(S)moved Supreme Court accusing the Speaker of abandoning his constitutional duty and deliberately delaying acceptance of their resignations. Supreme Court is expected to hear the matter tomorrow.

The matter was mentioned before Chief Justice of India Ranjan Gogoi, who said the court will consider listing the case tomorrow. The petition alleged that the Speaker had acted in a partisan manner and was deliberately not accepting their resignations.

Senior advocate Mukul Rohatgi who appeared for the rebel MLAs pressed for an urgent hearing saying “time is the essence” in the matter. “We will see,” the bench, which also comprised justices Deepak Gupta and Aniruddha Bose said.

The Speaker has fixed dates over the next six days to meet and interview the five MLAs whose resignations were found to be in order. The Speaker’s decision gives the Congress-JD(S) combine some breathing room to try and pull the government back from the brink of collapse.