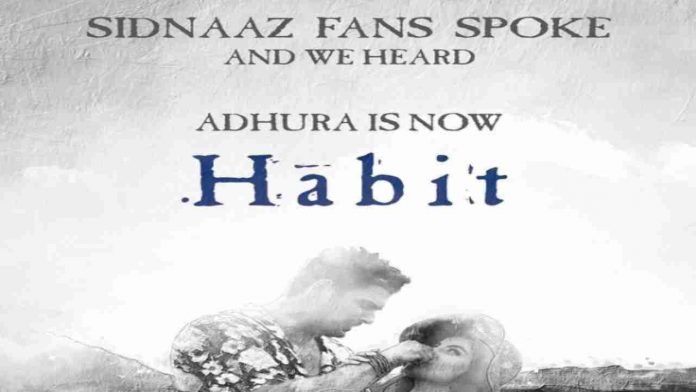 After the death of Bigg Boss 13 winner Sidharth Shukla, fans are eagerly waiting for his last music video with his rumoured girlfriend Shehnaaz Kaur Gill. The couple became an internet sensation through their adorable chemistry in BB house and it’s been more than a year now but their popularity has not faded.

On Saturday, singer Shreya Ghoshal had unveiled the poster of SidNaaz music video, Adhura which was slated to release by the title Habit. However, due to Sidharth’s demise, the makers of the song had changed the title to Adhura.

Earlier, SidNaaz fans, who are avid social media users and keep inside information about every development regarding their favourites, demanded to change the title to Habit. They also bashed the makers for monetising Sidharth’s death. A day ago, Shreya Ghoshal dropped the poster that was titled Adhura.

However, the Saregama banner has now changed the title to Habit again on fans’ popular demand. They announced the development on social media with the poster of SidNaaz’ last song. The poster read that SidNaaz fans spoke and we heard, Adhura is now Habit.

Talking about the song, it has been sung by Indian ace singers Shreya Ghoshal and Arko Parvo Chatterjee. The song is slated to release on October 21.

Habit will mark the last song of popular couple Sidharth Shukla and Shehnaaz Gill. On September 2, SidNaaz fans woke up with a shock as Sidharth passed away due to a massive heart attack. He was 40 and breathed his last in Mumbai’s Cooper Hospital. His last rites took place at the Oshiwara crematorium.

Heart-breaking videos and pictures of Sidharth’s funeral surfaced on the internet wherein Shehnaaz was spotted inconsolable. His funeral was attended by celebrities including Varun Dhawan, Vidyut Jammwal, Arti Singh, Karanvir Bohra, Rashami Desai, and others.