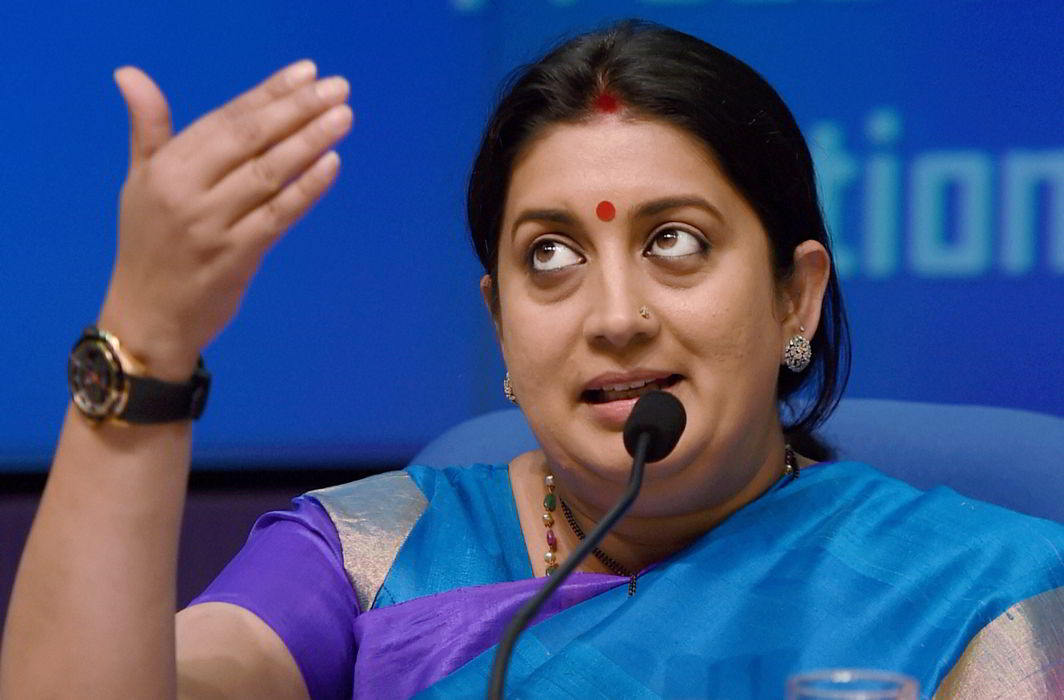 Irked at his ‘Shah-zada’ jibe against Jay Shah, son of BJP national president Amit Shah who is in the centre of a controversy over his company’s meteoric rise in wealth since May 2014, Union Information and Broadcasting minister Smriti Irani, on Saturday, hit out at Congress vice president Rahul Gandhi through a post on micro-blogging website, Twitter.

Irani, who has often launched both veiled and direct attacks on Rahul through her Twitter posts, was peeved at the Congress president red-flagging the purported gag order by an Ahmedabad court against The Wire which prohibits the news portal from publishing any articles about Jay Shah.

The Wire had earlier this month published an article which showed how Jay Shah’s company saw its wealth and annual turnover swell by a staggering 16000 times – from a meager Rs 50000 to over Rs 80 crore – ever since Narendra Modi drove the BJP to power at the Centre in May 2014. The article had given the Congress and other Opposition parties some much needed ammunition to hit out at Amit Shah and Prime Minister Narendra Modi.

Days after the article was published, an ad-interim injunction was issued by fourth Additional Senior Civil Judge, Ahmedabad Rural to The Wire. The injunction restrained The Wire from “using and publishing or printing in any electronic, print, digital or any other media, or broadcast,telecast, print and publish in any manner including by way of interview, holding TV talks, debate and debates, news items, programs in any language on the basis of the article published in ‘THE WIRE ‘ (dated 8/10/2010) either directly or indirectly on the subject matter with respect to the plaintiff in any manner whatsoever.”

The Congress vice president had, in a series of tweets that were posted over the past few days, mocked at the BJP and Prime Minister Narendra Modi over the gag order against The Wire.

On Saturday, Irani seems to have noticed the Congress vice president’s tweets and decided to hit back. Averring to the fact that Rahul Gandhi was himself out on bail in the National Herald case, Irani said: “a person out on bail mocks the courts” and claimed that the Congress vice president’s attack against the BJP’s top leadership would not help his party win the Gujarat assembly polls due in December this year.

Irani has often been among the first BJP leaders to hit out at the Congress vice president on various issues against the BJP leadership that he red flags in his Twitter posts or public appearances. It may be recalled that Irani has been desperately trying to woo the electorate of Rahul’s Lok Sabha constituency, Amethi, from where she had unsuccessfully contested the 2014 Lok Sabha polls. Irani, along with Amit Shah and Uttar Pradesh chief minister Yogi Adityanath, had earlier this month also visited Amethi where she had launched a scathing attack against Rahul for allegedly neglecting his constituency.