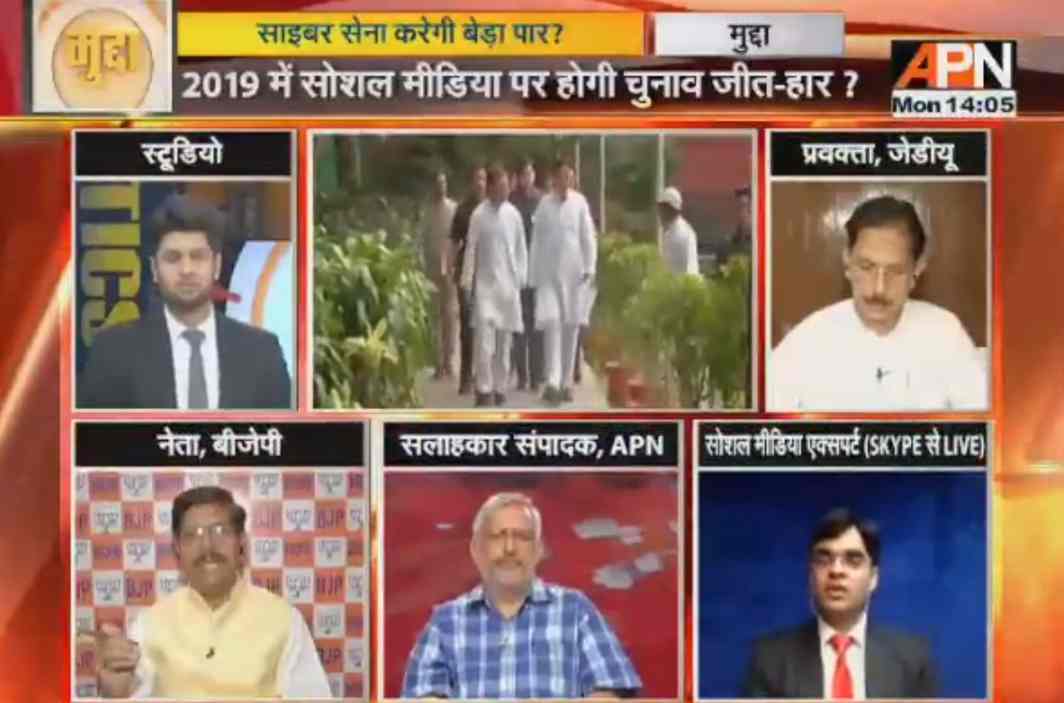 Thakur said: “Social media has become a powerful force. The BJP recognises this, and is creating a strong social media cell.”

When Anant asked how such posts will be monitored or censored, Thakur said:”It’s one of the fastest modes of communication. The BJP is a responsible party, and knows how to use the medium well. After all, we are a sanskari (cultured) party. We know the difference between rumour, hate and campaign.”

Raju said: “So far, we have not much to prove that it is a medium that is used responsibly. Cyber media freedom, when misused, has led to hate and lynchings in the past, and can become counter-productive as well. Stringent punishment should be handed over for such crimes. Congress, BJP, and all the other parties are readying their social media cells. All parties should ensure that the limits of this freedom are also borne in mind.”

Abbas said: ”It’s the computer age, and everybody is connected to WhatsApp, YouTube, Facebook, Twitter, etc. But social media alone is not enough to spearhead change. After all, the authenticity of most posts is highly doubtful.”

Maheshwari said: “The cyber cells of all parties are focusing only on advertising their viewpoints. Online reputation management is big. It’s being used as propaganda, and others’ views are demeaned.”

Thakur said: “The BJP believes in using social media responsibly.  The PM is careful, and sends out a clear warning to those who have been misusing the medium. However, there are thousands and thousands of followers of PM on social media. The characters/intentions of all cannot be ascertained.”

Anant wanted to know if mechanisms are in place to filter the data/posts.

Raju said: “The misuse should be stopped. Operators should be told that harmful posts that are detrimental to the nation’s integrity or that demean a particular person will not be tolerated. The Election Commission should give out clear instruction regarding do’s and don’t’s.”

What about fake accounts, Anant asked. “Those are dangerous as well,” Raju said.

Maheshwari said:”Certain posts are made viral, party funds go into that. A profile is very easy to create on social media.”

The debate was halted with the breaking news that Supreme Court has dismissed the review petition of Nirbhaya convicts.

Resuming the debate, Anant said: “Rahul Gandhi’s followers are 69 percent of users on social media, and this number is followed by Amit Shah’s. Are these accounts of such big leaders fake or real?”

Thakur said: “FB and Twitter are getting commercial. Followers’ numbers could be reflective of the funds
given to these companies for that.”

Mishra said: “Social media has been misused by BJP and by vested interests who have been spreading hate.”