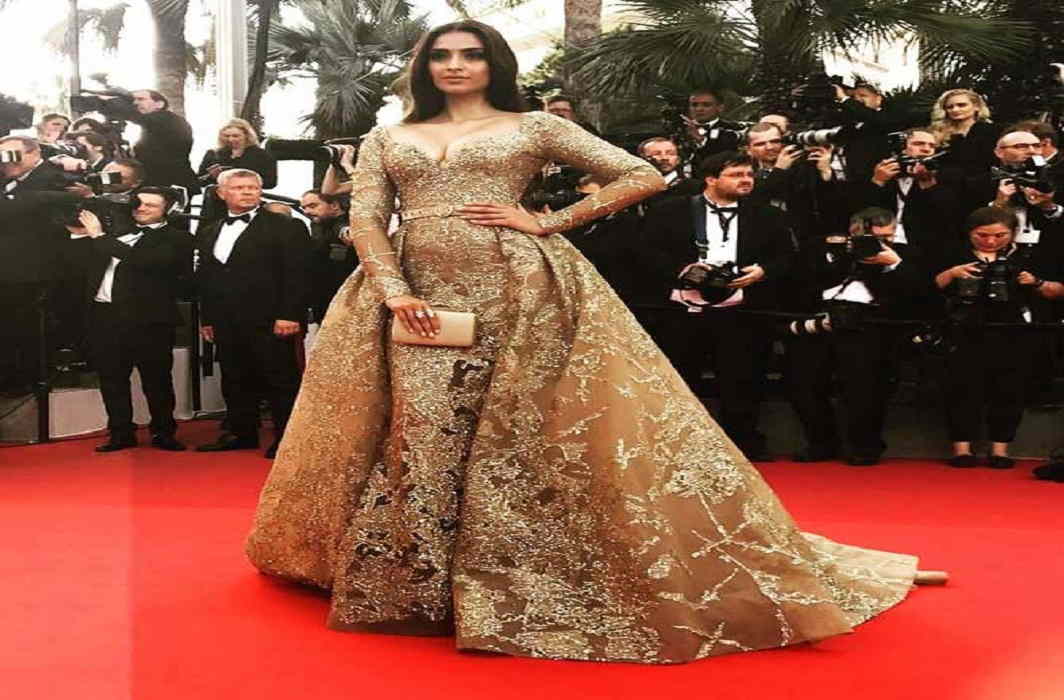 Styled by her sister, Rhea Kapoor, the Neerja actor, donned an Ellie Saab gown, an all gold-outfit styled with 42 Carats of Chopard Diamonds.

Day 6 of the Cannes Film Festival marked the closing stint of Sonam Kapoor with her second appearance on the red carpet. Styled by her sister, Rhea Kapoor, the Neerja actor, donned an Ellie Saab gown, an all gold-outfit styled with 42 Carats of Chopard Diamonds.

The gold appearance on the red line was her answer to critics as she wrote on Instagram, quotingMadonna, “To the doubters and naysayers and everyone who gave me hell and said I could not, that I would not or I must not- your resistance made me stronger, made me push harder, made me the fighter that I am today. It made me the woman that I am today. So thank you.’ “Madonna.”

Earlier, she made her entry on the red carpet in an embellished chiffon dress, accessorised with custom-made Kalyan jewellery. She walked the red carpet a day after Aishwarya, who took over from Deepika Padukone. The trio is co-ambassadors for LÓreal ParisIN.

Later on, The National Award-winning actress was seen posing with stars like Eva Longoria, who is also a brand ambassador of LÓreal Paris. She also managed to give an Indian touch in her Fish cut gown with western danglers. I know who I am. I am not perfect. I’m not the most beautiful woman in the world. But I’m one of them. Mary J. Blige #sonamatcannes #kalyanjewellery,” she wrote on Instagram.

I know who I am. I am not perfect. I'm not the most beautiful woman in the world. But I'm one of them. Mary J. Blige #sonamatcannes #kalyanjewellery