Gandhi also spoke about the ongoing nationwide Covid-19 vaccination drive. Slamming the BJP government, she said the government has inflicted untold suffering on the people of the nation by the way it has managed the Covid-19 pandemic. 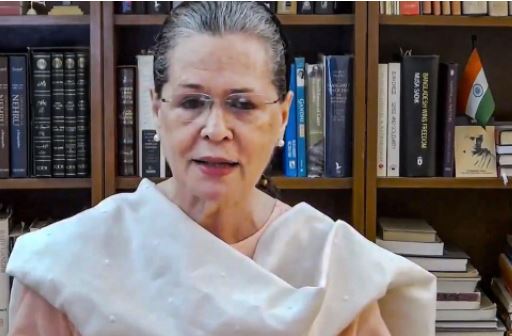 Congress President Sonia Gandhi on Friday hit out at the Centre over the ongoing farmers’ agitation, alleging that the government has shown shocking insensitivity and arrogance going through the charade of consultations between the centre and protesters.

Gandhi made remarks during her opening speech at the virtually held Congress Working Committee(CWC). She spoke on a host of issues, saying there were many pressing issues of public concern that required to be addressed in the upcoming session of Parliament.

The meeting was held to finalise the schedule for election of a new party president, to discuss the organisational election schedule sent by the party’s Central Election Authority, among other issues.

On the farmers’ protest against the three agricultural laws, Gandhi further said that it was abundantly clear that the three laws were hastily prepared and Parliament consciously refused an opportunity to examine any meaningful details of their implications and impacts.

The Congress party’s stand was clear from the beginning that these laws will destroy the foundations of food security based on Minimum Support Price, public procurement and Public Distribution System, added Gandhi.

In her virtual address, she also pointed out the government’s silence over the leaked WhatsApp chats between Republic TV Editor-in-chief Arnab Goswami and Broadcast Audience Research Council CEO, Partho Dasgupta. She said the national security has been so thoroughly compromised. The Defence Minister AK Antony had said that leaking of official secrets of military operations is treason, yet the government’s silence on these disturbing reports has been deafening, Gandhi said.

Those who used to give certificates of nationalism and patriotism to others have now been totally exposed, Gandhi remarked.

The purported WhatsApp chats between Dasgupta and Goswami revealed that latter was aware of the Balakot airstrike which the Indian Air Force conducted as retaliation to the Pulwama terror attack in February 2019 – at least three days in advance.

Gandhi also spoke about the ongoing nationwide Covid-19 vaccination drive. Slamming the BJP government, she said the government has inflicted untold suffering on the people of the nation by the way it has managed the Covid-19 pandemic. She added that it will take years for the scars to heal.

On the state of the country’s economy, she said the situation remained grim, and the large parts of the economy like MSME and the informal sector have been decimated. The manner in which the government has weakened labour and environmental laws was equally anguishing, said Gandhi adding that  panic privatisation has taken over the government which the Congress party can never accept and support.

Meanwhile, Congress party could reportedly hold the internal polls in February. It was also being indicated that organisational elections may be held between May 15 and May 30, which could see the election of a new president, party functionaries said on Friday.