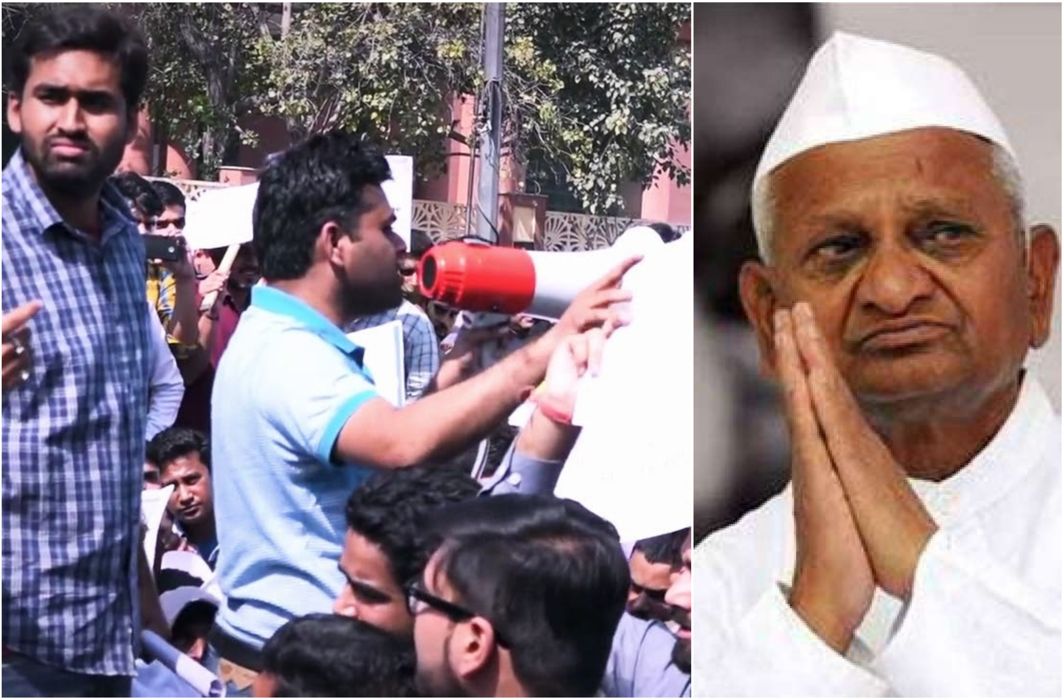 In a major distress for the candidates the SSC had to cancel the second shift of the paper at one venue during this year’s annual selection process.

With the protest against the alleged paper leak of the combined graduate level exam of the Staff Selection Commission (SSC) spilling into the fifth day on Sunday social activist Anna Hazare reportedly met hundreds of SSC aspirants in the national capital and urged them to walk on the path of non-violence.

Amid continuing demands for a Central Bureau of Investigation (CBI) probe, Hazare said, “We will wait for the government to take a decision and then see what we need to do. I urge all of you to not get violent in the meantime.”

Reportedly, in a major distress for the candidates who had prepared to appear for the examination on February 17 – the first day of the CGL Tier II exam – the SSC had to cancel the second shift of the paper at one venue during this year’s edition of the annual selection process.

While the screenshots of the exam paper – along with answers – were widely circulated on social networking platforms, the SSC, in a statement issued earlier, said, “The commission has received a few screenshots in the afternoon of 23.2.2018 of quantitative ability (paper-1) apparently taken on 21.2.2018 at around 12.30 pm belonging to a candidate namely Sachin Chouhan (roll number 2201281955). These snapshots are being circulated after about 48 hours of completion of the CGLE (Tier-II) Examination, 2017 and appear to be manipulated and would have no significance on the sanctity of the examination. Earlier also, at around 10.15 am on 21.2.2018, the commission received an information that some of the answer keys of paper I, to be held at 10.30 am on that day of the examination, were being circulated on the social media/e-mails. The commission investigated into the matter and found that the claims were absolutely bogus and baseless.”

“In continuation with the earlier discussions held with the protesting candidates of CGLE 2017, a delegation of the candidates met with the Minister of State, Ministry of Personnel, Pension and Public Grievances… After hearing the delegation, it was directed by the Hon’ble minister that though the paper 1 of 21.2.2018 was cancelled by the SSC on account of technical issues, to inquire into the allegation of leakage of this cancelled paper, the evidence being provided by the candidates be taken on record and if found substantiated, the matter will be referred to CBI for further enquiry,” said SSC chairman Ashim Khurana.

“Else, the crime branch of Delhi Police which is already seized of the matter upon a referral by the commission, shall complete its inquiry in a time-bound manner and submit its report for further necessary action,” he added.