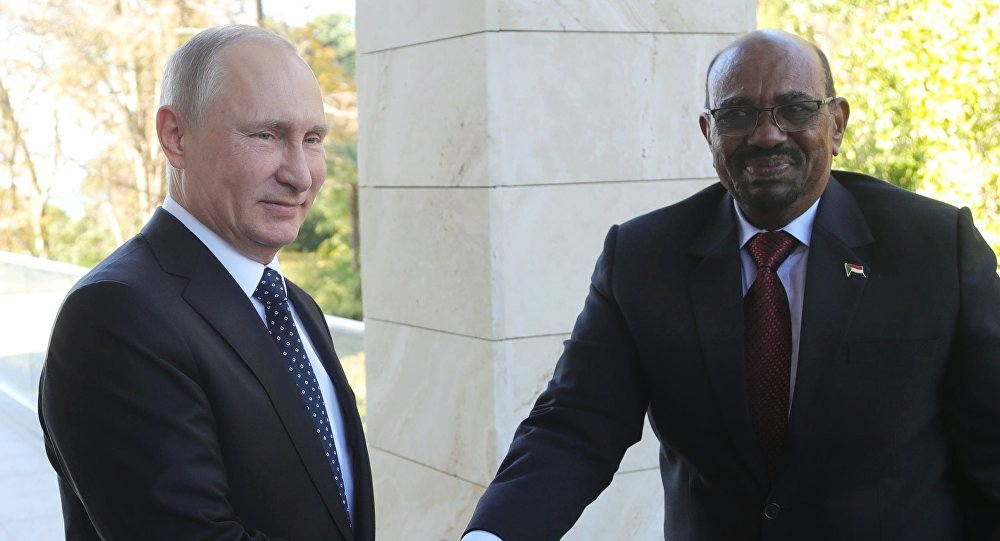 Khartoum’s move will irritate US, Israel and Saudi Arabia

At a time when major developments were taking place in Middle East, Africa is developing another crisis. Sudanese President Omar al-Bashir has told his Russian counterpart Vladimir Putin that US seeks to divide his country into five regions and asked for warplanes for protecting his country.

He revealed this to Russian RIA Novosti agency, while travelling to Moscow on Friday. He said “We have information that the US desire is to divide Sudan into five states if we don’t find protection.” Transcript of the interview was published on Saturday.

His fear was substantiated when he blamed US for ravaging the Arab world,” giving examples of Iraq, Syria and Yemen. He said that his country faced “great pressure” from Washington.

Some 20 years ago US had imposed tough trade sanctions against Sudan accusing of sheltering Osama bin Laden, who allegedly lived there for five years before his expulsion in 1996.

But recently, when Sudan shifted its foreign policy siding Saudi Arabia on the regional issues, Washington, has on October 6, announced the end of  the trade sanctions against that country. Moreover travel ban was also lifted against Sudan, one of the six Muslim countries facing similar ban after Trump administration came into power.

The travel ban against six Muslim majority countries faced tough opposition from rights campaigners and governments. Some of the US courts had also ordered its partial annulment.

Observers believe that US seems to be appeased by Khartoum’s foreign policy shift siding with its close ally Riyadh in the regional conflicts. However, Sudanese President’s Moscow visit asking for protection may once again derail the normalization in ties with Washington.

“We requested Su-30 [fighters] because they cover the Sudanese airspace, as well as Su-35. We have no intentions to carry out aggression abroad, we want to protect our country,” Bashir said

Sudanese president met his Russian counterpart Vladimir Putin and Defense Minister Sergey Shoigu in Sochi on Thursday. After the meeting, Bashir said that the two countries discussed a proposal of creating a military base on the Red Sea. Sudan has expressed its readiness to renew military-technical cooperation with Moscow.

Bashir asked Russian leadership to provide “protection from the aggressive actions of the US,” as he believed that division of Sudan into north and South Sudan in 2011 was a result of American policy. Tens of thousands of people have lost their lives in South Sudan due to a civil war since 2003.

In 1967, Sudan had broken ties with US because of its support to Israel in  Arab-Israeli War.  Diplomatic ties were resumed in 1972 but were deteriorated when US designated Sudan as a state sponsor of terrorism in 1993. US embassy in Khartoum had suspended operations in 1996. However, it was reopened in 2002.

Observers believe that Sudan’s move to ask protection from Moscow and requesting for buying warplanes could irritate US, Israel and Saudi Arabia  who were working together to reduce rising Iranian influence in the region. Russia, Iran, Syria, Iraq and Lebanon’s Hezbollah have fought together against the most heinous terror group Daesh (IS). It is considered to be game changer in the regional politics.