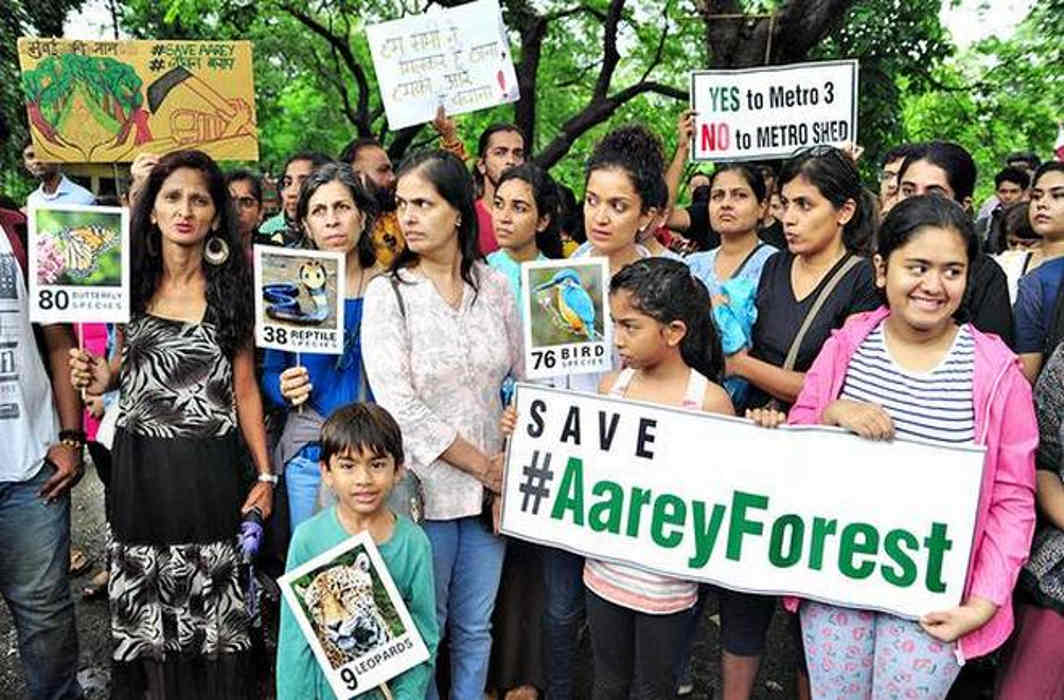 Citizens protesting against the construction of Metro car shed in Aarey Forest formed a human chain for the fourth consecutive Sunday this week, September 22, The Hindu reported.  The crowd has considerably become thinner as compared to earlier weekends; however, the protests have now spread to multiple locations. Politicians like Sanjay Nirupam joined the protest carrying out a ‘chipko’ protest by hugging the trees.

“We only illustrated how the chipko movement is to be done. If the government still cuts the trees, we will show them the real chipko movement. We are ready to stand with the trees every time the need arises,” Nirupam said.

“I would like to ask Chief Minister Devendra Fadnavis that if a forest with more than 4.5 lakh trees isn’t a forest, then is it Lokhandwala garden? I also request Prime Minister Narendra Modi and Home Minister Amit Shah to visit Aarey once rather than merely speaking about the environment,” he added.

According to reports, hundreds participated in the protest including children and senior citizens. People were heard shouting slogans such as ‘No car-shed or else no vote’.

Haridas Yadav, a protester from Young Indian Social Association, said, “The government and Mumbai Metro Rail Corporation Limited (MMRCL) are trying to confuse us with their statements. They are saying that Metro will reduce pollution from vehicle emissions but there has been no change in the pollution levels after the first Metro line which runs between Ghatkopar to Versova came.”

He said pollution had, in fact, increased since the first line started. “The Metro trains are fully air-conditioned which means the emission of Chlorofluorocarbons (CFCs) will rise further. Also, there is a chance that more than 3,800 trees could be cut in this forest,” he added.

A group of Mahul residents also protested stating that the refineries area has made it the worst place to live in the city. Pravin Haldankar, a resident, said, “The 17 refineries in Mahul have made it the highest polluted area in the city. The pollution created by the refineries results in one death per day. Aarey is a heaven and we do not wish to make it hell like Mahul.”

Anish Jaswani, Mumbai in-charge of Evolv, a youth movement platform, said, “None of the protesters is against the Metro, but we are against the way they are forcing the car shed into Aarey. Even if the car shed was to be made by cutting few numbers of trees, we would have supported it for the development motive, but such large number of trees cannot be felled for development.”

In 2015, city authorities and the Mumbai Metro Rail Corporation announced a plan to clear 30 hectares of Aarey colony to build a car shed for the Mumbai Metro 3 line that is currently under construction. Four years and multiple legal challenges later, the municipal corporation’s Tree Authority committee on August 30 approved a proposal to cut down 2,702 trees in Aarey colony to make way for the metro car shed.