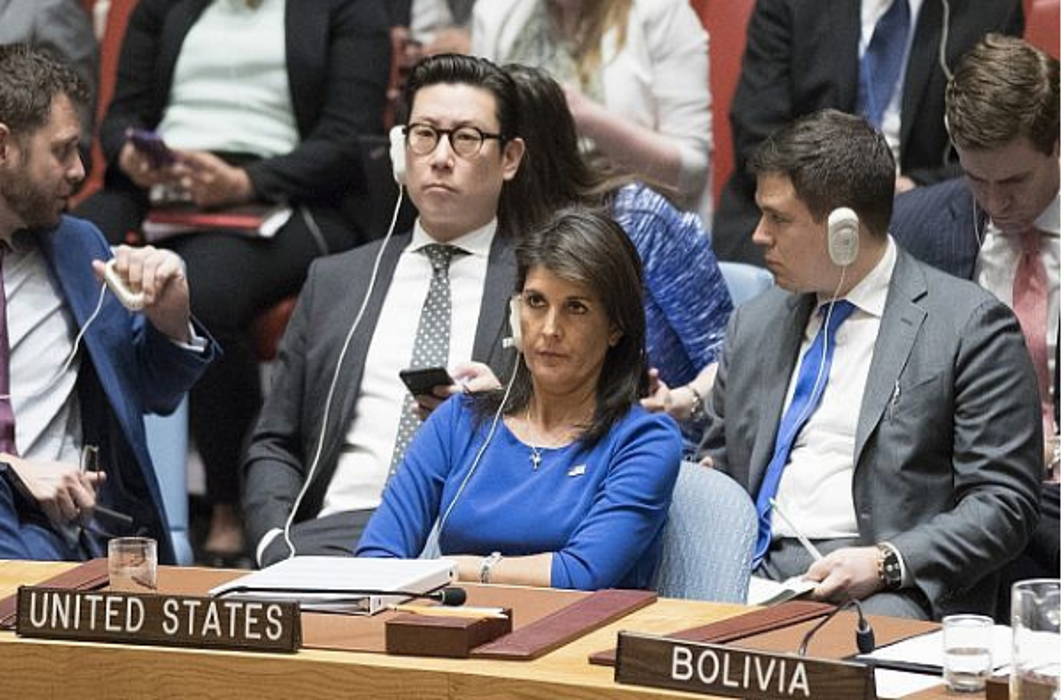 US vetoes Kuwait drafted resolution on Israel aggression on Palestinians

The United States has been facing more isolation under President Donald Trump for its support to Israel. After facing criticism on recognizing Jerusalem as Israel’s capital, Washington voted against a Kuwait-drafted United Nations Security Council resolution, on Friday, calling for the protection of Palestinian civilians.

Ten countries, including Russia and France, voted in favour of the Kuwait-sponsored resolution on Friday. Four others – Britain Poland, the Netherlands and Ethiopia – abstained, while the US was the only country to vote against it.

The resolution calling for international protection for Palestinian people was watered down with three time revisions. The final draft called for “the consideration of measures to guarantee the safety and protection of the Palestinian civilian population in the occupied Palestinian territory, including in the Gaza Strip”.

US Ambassador to the UN Nikki Haley described the resolution as “grossly one-sided” as pinned the much blame of Palestinians’ suffering on the Hamas movement, which administers the Strip.

Palestinian Ambassador Riyad Mansour said the veto risked “undermining the council’s credibility and authority,” and proved that the US had “extreme mal-intent.”

According to Kuwait’s official KUNA news agency, Mansour Al-Otaibi, Kuwait’s permanent ambassador to UN has said that UNSC failure to adopt the resolution is “disheartening”. While addressing the UNSC session he said that this would encourage Israel to continue its decades-long aggression against the Palestinians which escalated in the past few months.

In a related development Kuwait’s Minister of Social Affairs and Labor Hind al-Sabeeh, while participating in a solidarity event with Palestinians organized by Arab Labor Organization (AOL) in Geneva, on Friday, said Israel is the only country that takes no heed of the UN resolutions, of human rights, and has gone too far in oppressing the Palestinian people.

Meanwhile, Hanan Ashrawi, the executive member of Palestinian Liberation Organization (PLO), said on Friday that the US had once again demonstrated its “blind loyalty to Israel and tried to absolve it of any wrongdoing despite its egregious violations, deliberate massacres and willful killings and war crimes.”

“With its veto, the United States is once again attempting to justify the lawlessness and cruelty of Israel’s military occupation, while providing Israel with legal and political cover to pursue its assault on the Palestinian people and on international law and international humanitarian law.”

The US was in turn the only country to vote in favour of a revised draft-resolution it submitted subsequent to the Kuwait-sponsored initiative. The second vote saw 11 countries abstaining and three rejecting it. The US version had omitted references to Israeli use of force and protecting Palestinians. Instead, it demanded that Hamas and other Palestinian groups cease “all violent provocative actions” in Gaza.

Responding to Kuwait’s gesture Hamas resistance group has expressed its gratitude to Kuwait for blocking the US sponsored resolution at  UN security Council imposing responsibility of escalation of violence on the Palestinian group.

“We are deeply grateful to Kuwait for the failure of the U.S. draft resolution condemning the legitimate right of the Palestinian people to resistance. The President of the United States Donald trump wanted to divert attention from the crimes of the occupiers”, – reads the statement of the group.

More than 120 Palestinians have been killed and thousands wounded by Israeli forces during weeks-long “Right to Return” peaceful protests in the besieged Gaza Strip near the fence with Israel. Among the victims have been medical professionals and journalists.