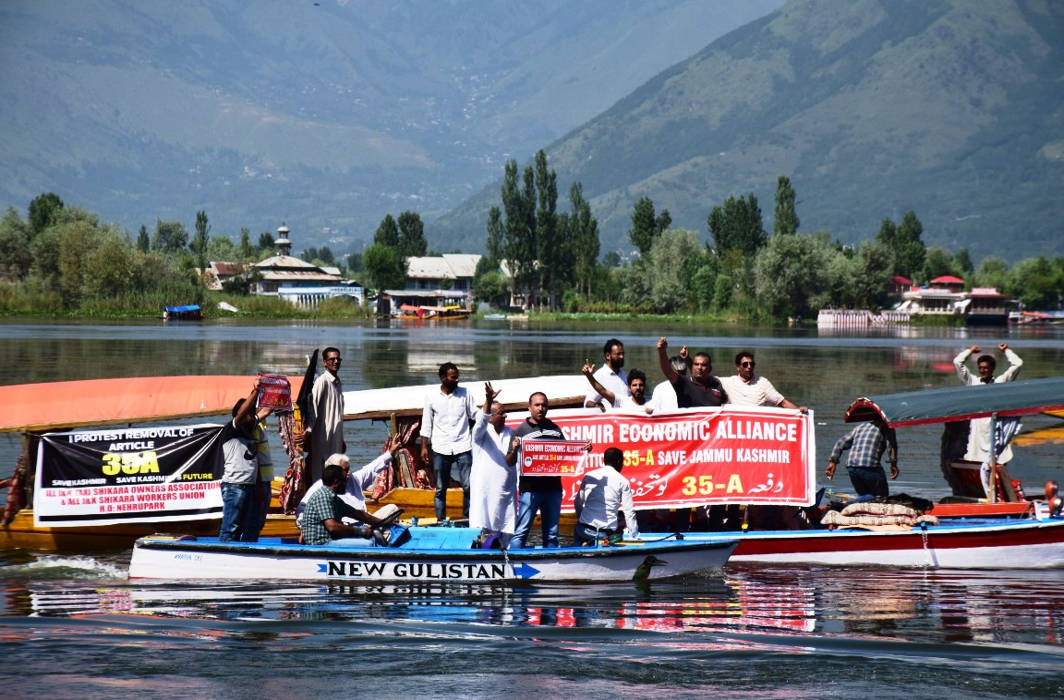 Amid heightened tension with an ongoing crackdown by security forces and continued clashes between forces and militants after the massive February 14 Pulwama terror attack, the Supreme Court today (Monday, Feb 25) listed the hearing of pleas challenging the constitutional validity of Article 35A from February 26-28.

The decision to list the petitions this week comes despite the counsels of the State, which is currently under President’s Rule, urging the top court to defer the hearing. Key political players in the State – Mehbooba Mufti’s PDP and Farooq Abdullah’s National Conference – too have repeatedly urged the top court to defer the hearings, arguing that the State must first go to assembly polls and that the government elected by the people can then decide the legal stand to be taken on these petitions.

While BJP and Narendra Modi government favour abrogation of Article 35A, viewing it as a permanent solution to Kashmir problem, even BJP ally and Peoples’ Conference president Sajjad Lone warned them against any tampering with the provision. Speaking to The Indian Express, Lone said that any change introduced to the special Constitutional character will only deteriorate the situation further in the state.

Only Narendra Modi can give reply to Pakistan: Amit Shah

Lone said that the if the Centre decides to fiddle with Article 35-A, it will be slaughter of the mainstream thought in the Valley. “You have to understand that these are Articles of trust, Articles of dignity. This is how India as a country is perceived here — will it or will it not stand by its promises? It would be the unluckiest day because that would be the death of mainstream thought here,” Lone told the daily.

“If they (Centre) want to slaughter the mainstream thought, they are most welcome but that is what they will be doing by tinkering with Article 35A,” he added.

The decision to hear the petitions against Article 35A comes at a time when the BJP-led Union government of Prime Minister Narendra Modi is under renewed pressure from the Hindu right-wing to take a firm stand in favour of the prayer to abolish the special status granted to J&K under the Constitution.

The Centre has, traditionally, been neutral on petitions that have challenged Article 35A and Article 370. However, abolition of these Articles has been high on the political agenda on the BJP and a long-pending election manifesto promise of the saffron party.

In wake of the Pulwama terror strike, the Hindu right has once again become vocal in its demand for the Articles to be abolished and there have been indications that the Centre might finally take a decision that reflects the sentiments of its vote bank.

The Article has been criticised by the BJP as a provision that encourages alienation, deepens the concept of a separate identity and creates a political gap between J&K and the rest of India. “Article 35A is a constitutional mistake. It was incorporated through a presidential order and not through the parliamentary process,” said Surinder Amabardar of the state BJP last year.

Those in favour of retaining Article 35A fear that its repeal would lead to further erosion of J&K’s autonomy and trigger demographic change in the Muslim majority valley. Some political parties say the Kashmir resolution lies in greater autonomy, even as separatists fan paranoia about the possibility of Hindus ‘flooding’ the valley.

On Sunday, J&K governor Satya Pal Malik issued a statement urging people not to spread rumours and remain calm after the state administration issued many orders including supplying ration at the earliest, cancelling leave of doctors and policemen, rationing of petrol to the general public, leading to a war hysteria. The widespread arrests of Jamaat-e-Islami cadres and separatists contributed to these rumours.

Article 35A was added to the Constitution through a presidential order in 1954. The law prohibits non-permanent residents from a permanent settlement in the state, acquiring immovable property, government jobs, scholarships, and aid. Some also argue that the Article is discriminatory against J&K women as it rules out their state subject rights if they married non-permanent residents.

Article 35A is a unique provision of the Constitution of India. It is a part of the Constitution, but does not figure in the bare Act! One does not find Article 35A after Article 35 in the Constitution. Article 35 is followed by Article 36. But, 35A can be seen in Appendix  i  of  the  Constitution.  It was conceived exclusively for the benefit of the State of Jammu and Kashmir through a Presidential Order issued in 1954. It empowers the Jammu and Kashmir State Legislature to define the State’s ‘permanent residents’ and their special rights and privileges. It was specially devised to save the State subject laws that had already been defined under  the  Dogra ruler Maharaja Hari Singh’s regime and notified in 1927 and 1932. However, this Article which came into force in 1954 without a place in the bare Act of the Constitution was unknown to the public. It came into limelight only when cases were filed in the apex court challenging its validity, thereby raising an intense debate.

Notwithstanding  anything  contained  in  this  Constitution,  no  existing  law  in  force  in  the  State  of  Jammu  and  Kashmir,  and  law  hereafter  enacted  by  the  Legislature of the State

(a) defining the classes of persons who are or shall be permanent residents of   the State of Jammu and Kashmir; or

(b)  conferring  on  such  permanent  residents  any  special  rights  and  privileges,  or    imposing upon other persons any restrictions, as respects

i.Employment under the State Government;

ii.Acquisition of immovable property in the State;

iii  .Settlement in the State; or

iv.Right   to   scholarships   and   such   other   forms   of   aid   as   the   State   Government may provide shall be void on the ground that it is inconsistent with or takes away or abridges any rights conferred on the other citizens of India by any provision of this Part’.

Farooq Abdullah, his son Omar Abdullah and Mehboona Mufti – all former chief ministers of J&K – have gone on record with their opposition to any attempt that will dilute Article 35A and Article 370.

In a series of tweets late Sunday, Mufti said:

“Valley rife with speculation about status of Article 35. Before taking a decision, GoI must consider –

Reacting to the listing of the petitions in the Supreme Court from February 26 to February 28, and to unsubstantiated reports that the Centre might take a stand against the continuance of Article 35A, Omar Abdullah told reporters: “The Centre and Governor have only one responsibility right now and that is to hold elections. So, hold elections, let people take the decision, the new government will itself work towards safeguarding Article 35A.”

In October 2002, the J&K high court held that women married to non-permanent residents will not lose their rights. The children of such women however don’t have succession rights.

An NGO, We the Citizens, challenged 35A in the SC in 2014 on the grounds that it was not added to the Constitution through an amendment under Article 368. It was never presented before Parliament, and came into effect immediately, the group argued.

In another case in the SC last year in July, two Kashmiri women argued that the state’s laws, flowing from 35A, had disenfranchised their children.

Responding to their plea, the apex court sent notices to the Centre and state in July 2017. Advocate General K Venugopal told the bench of the then Chief Justice of India (CJI) J S Khehar and Justice D Y Chandrachud that the petition against Article 35A raised “very sensitive” questions that required a “larger debate”.

On May 14, 2018, the SC deferred hearing on the petitions challenging Article 35A. The Centre told the bench that the matter is very sensitive and since the interlocutor is making efforts for a solution, the court should not pass any interim order at present as it would be counterproductive.

Representing the J&K government, advocate Rakesh Dwivedi said SC has already settled the issue by ruling that Article 370 of the Constitution has already attained permanent status. “In any event as the issue required interpretation of various constitutional provisions, let there be no interim order,” Dwivedi appealed to the bench.

Senior advocate Ranjit Kumar, counsel to a petitioner, countered and said: “It is a strange situation in J&K as persons from Pakistan can come and settle in the state under a law but those who have been staying for generations cannot even get a government job.”