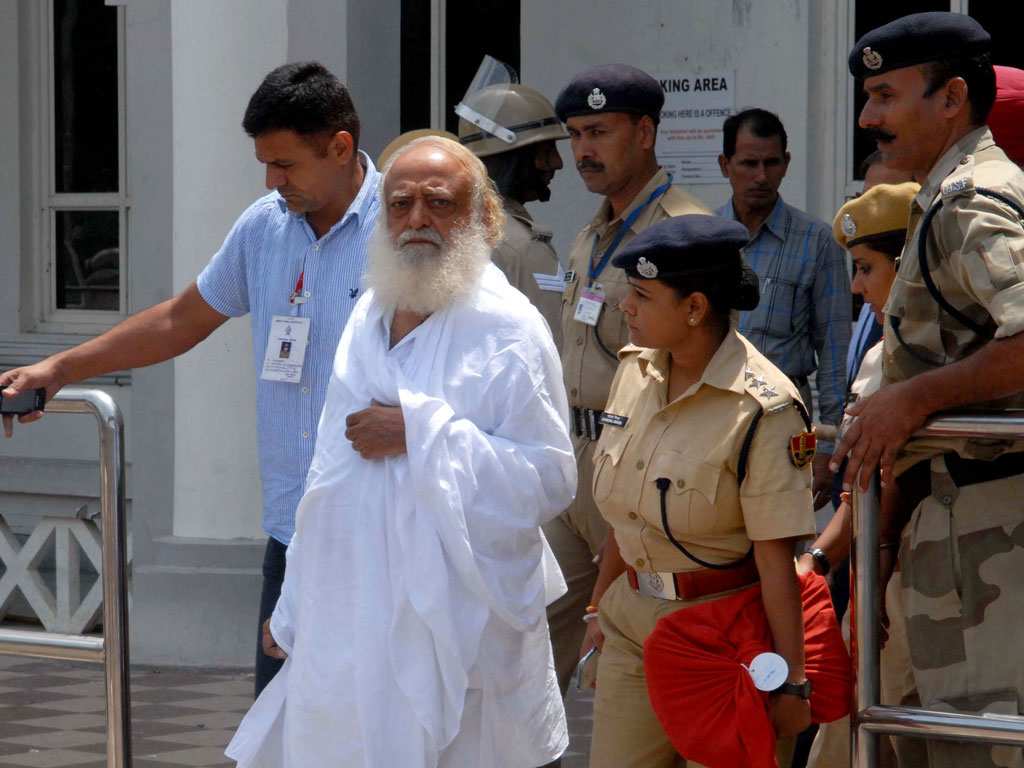 Asaram has been in jail since August 31, 2013 for allegedly raping a 16-yearold schoolgirl and is facing prosecution under the Protection of Children from Sexual Offences (POCSO) Act. He has also been accused of rape by two Surat-based sisters, a case that is pending trial in Gandhinagar

Hours before a special CBI court sentenced Dera Sachha Sauda chief Gurmeet Ram Rahim to serve 10 years in prison for allegedly raping two of his followers in 2002, the Supreme Court, on Monday, ticked off the Gujarat government for dragging its feet in the trial of another self-styled Godman – Asaram Bapu – in a rape case that dates back to 2013.

The apex court was hearing a bail plea moved by Asaram, who has been lodged in a jail in Jodhpur, Rajasthan since August 2013. The court, which has rejected several bail pleas moved by the Godman earlier, also questioned the Gujarat government on why the victim in the case had not yet been examined.

“Why is there a delay despite the earlier direction for expeditious trial? Why has the victim not been examined so far…she is the most crucial witness in this case”, a bench of Justices N V Ramana and Amitava Roy said. The Bench, which posted the matter for its next hearing after Diwali, also directed Additional Solicitor General Tushar Mehta, who was appearing for the Gujarat government, to file a progress report in the case by the next date of hearing.

Advocate Saurabh Ajay Gupta, who appeared for Asaram, said that the counsel of the accused have to prove the Godman’s defence for which examination of the victim is important as they will not be able to press for bail until this legal requirement is met with.

The victim’s lawyer, senior advocate Sanjay Hegde, sought speedy trial of the case and said that the court should issue a direction to examine his client beforeSeptember 23, which is the next date of hearing of the case before the trial court.

Asaram, who has been lodged in a jail in Jodhpur, Rajasthan since August 2013, is accused of raping a 16-year-old schoolgirl at his ashram earlier that year. The minor girl, a resident of Shahjahanpur in Uttar Pradesh, had claimed that she was raped by Asaram while staying in his ashram in Manai village near Jodhpur. Asaram faces prosecution under provisions of the stringent Protection of Children from Sexual Offences (POCSO) Act of 2013 based on the girl’s complaint and has been in jail since filing of FIR in 2013.

The 76-year-old Godman is also accused in another case of rape registered in Gujarat which was filed by two Surat based sisters who had accused Asaram and his son Narayan Sai of sexually assault between 2001 and 2006 while they were staying at Asaram’s ashram in Surat. The trial in this case is pending in a court in Gandhinagar.

This is not the first time that the apex court has noted unnecessary delay in the case. On April 12, the court had asked a trial court in Gujarat to expedite the recording of evidence of prosecution in the cases filed by the Surat sisters.

The apex court, on November 18 last year, had also noted that the prosecution witnesses were being attacked and sought the response of the Centre and the five states on a plea seeking a CBI probe into the alleged murders and attacks on witnesses.

On January 30, the court while dismissing his bail plea had observed that a fake document had been submitted in the court to persuade them to grant him bail. The court had then ordered registration of an FIR against those responsible for preparing and filing the alleged fake papers.