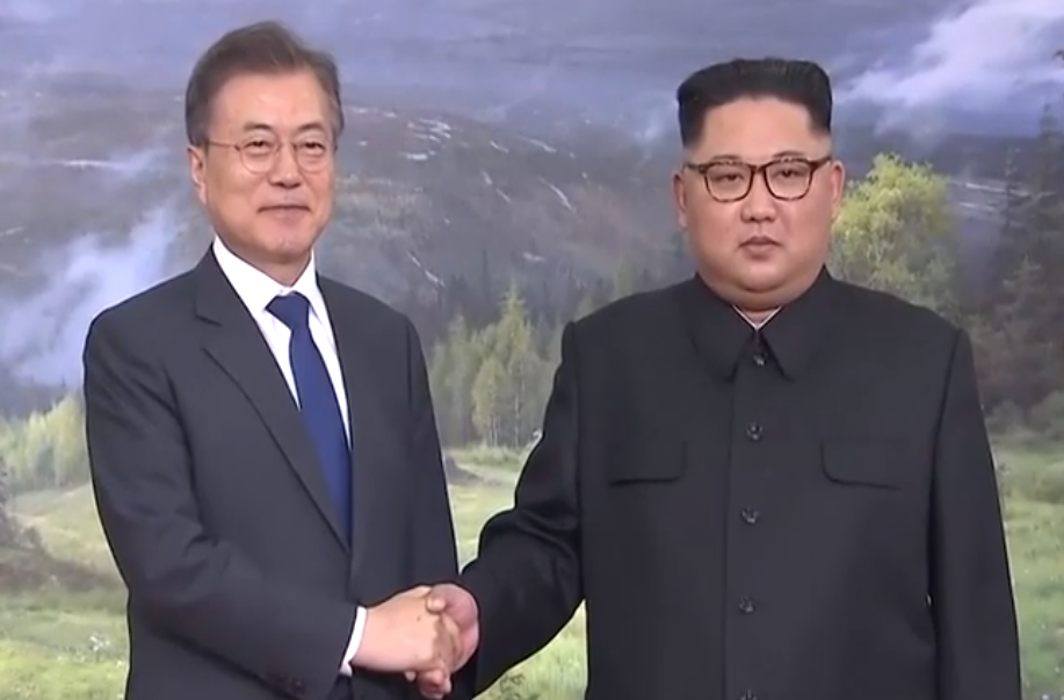 In the fast developing dramatic move the leaders of North and South Korea met late Saturday evening in less than a month after their historic summit and generated hopes that US President Donald Trump and North Korean leader Kim Jong-un will actually meet on June 12 in Singapore.

In a sudden and unscheduled meeting Kim Jong-un and Moon Jae-in spoke for two hours on the North Korean side of Panmunjom in the demilitarized zone and discussed how to implement their declaration following their April 27 meeting and the proposed talks between Trump and Kim.

Read More: North Korea: will not beg the US for dialogue

The two leaders, in the joint statement, after the meeting said, “There is no reason why we should fight each other- we are one nation.”

The office of the South Korean president said the outcome of the Saturday’s surprise meeting will b announced on Sunday.

“What is unclear to Chairman Kim Jong Un is not the will for denuclearization, but the concern that if (North Korea) denuclearizes, whether the US can end hostile relations and guarantee the security of the (Kim) regime,” Moon said.

Meanwhile, US President Donald Trump, who abruptly canceled the summit with North Korea, citing hostile comments from the top North Korean officials, has once again, seemed to revive hopes for a summit, telling reporters late Saturday, “We’re looking at June 12 in Singapore. That hasn’t changed.”

He said there was a “lot of goodwill” for the meeting. “A lot of people are working on it. It’s moving along very nicely.”

South Korean President Moon Jae-in said Sunday that practical talks will be held between US and North Korea “very soon,” and the outcome of those talks will dictate if the June 12 summit will go ahead. Moon added that he expected the practical talks and summit go “very smoothly.”

Moon also suggested a US-North Korean hotline could be opened, and possibly a three-way hotline with South Korea, though he said a trilateral summit should be held first. “I hope if the NK-US summit is successful, through the three-way summit, we can declare the end of the war,” Moon said.

North Korean state media said the meeting took place “all of a sudden.”

Meanwhile North Korean official KCNA Watch released the details of the meeting between the two leaders. It said, “At the talks there were in-depth exchanges of opinions to tackle the matters which should be resolved to quickly carry out the Panmunjom Declaration agreed upon at the third north-south summit and to realize the denuclearization of the Korean peninsula and achieve regional peace, stability and prosperity, and the matters the north and the south are now faced with, and the one of successfully holding the DPRK-U.S. summit.”

The two leaders “agreed to hold the north-south high-level talks on coming June 1 and further accelerate the talks of various fields including the ones of military authorities and Red Cross.”

They agreed to “meet frequently in the future to make dialogue brisk and pool wisdom and efforts, expressing their stand to make joint efforts for the denuclearization of the Korean peninsula.”

North Korean leader Kim Jong Un thanked his South Korean counterpart Moon Jae In for “much effort made by him for the DPRK-U.S. summit scheduled for June 12, and expressed his fixed will on the historic DPRK-U.S. summit talks.”

Moon assured Kim to positively cooperate with each other as ever to improve the DPRK-U.S. relations and establish mechanism for permanent and durable peace.

The official North Korean media said,”The top leaders of the north and the south open-heartedly listened to each other’s opinions on the crucial pending matters without formality, and had a candid dialogue. The meeting offers another historic occasion in opening up a new chapter in the development of the north-south relations. They reached a satisfactory consensus in the matters discussed at the talks.”

Meanwhile, Sarah Huckabee Sanders, a spokeswoman for Trump said on Saturday that a White House team is still heading to Singapore this weekend to work on logistics for the Trump-Kim summit, in case the meeting is reset. She said, the “pre-advance team for Singapore will leave as scheduled in order to prepare should the summit take place”.