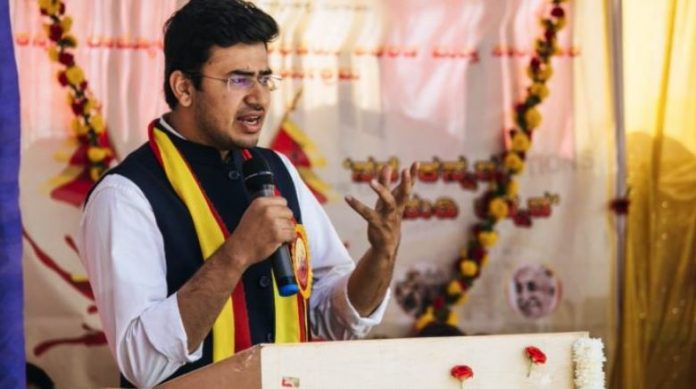 A day after becoming BJP Yuva Morcha president, Bangalore South MP Tejasvi Surya said in a tweet that Bengaluru has become an epicentre for terror activities and many terror modules have been busted recently in Bengaluru. He added that he has asked Home Minister Amit Shah to set up a permanent National Investigation Agency office in the city so that terror would be in control.

Surya said he had asked Shah to provide high-tech equipment to NIA staff so that they can work on terror-related activities in Karnataka. Meanwhile, the Home Minister is said to have assured Surya that he will look into the matter.

After Surya’s remark, Karnataka Congress chief DK Shivakumar slammed him for his statement. Shivakumar tweeted that Bengaluru is a global city known for technology and innovation, terming it an epicentre of terror is highly condemnable and not acceptable. He demanded that the BJP sack Surya for the statement.

Not to miss a beat in the slugfest, Chief Minister BS Yeddyurappa supported Surya while congratulating Prime Minister Narendra Modi and Home Minister Shah for agreeing to set up a permanent cell for NIA in Karnataka. Yeddyurappa said Surya has just said Bangalore is an epicenter of terror in the sense of the increasing terror activities in the city every passing day.

The MP had cited the recent mob attacks at the city’s KJ Halli and DJ Halli areas on August 11 when police stations were attacked, public properties vandalized, set on fire, and vehicles were burnt down. He said all this activity indicates that many terrorist organizations are using Bengaluru as their center for carrying out anti-India activities.