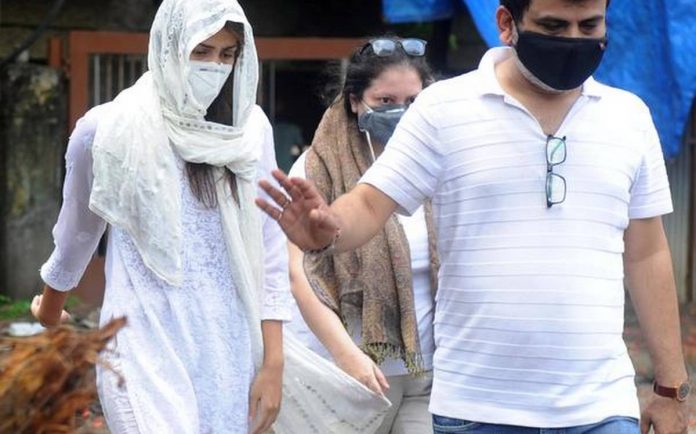 The Mumbai Police on Tuesday registered a case against deceased actor Sushant Singh Rajput’s sisters Priyanka Singh and Meetu Singh of abetment to suicide following a complaint filed by actor Rhea Chakraborty on Monday. The complaint said Rajput was prescribed medication for anxiety over WhatsApp, which is illegal without a physical consultation, and that Rajput died by suicide in 5 days after the prescription. Vikas Singh, the Rajput family’s lawyer, dismissed the charge and said there was no criminality involved.

Mumbai Police said the case has been transferred to the Central Bureau of Investigation which has taken over the case as per Supreme Court orders. The case of abetment to suicide has been registered against Priyanka Singh, Meetu Singh, Ram Manohar Lohia Hospital, Delhi’s Dr Tarun Kumar and others.

Rhea Chakraborty said in her complaint that it was important that the actions of the doctor and Priyanka Singh and others be investigated for providing the unlawful prescription. The complaint, based on WhatsApp chats between Rajput and his sister from June 8, said the prescription, which is alleged by Chakraborty to be forged, said Rajput had been diagnosed at a Delhi out-patient facility while he was in Mumbai.

The complaint states that Dr Kumar appears to have prescribed medication controlled under the NDPS Act without any consultation as mandated by law and the drugs were prohibited from being prescribed electronically under the Telemedicine Practice Guidelines issued in March 2020.
She said the prescription was a fabricated and false document as, according to her, it reflects Sushant as an OPD patient when on that date and time he was in Mumbai and not Delhi.

The WhatsApp chats seemed to suggest that Priyanka Singh asked Rajput to take three medicines prescribed for depression and anxiety over some time and included an SOS medicine for anxiety attacks.

Chakraborty claimed in her complaint the deceased actor showed her the messages and she tried to dissuade him from consuming anything not prescribed by his doctors. She said he insisted on taking only what was prescribed by his sister.

Bollywood actor Shraddha Kapoor is set to feature as a Naagin (serpent) in an upcoming trilogy to be helmed by Vishal Furia...
Read more
Load more