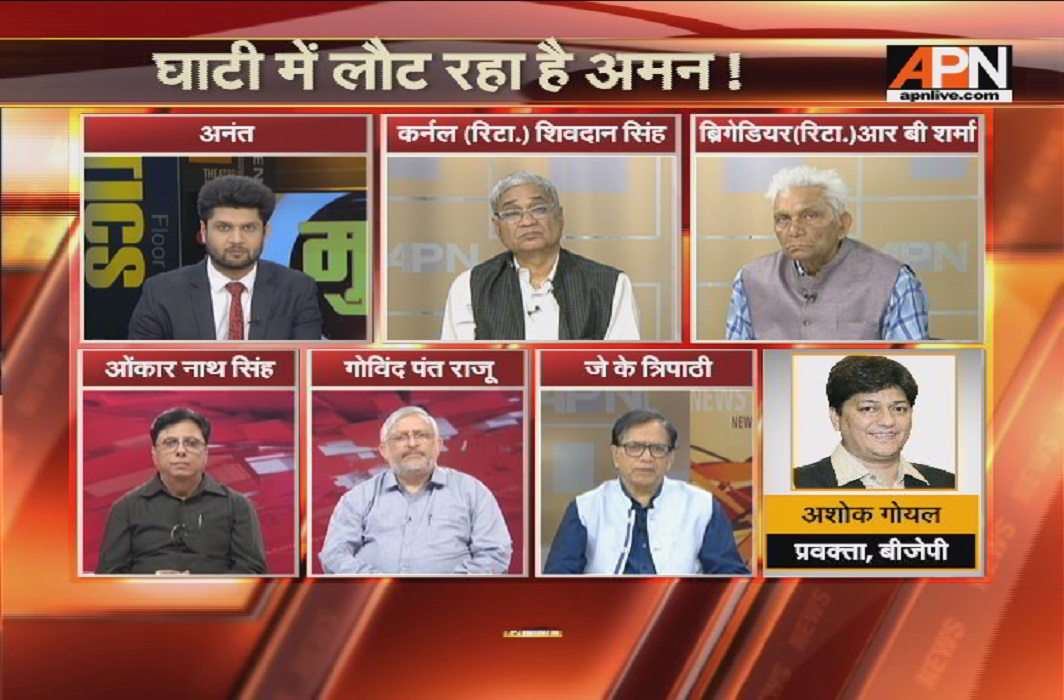 Mudda praises government’s two-pronged approach of interlocution and cutting off finances of the separatists in valley, says efforts of Dineshwar Sharma have proved successful

A 20-year-old Kashmir footballer, who joined terror outfit Lashkar-e-Taiba recently, has surrendered before the security forces after his mother’s emotional appeal to return home. Meanwhile, in the wake of killing of a Tehreek-ul-Mujahideen (TeM) militant Muqees Ahmad Mir in a shootout with police in Zakura area of Srinagar, JKLF chief Yasin Malik has been arrested while Hurriyat leaders Syed Ali Shah Geelani and Mirwaiz Umar Farooq have been put under house arrest.  Is the Indian government’s newly-adopted policy in Kashmir bearing fruit?

Tripathy made the opening remarks. He cited rights violations in Pakistan-occupied Kashmir and said these have taught the Kashmiri youth not to trust the Pakistani authorities as well as the separatists and start believing in the Indian government instead.

At this, Congressman Singh said that India should not have adopted the hard line on stone-pelters earlier. He praised the decision to appoint an interlocutor in the valley and said that the efforts of Dineshwar Sharma seem to have proved successful.

Tyagi then voiced the question, “How should we treat stone-pelters?”

Brigadier Sharma (retired) replied to his query. He said India has recently reversed its carrot and stick policy and this seems to have paid off. “Thus far, we used the stick on our own people and gave the carrot to separatists. But the stone-pelters are children. We should have gone after those who are packing their schoolbags with stones. Our new policy focuses on cracking down on the separatists and terrorist outfits. The NIA has made arrests and cut their finances. At the same time, we have been telling the kids to focus on their lives and careers. We are telling them about India and encouraging them to dream the Indian dream. The message has gone out to the parents of the kids as the latest incident bears evidence,” he said.

Col Singh (retired) explained ISI’s role. “After the Bangladesh war in 1971, Pakistan decided to teach India a lesson. It sent ISI after India. Taking a leaf from the CIA’s book in Afghanistan, ISI began applying its tactics in the Valley. It opened a war on two fronts—on the social media where it recruited youngsters and on the ground where they first offered protection to and got on their side the crime bosses such as Farooq Ahmed Dar aka Bitta Karate who has 40 murders to his name and Yasin Malik who has 22; he killed two Air Force officers in broad daylight,” he said.

Raju agreed that the Indian government and NIA’s “attacking the middlemen of Kashmir terror has worked out wonderfully”.

Tripathi harked back to the days when the Indian government would give money to the Hurriyat in a bid to change its leaders’ minds. “After the NIA action, they have been weakened and are in a state of despair. Then again, Pakistan’s human rights violations in what they call Azad Kashmir, Baltistan, Balochistan and other places have become international knowledge resulting in added pressure on the funders and the minders,” he said.

Sharma agreed with Tripathi. He said that though it was not a matter of policy but such underhand dealings did take place at the behest of governments. “Several governments continued with this way of functioning and passed their tenure without taking any proactive steps, leading to intensifying of the problem. But the previous government and the incumbent one have done their bit to expose Pakistan’s motives in Kashmir before the whole world,” he said.

Onkar Singh slammed former Jammu and Kashmir chief minister Farooq Abdullah who, he said, has been “making controversial statements to stir up trouble for a while now”.

Goyal praised the BJP’s two-pronged strategy of interlocution and cutting off finances of the separatists in Kashmir fulsomely.