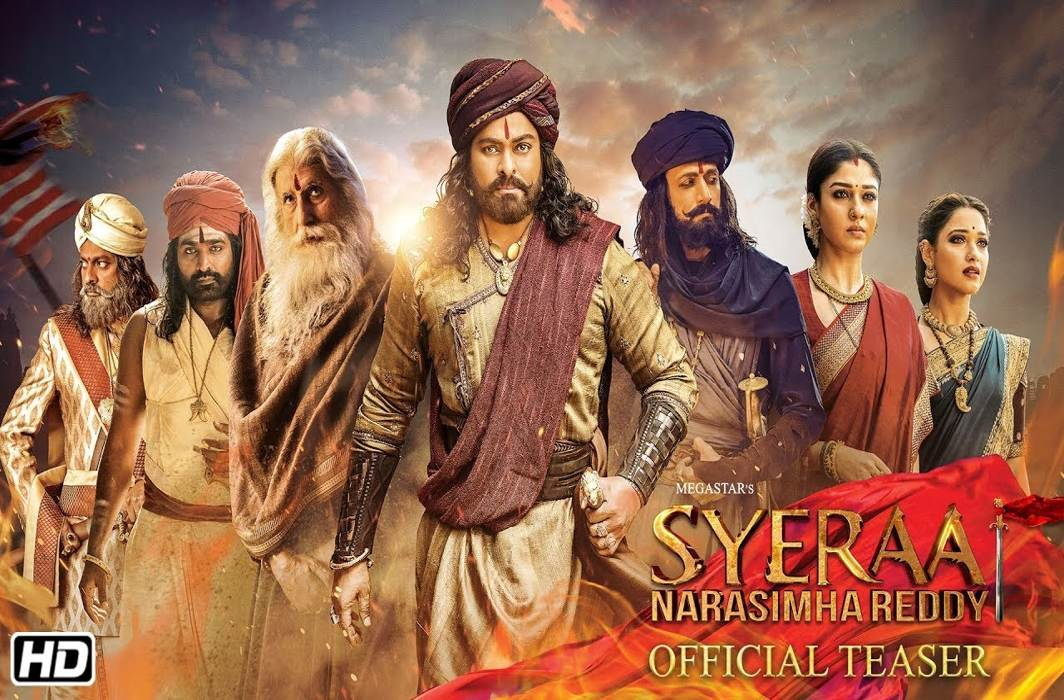 The teaser along with intriguing posters of the characters of  the film ‘Sye Raa Narasimha’ has left fans super excited.

The film is a period drama starring Chiranjivi in the role of freedom fighter Uyyalwada Narasimha Reddy. It also stars Bollywood superstar Amitabh Bachchan in a significant role, along with Vijay Sethupathi, Tamannaah, Nayanthara and Sudeep. According to the sources Bachchan plays a cameo role in the film. He plays the role of Reddy’s guru Gosaayi Venkanna.

However the teaser only glorifies Chiranjivi and the other actors appear only for few seconds, nevertheless people are very happy as the promo is an out-and-out Megastar’s show. He looks fierce as a warrior and sports an intense look throughout the teaser, it’s a visual treat. The movie set in 1850s shows how Uyyalawada Narasimha Reddy was the first person to revolt against the Britishers.

The film is set to be released in 5 different languages: Telugu, Hindi, Tamil, Malayalam and Kannada. After Saaho this movie is the biggest project of Tollywood produced by Chiranjivi’s son Ram Charan. It is supposed to go on floors on October 2 2019.

If sources are to be believed Superstar Rajnikanth and actor Mohanlal lent their voices for Tamil and Malayalam version respectively.

In an interview Ram Charan said, “He didn’t even charge for his flight tickets. We couldn’t push him after a point.” Agreeing to what Charan said, Chiranjivi stated, “That is a great thing. That way, Mr Bachchan didn’t even allow me to keep a private jet for his travel. I asked him about his accommodation and he said that he’s doing it for our friendship. We know each other for a long time. That way we are so lucky to have him on board.”