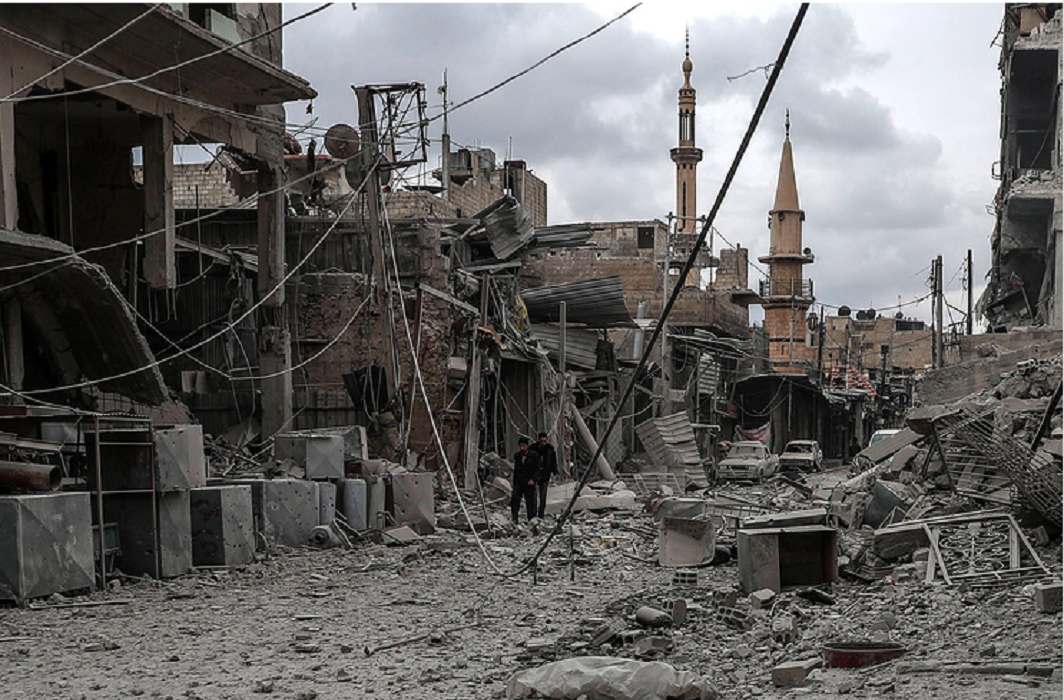 Amidst conflicting reports about developments in Eastern Ghouta, US and Russia were critical of each other’s policies and perceptions. Russian President Vladimir Putin has warned that his patience with militant attacks is not indefinite as terrorist groups stationed in the Damascus suburbs continue to shell the capital indiscriminately while the US representative at UN has accused Russia and Syrian of violating ceasefire.

Rusian President Vladimir Putin, while responding to a question posed by TASS news agency about situation in Eastern Ghouta, during joint press conference with Austrian Federal Chancellor Sebestian Kurz in Moscow on Wednesday said, “As is known – in any case, we in Russia know this well enough – some shells crash even on the territory of the Russian embassy and trade mission. Are we going to tolerate this indefinitely? Of course, not.”

Putin pointed out that in the region there were quite a few extremist forces and members of terrorist organisations that had been included in the corresponding UN lists and the latest resolution by the UNSC that the struggle against these organisations must go on. He was quoted saying, “Bombardments from there continue unabated. On some days missile and mortar strikes reach 50-60.”

Russian President recalled that in his latest conversations with Germany’s Federal Chancellor Angela Merkel and French President Emmanuel Macron it was agreed to open a humanitarian corridor to let children, injured and all those in need of assistance leave the conflict zone.

Meanwhile, US representative at UN Kelley Currie, while speaking at UNSC meeting on Wednesday, condemned the Syrian government’s continued aerial bombardment on Eastern Ghouta, that has been under opposition control since 2013.

She asserted, “Despite the unanimous call for a ceasefire, the regime’s attacks continued unabated. Hundreds of Syrians have been killed or injured since we passed the resolution on Saturday.”

She further said, “Such an attack demonstrates Syria’s complete and utter contempt for this council and the United Nations.”

Meanwhile, Russian Ambassador to UN Vassily Nebenzia, has told UNSC that Russia is doing everything it can to ensure the effectiveness of the daily five-hour humanitarian pauses.

However, he blamed rebel forces for targeting the corridors designated for humanitarian operations with mortar shelling. “We trust that the opposition leaders have a serious-minded approach and that their words will be met with deeds,” he added.

Nebenzia further clarified, “We understand that terrorists remain a legitimate target for military operations and that there will be no ceremonial approach for them.”  He further said that efforts must be made to “effectively neutralise” the presence of the al-Qaeda offshoot in Eastern Ghouta, Jabhat Fateh al-Sham, earlier known as Nusra Front.

On Monday, Russia had said that it will implement five-hour “humanitarian pauses” to allow for the evacuation of civilians and the entrance of aid convoys.

Aljazeera reports that despite the UNSC resolution, shelling and air strikes did not stop and have resulted in the deaths of at least four people. Residents of the enclave said government warplanes launched several attacks in early hours of Wednesday. A resident who wanted to remain unidentified, was quoted saying, “There have been no evacuations whatsoever- not medical, not humanitarian, nothing.”

Osama bin Javaid, Aljazeera correspondent stationed at Syria-Turkish border said “The second day of this so-called truce or pause went away without any major developments on the ground. No aid convoys went inside because the United Nations and other aid workers have been saying that this is too short of a window without any guarantees of whether they would be able to make it back.”

US representative at UN Currie described Russia’s five-hour “humanitarian pause” as “cynical, callous and in flagrant defiance of the demands of (UNSC resolution) 2401”.