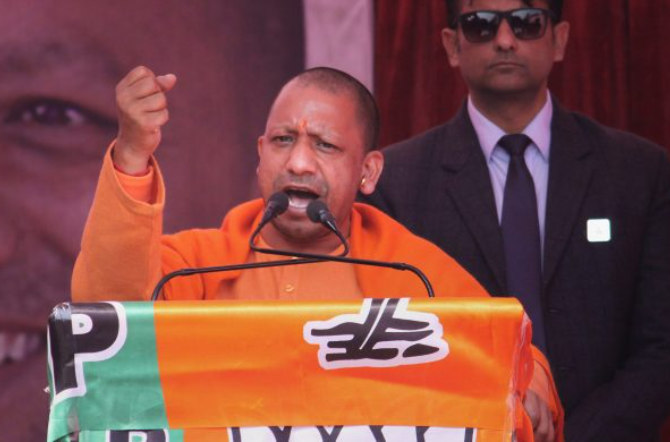 Uttar Pradesh Chief Minister Yogi Adityanath on Sunday accused previous governments of the Samajwadi Party and the Bahujan Samaj Party for practising appeasement politics and claimed that only people who say Abba Jaan got rations in the state till the BJP took over the reins.

Abba Jaan is a term used mostly by Muslims for their fathers. With elections round the corner, the Chief Minister’s statement is seen as the return of communal politics to the main stage for the BJP. The swipe was also seen by some as one aimed for rival Akhilesh Yadav, son of former Chief Minister Mulayam Singh Yadav.

Smarting over a newspaper ad goof, the Uttar Pradesh Chief Minister set the tone for next year’s Assembly elections addressing rallies in Kushinagar and Sant Kabir Nagar, where he laid foundation foundation stones of projects worth crores of rupees.

Addressing a rally in Kushinagar, Adityanath said there is no place for appeasement politics under the leadership of Prime Minister Narendra Modi. Without naming the party, he said that the people of the state will not tolerate pro-Taliban casteist-dynastic mentality that shot at the devotees of Lord Ram. He also dubbed Congress as the mother of terrorism and the Samajwadi Party a Bichchu (scorpion).

His remarks with communal undertones was called out by many on social media including former Jammu and Kashmir Chief Minister Omar Abdullah who termed it blatant communalism.

The Yogi Adityanath government has been criticised for Covid mismanagement in Uttar Pradesh that left over 22,874 death. The state had also faced an acute shortage of hospital beds, oxygen and other essential medical supplies during Covid second wave.

In the 2017 Assembly elections, the BJP won a landslide 312 Assembly seats while the Samajwadi Party got 47 seats, and the BSP 19 and the Congress only 7 seats.

In other India News, Priyanka Chopra has now opened up more about her husband and said her husband is a diplomat, but she is like a Mirchi.