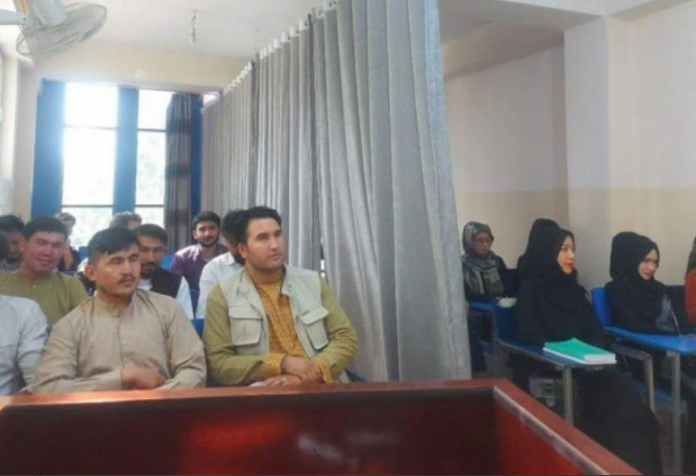 Journalists from Afghanistan’s local news agency on Tuesday shared images of a classroom in Ibn-e-Sina University, Kabul, where a curtain was raised to separate men and women.

In the photos shared by a local news agency Aamaj News, male and female students can be seen sitting in a classroom with curtains between them.

Students across Afghanistan have started returning to university for the first time since the Taliban stormed to power.

Teachers and students at universities in Afghanistan’s largest cities – Kabul, Kandahar and Herat – told Reuters that female students were being segregated in class, taught separately.

The Taliban have issued a detailed instruction specifying how women attending universities should dress inside the classrooms, the AFP reported on Monday.

The Taliban have ordered the women to wear Abaya and Niqab if they want to attend university and have made classrooms segregated by sex.

The new order does not have any mention of burqa which covers the entire body, but the niqab effectively covers most of the face.

Earlier, the Taliban ordered that women will be allowed access to higher education, but there will be no provision of co-education and male teachers will not be allowed to teach female students.

Right after the Taliban’s takeover of Afghanistan, a group of western countries had said that the Taliban’s treatment with girls and women would depend on how they lead the country.

However, the group had banned the girls from school and women from university and work during 1996-2001.

Read Also: Who is Mullah Hasan Akhund? One of original 30 Taliban members likely to head Afghanistan

Despite assurances in recent weeks that women’s rights would be honoured in accordance with Islamic law, it is unclear what that will mean in practice.

A Taliban spokesperson did not comment on the photograph shared by the local journalists of Afghanistan but a senior Taliban official told Reuters that such dividers were completely acceptable as Afghanistan had limited resources and manpower. For now, it is best to have the same teacher teaching both sides of a class, he said.

In other India News, With dengue cases are on the rise, blood banks have started facing a shortage of platelet components