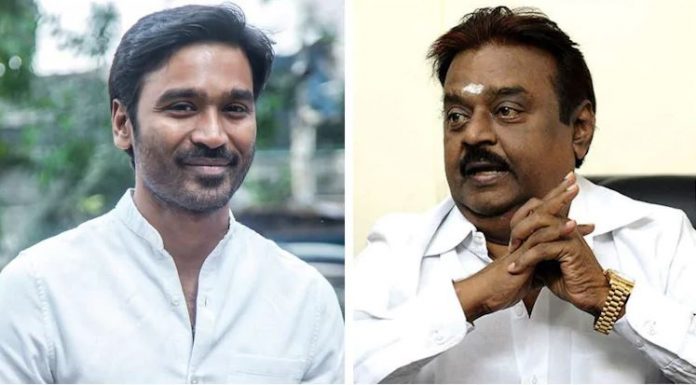 The Chennai Police control room on Tuesday received a call from an anonymous person twice claiming that bombs were planted in the house of actor Dhanush and Desiya Murpokku Dravida Kazhagam chief Vijayakanth in Chennai. According to the details received from the anonymous person, the bombs were placed in Dhanush’s Abhiramapuram house and Vijayakanth’s house in Virugambakkam, both in Chennai city limits.

Reacting to the call, the police dispatched bomb squads to the houses of the both the stars. Thorough checks at the houses revealed the calls to be hoaxes. After the search operation, the police found that both calls were made by the same person.

Bomb threats to Kollywood actors have become a common thing over the past few months. Earlier, Rajinikanth, Suriya, Ajith and Vijay received fake bomb threats from anonymous call. However, the police found that these calls were made by a mentally-unsound person.

On July 18, the police conducted a search operation after receiving a call from an anonymous person about a bomb in actor Ajith’s house in Injambakkam. The bomb squad searched the entire house and called it a hoax. The police officials did not confirm if the caller to Dhanush and Vijayakanth’s houses is the same person who called in July.

Meanwhile, the fans are worried about these calls and requested the police to take strict action against the person who made these calls. With the political atmosphere in the state getting charged ahead of the campaign to the Tamil Nadu Assembly due in May 2021, actors are prime targets for such mischief. Though the parties in the state have actors supporting them, the elections will see a push by the BJP to get a greater say in the state as evidenced by the joining of actor Khushbu Sundar recently. Tamil Nadu had seen a cleaving among journalists over their political loyalties recently and looks like film stars will also have to face a similar reckoning.

Pakistan has announced its squad against arch-rival India a day before the high-voltage match on Sunday, October 24. Skipper Babar Azam announced...
Read more

Pakistan has announced its squad against arch-rival India a day before the high-voltage match on Sunday, October 24. Skipper Babar Azam announced...
Read more