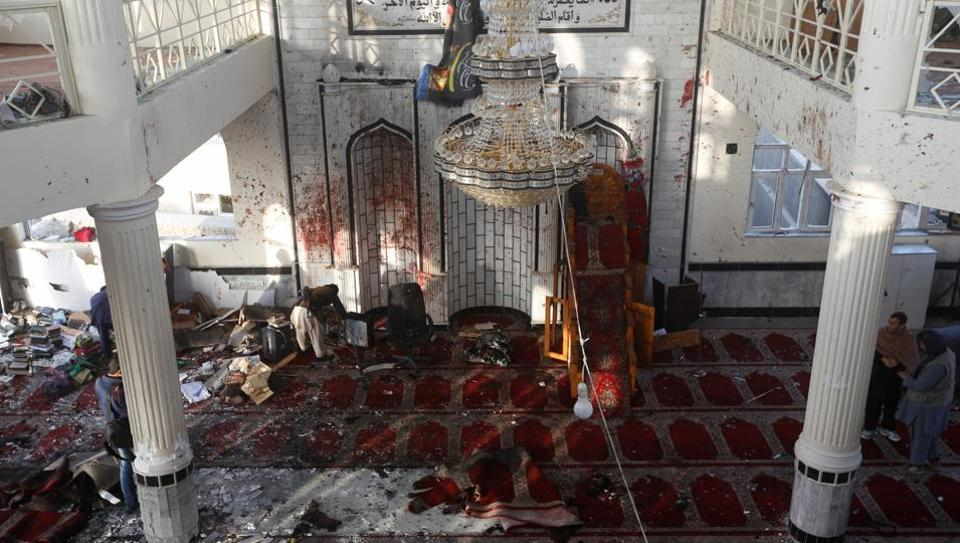 US using IS as “tool” to destabilize region, says Hamid Karzai

In a bid to create sectarian violence in Afghanistan, suicide bombers struck two mosques, a Sunni mosque in Ghor province during Friday noon prayers while Shia mosque was bombed in Kabul during the evening prayers. At least 72 people were killed in both the attacks.

A suicide bomber walked into Imam Zaman Mosque, a Shiite mosque in the western district of Kabul and detonated his explosives vest.  Interior Ministry has confirmed at least 39 people were killed and 45 wounded in the mosque situated in Dasht-e-Barchi neighborhood of the capital.

According to Kabul based Tolo News, the eyewitnesses said the suicide bomber was in the middle of the mosque among the worshippers when he detonated the explosives embedded with his body.

Shia community leaders have said they were sure that Afghanistan’s IS affiliate was behind the attack. Dasht-e-Barchi is a sprawling neighborhood where majority of people are ethnic Hazara, who are mostly Shia Musims.

Earlier in the day, the suicide bomber struck a Sunni mosque in Daleema district of Ghor province during Friday noon prayers and killed 33 people, including a pro-government warlord Abdul Ahed, who was considered to be the target of the attack.

President Ashraf Ghani has strongly condemned the attacks and has called them inhuman and against the values of Islam. He said that the attacks were aimed at creating division among the people, adding that these nefarious acts will not yield any result and will not affect the unity of Afghans.

Terrorists can shed our blood, but they cannot break our will. RIP Gen. Abdiyani, a brave son & soldier of our soil. https://t.co/32nfRBplfl

Daesh also known as IS has claimed responsibility of the attack.

Meanwhile, Hamid Karzai, former President, has alleged that US uses the Islamic State (IS) insurgency as a tool in Afghanistan, aimed at destabilizing the whole region. He was speaking to Russia Today (RT) TV on the sidelines of the Valdai Forum in Sochi, Russia on Saturday. He also talked about reports of “unmarked foreign helicopters” providing support to the terrorists.

Karzai further said, “The support to Daesh (IS) in Afghanistan is not definitely meant for the purpose in Afghanistan. The US has already established itself in Afghanistan. It doesn’t need to have a reason to establish itself there. It must be for objectives beyond Afghanistan, to cause trouble in the region.”

Hamid Karzai condemns in strongest terms the terrorist attacks on worshipers in #Kabul and #Ghor provinces that killed and wounded dozens...

According to reports members of Islamic Movement of Uzbekistan militant group, who are in hundreds in Afghanistan, have pledged allegiance to the IS.

Taliban and IS have surged their attacks in the country during the week. Overnight on Wednesday into Thursday, Taliban took responsibility of killing 58 Afghan security personnel during attacks on security installations in the east and western parts of the country. They nearly wiped out an army camp in southern Kandhar province.

US and NATO forces have formally concluded their combat mission in the country at the end of 2014.