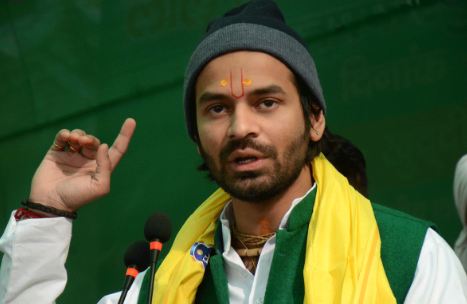 Tej Pratap Yadav, the eldest son of Lalu Yadav and Rabri Devi, is a former state minister of the Rashtriya Janata Dal (RJD). In 2015, Tej Pratap was elected to the Bihar Legislative Assembly from Mahua constituency and served as Health Minister in the Mahagathbandhan government of the RJD-Janata Dal United led by Chief Minister Nitish Kumar. This year, Tej Pratap has had to change his constituency and contested from Hasanpur in Samastipur district.

But that is not the whole story. Tej Pratap is controversy’s favourite child, not man, since his penchant for saying the wrong thing at the wrong time has let him in a lot of soup and croutons. For instance, when he was the health and environment minister under Nitish Kumar, he had a radical solution for controlling pollution in Bihar. Taking a leaf and a branch from Marie Antoinette, the Queen of pre-Revolution France, who said the poor should eat cake if they don’t have any bread, Tej Pratap said horse-riding would be a great initiative to control vehicular emissions.

Tej Pratap Yadav was embroiled in another controversy in 2017 when he threatened to skin Prime Minister Narendra Modi alive after father Lalu Prasad’s security was downgraded from Z+ to Z.

Born in Patna, the 32-year-old was married to Aishwarya Rai, the granddaughter of Bihar’s ex-Chief Minister Daroga Prasad Rai. However, relations turned sour and a divorce case is pending in court. Rai had alleged that Tej Pratap is a drug addict and a cross-dresser who likes dressing up as Radha and Lord Krishna. Yadav’s estranged father-in-law Chandrika Rai is contesting from Parsa in Saran district on the Janata Dal-United ticket.

Earlier, there were reports of a rift between Tej Pratap and Tejashwi Yadav. They said the elder son of Lalu Prasad was miffed at not being given adequate importance in the Yadav family when it comes to politics. However, Tej Pratap later dismissed such reports in public. After the Lok Sabha election 2019 results, Tej Pratap had blamed Tejashwi for the RJD debacle. In those elections, RJD had failed to get even a single seat in the state. On the other hand, the BJP-led National Democratic Alliance (NDA) had won 39 of the 40 seats. Congress had bagged one seat.

With exit polls hinting at a revival of the RJD, Tej Pratap may have more to say about his brother as time goes by.