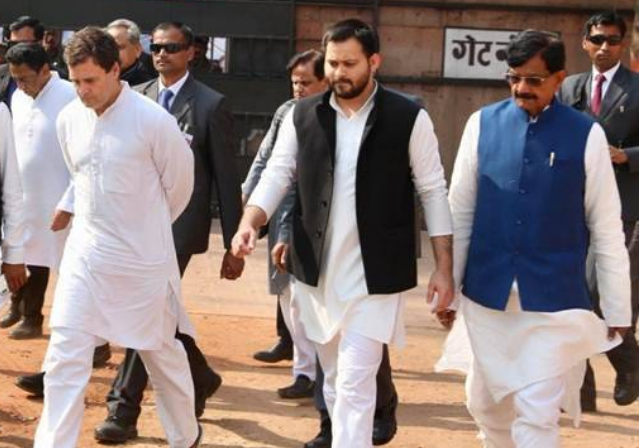 Tejavi Yadav, the Rashtriya Janata Dal leader and the younger son of Lalu Prasad Yadav on Monday said the Trinamool Congress (TMC), the Samajwadi Party (SP) and the Nationalist Congress Party (NCP) should come together with Congress keeping aside their ego and differences to save the country.

During an interview with the Indian Express, Yadav has revealed the strategy for the general election 2024 and said no opposition front can be formed without Congress and it will also be difficult to defeat BJP without taking West Bangal Chief Minister Mamta Banerjee and the LJP chief Chirag Paswan along.

Highlighting the role of Congress in the opposition, Yadav said the Congress is a pan-India party and has to become the foundation of any such Opposition, so it is the responsibility of Opposition leaders to present an alternative to the country.

There are at least 200 seats where the Congress and BJP are in a direct contest and in areas where the regional parties are strong, they should be put in the driving seat, he said.

In an interview with the Indian Express, the Leader of Opposition in Bihar Legislative Assembly, Tejashwi Yadav have answered all the questions linked to the 2020 Bihar Assembly polls and 2024 general elections.

Tejashwi also said that it is too late now and the Opposition should start making a strategy on how to approach the common man of the country. There is no scarcity of issues, people are suffering from the BJP government and are admitting that they voted for the wrong party, he said.

Speaking on the Bihar assembly elections last year where the RJD had fall short of majority marks with a narrow margin to the winning NDA, Yadav said the RJD managed to get the mandate inspite of losing the elections.

In the Bihar Assembly polls, the mandate of the people was with the Mahagathbandhan but the entire country knows that the decision of the Election Commission was in favour of NDA, Yadav claimed. The Bihar polls results shows that the RJD is not just a Muslim-Yadav party, as is often believed, but the A-Z party, he said.

On the question of giving 70 seats to Congress in Bihar Assembly elections, Tajashwi said that the grand old party has been its oldest ally and RJD has to make sacrifices to keep the alliance intact.

In other India News, Aamir Khan and his ex wife filmmaker Kiran Rao met Jammu and Kashmir’s LG Manoj Sinha at Raj Bhavan in Srinagar and discussed the new film policy of the state.