Tejashwi Yadav dares Nitish Kumar, says arrest me if your government has the power 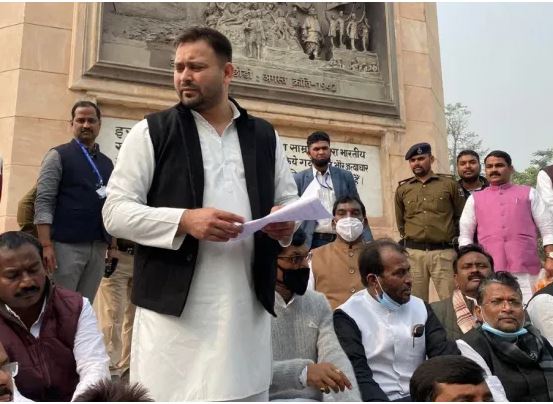 Tejashwi Yadav, the leader of the opposition in Bihar on Sunday, hit out at Nitish Kumar government, daring it to arrest him for protesting in support of farmers’ demands to repeal the Centre’s three contentious laws. His statement came after a case was filed against him and 18 others for protesting without permission amid the coronavirus pandemic. Apart from this five hundred unidentified people have also been accused of violating the law by being present in the meeting. The FIR has been registered against accused under multiple sections of the Indian Penal Code and Epidemic Diseases Act for violating Covid-19 protocols and gathering near Gandhi Maidan without the permission of the administration.

Calling Bihar Chief Minister Nitish Kumar a coward, Tejashwi Yadav condemned the charges leveled by the state government on the peaceful protesters. Yadav warned Kumar in his tweet and dared the Bihar government to get him arrested if it has any real power. He added that he will not surrender. Standing in solidarity with the farmers, who have been camping at Delhi borders in harsh cold for 10 days, Tejashwi said he is ready to be hanged for farmers.

The RJD also criticised the National Democratic Alliance government for using false pretexts to book Yadav and his colleagues for supporting farmers. The party claimed that the Bihar government has shown its two-faced character by using false and shallow pretexts to book Tejashwi Yadav for standing with the farmers and protesting in their support.

Earlier on Saturday, the RJD, tweeted a picture of a meeting held in the BJP office, where social distancing norms were not followed. Highlighting loopholes of the meeting, the RJD criticised Nitish Kumar government for not following the Covid norms in the presence of Bihar’s Health Minister Mangal Pandey during the meeting.

In a recent development, the Central government has announced next round of talks with farmers on December 9 after the fifth round talks remained inconclusive on Saturday. Farmers’ leaders have decided to go ahead with the proposed Bharat Bandh call which will take place on December 8.