Tamil Nadu will go to polls in April-May later this year. 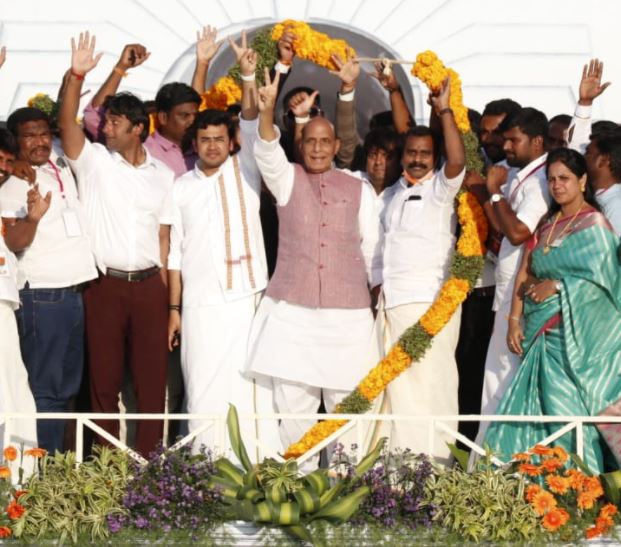 The BJP Yuva Morcha chief and MP from Bengaluru Tejasvi Surya on Sunday addressed a poll rally ahead of Tamil Nadu poll 2021 due on April-May. Calling M.K. Stalin’s Dravida Munnetra Kazhagam (DMK) anti-Hindu, Surya requested the people of Tamil Nadu to vote for BJP in the upcoming Tamil Nadu election to defeat DMK. Referring to DMK’s efforts to paint BJP as a Hindi party, he promised that only BJP respects and promotes all regional languages of India.

He was speaking at a conference of the Bharatiya Janta Yuva Morcha (BJYM) in Tamil Nadu’s Salem in the presence of Union Defence Minister Rajnath Singh. His remarks on Tamil language and culture comes on International mother language day.

While addressing a public gathering in a poll-bound state Tamil Nadu, Surya said that DMK does not represent Tamil Nadu and its people in anyway. Every Tamil is a proud Hindu. Requesting the audience to reject DMK, he said this is the sacred land that has the highest number of temples in the country. Every inch of Tamil Nadu is sacred but DMK is anti-Hindu.

The BJP MP asserted that his party represents the spirit of Tamil Nadu and the Tamil language. He said only the BJP government under the Prime Ministership of Narendra Modi and the NDA leadership in Tamil Nadu can work for the benefit of young people of Tamil Nadu.

Union Minister of Defence Rajnath Singh said that the success of BJP’s Vetrivel Yatra in Tamil Nadu has shaken the DMK and the Congress. Referring to the BJP-AIADMK alliance, he added that only the lotus-two leaves combination can bring prosperity to the people of Tamil Nadu.

Tamil Nadu will go to polls in April-May later this year.